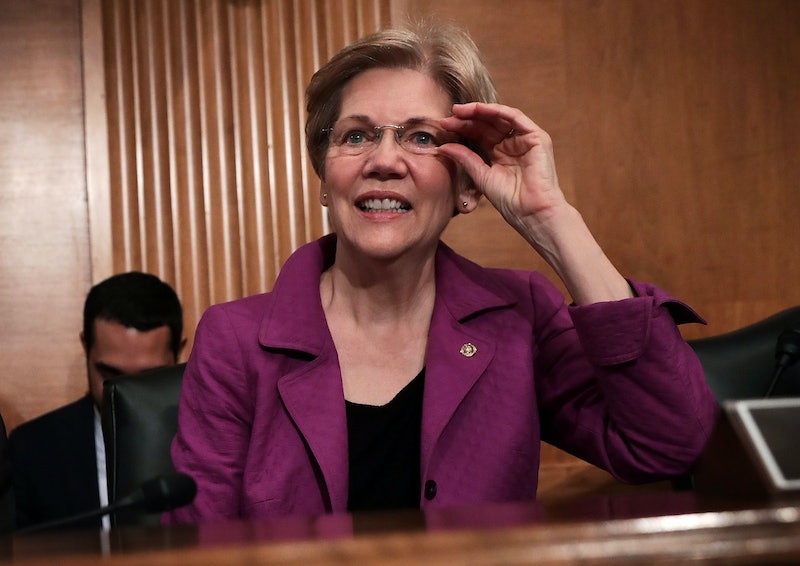 Massachusetts senator and feminist/liberal favorite Elizabeth Warren's Twitter campaign against Donald Trump picked up steam earlier this month. Once Trump became the last man standing in the GOP race and, thus, the presumptive nominee, Warren knew how to aim and fire with force. Unsurprisingly, it escalated fast. Trump fired multiple shots of his own — including the moniker "Goofy Elizabeth Warren" — until finally reaching a fever pitch last night with Warren asking a series of direct and biting questions the celebrity billionaire has had mixed success batting away.

What makes this more than the typical Twitter feud is Warren’s approach these last few days. She has emerged as, arguably, the only prominent politician on Twitter who’s successfully using Trump’s own language and tactics against him without stooping to his level.

A word cloud from her last week and a half on Twitter — her personal account, not her Senator account — contains such Trump lingo regulars as “pathetic,” “embarrassing,” “tough,” “scamming,” “ugly,” “sick,” “weak,” and “lame.” Familiar style, right? Yet, Warren’s arranged these barbs in a way that’s also substantiated with facts; they're not just a wild barrage borne of insecurity (unlike, you know, someone else's tweets). She uses strong language to make a point, not just in an attempt to cover up personal deficiencies by deflecting the heat to others. When Warren uses this kind of language, it’s because she actually has something to say. Take a look:

These tweets are what Trump's would resemble, if he maintained his general strategy and style but actually sprouted some class and working policy knowledge. Warren keeps the zinger aspect of the equation, but doesn’t devolve into anything substance-less or personal. Ahem:

Warren’s tweets are what Trump’s would want to be when they grow up. Lots of other GOPers have tried to take some stand against Trump on Twitter or other forms of social media, but it doesn’t mean much when they’re all still falling in line behind him (see: #eventuallytrump phenomenon). Clinton has done her fair share of tweeting against Trump, but as with the rest of her social media efforts, those tweets often come out rather canned-sounding, churned out dutifully by some aide or intern. In contrast, with Warren, you can tell she’s writing these things herself — and means them. You can sense the passion behind them, just like you can with Trump's. But unlike whatever tweets Trump spews in our general direction, her tweets actually say something meaningful.