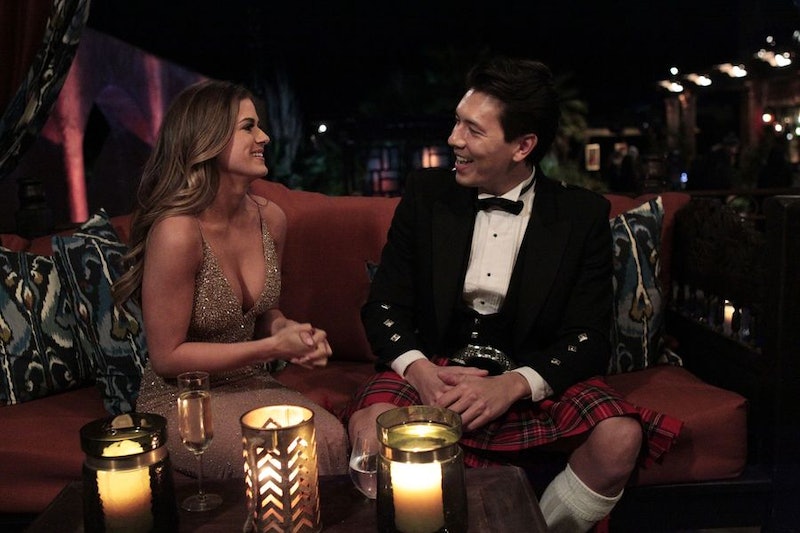 It's that time a year again, friends. A new season of The Bachelorette is almost upon us, and its impending arrival means that we're getting a sneak peek at all of the love-seeking guys vying for JoJo Fletcher's heart. ABC recently released Q&As with JoJo's Bachelorette contestants, and while there are hidden gems in all of their answers (one guy boasts to the world that he doesn't have any tattoos because, "you don't put stickers on a Lambo"), I can't help but scratch my head at one bonkers answer to an equally bonkers question. The question wasn't so much a question as it was a word association problem — all the Q&A asked was this: "Gluten?" Instead of writing down something reasonable, such as "Well, what about gluten?!," Jonathan decided to reply with this: "I don't think that allergy exists."

Anyone who has struggled with finding suitable bread options for their gluten-free lifestyle likely wants to hurl a bagel at Jonathan's head right now. I've got news for you, buddy: Gluten allergies totally exist. Though it's true that studies have been done on whether certain symptoms of gluten sensitivity could be psychosomatic, one thing that is absolutely real is celiac disease. According to the Mayo Clinic, celiac disease is an immune reaction to eating gluten, which can damage the lining of the small intestine over time. One major issue with celiac disease is malabsorption, which can lead to a whole slew of other problems, specifically for growing children, who may not get the nutrients they need to develop properly. Though it's a bit more controversial, people who do not have celiac disease can potentially be sensitive to gluten, which could lead to gastrointestinal issues as well.

Unfortunately, Jonathan's opinion on gluten allergies being a work of fiction probably has to do with the influx of people who are not gluten sensitive or have celiac disease deciding to cut gluten out of their diet, whether it be for the purpose of losing weight or leading a healthier lifestyle. Maybe Jonathan has been on too many dates with women who refuse to eat bread due to a gluten sensitivity, thus causing him to get particularly annoyed by those who claim to be allergic to gluten? If that is the case, here's hoping that no one in the house actually does have a gluten allergy — it doesn't seem like Jonathan will be very sensitive towards them.