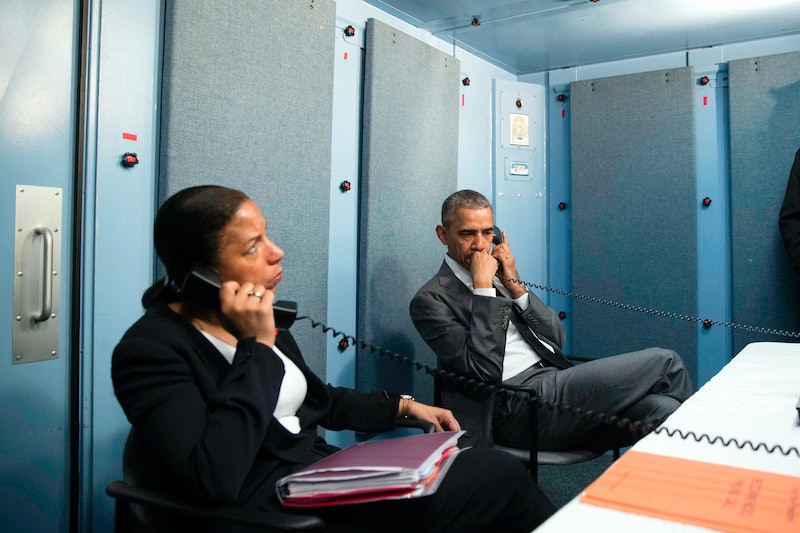 Although the Democratic Party has no official presidential nominee, the Obama administration appears to have already begun making the case against the Republican Party's presumptive nominee. President Barack Obama's national security adviser Susan Rice took a subtle shot at the presumptive GOP nominee Wednesday while delivering the commencement speech at Florida International University in Miami with comments that hint at how the Obama administration might seek to take down Donald Trump in the general election.

While speaking candidly to Florida International University's graduating class about the lack of diversity in the fields of national security and foreign policy, Rice, in a thinly-veiled reference to Trump, warned against listening to "loud" and "intimidating" voices that attack and disparage America's diversity.

"There are voices out there that disparage our diversity — that question whether America should welcome people of all races, religions, and creeds," Rice said in prepared remarks, according to the White House. "Those voices can be loud. They can be intimidating. They can make us feel like we don’t belong. But, you know what? Let fear be their problem, not yours."

Trump earned himself a plethora of both critics and fans when he called for banning Muslim refugees and immigrants from the United States and likened Mexican immigrants to drug dealers and "rapists" at separate events held earlier in his primary campaign.

But Rice aimed to share a distinctly different message than Trump's, one that cited America's diversity as a cornerstone to its success. "What distinguishes us from so many other countries is not just the might of our military or the size of our economy," Rice said. "What sets us apart is our people. It's our innovation, our fearlessness, and our diversity."

She highlighted Apple's Steve Jobs and Cuban poet Richard Blanco as examples of successful and influential immigrants contributing to America's overall progress. "To those who deride our diversity, my answer is: I see why it matters every day, in those who protect this country and grapple with the toughest global issues we face," Rice said.

Yet Rice was quick to acknowledge that America's diversity is not accurately reflected in its foreign policy and national security workforce, adding that the "white, male, and Yale" workforce is unable to fully draw on the strengths such diversity can bring.

"Minorities still make up less than 20 percent of our senior diplomats [and] less than 15 percent of senior military officers and senior intelligence officials," she said. "Groups comprised of different people tend to question one another’s assumptions, draw on divergent perspectives and experiences, and yield better outcomes. Whether we’re confronting ISIL or Ebola, cybersecurity or climate change, solving today’s multifaceted global challenges demand more varied viewpoints and experiences than ever."

Rice isn't the only member of the Obama administration to take Trump to task over diversity. While delivering his own commencement address at Northeastern University last week, Secretary of State John Kerry noted the graduating class of 2016 was the college's most diverse yet. "In other words, you're Donald Trump's worst nightmare," Kerry said. The president himself has also emerged as an outspoken opponent to Trump's White House bid, criticizing the GOP candidate's policies as often as possible.

With immigration set to be a major issue in the 2016 presidential election, and Trump's multiple inflammatory statements on the issue, we're likely going to hear a lot about diversity in the coming months as the Obama administration ramps up its fight to keep Trump out of the Oval Office. But will important messages like the one Rice shared on the importance of a diverse workforce get lost in the political pandering?