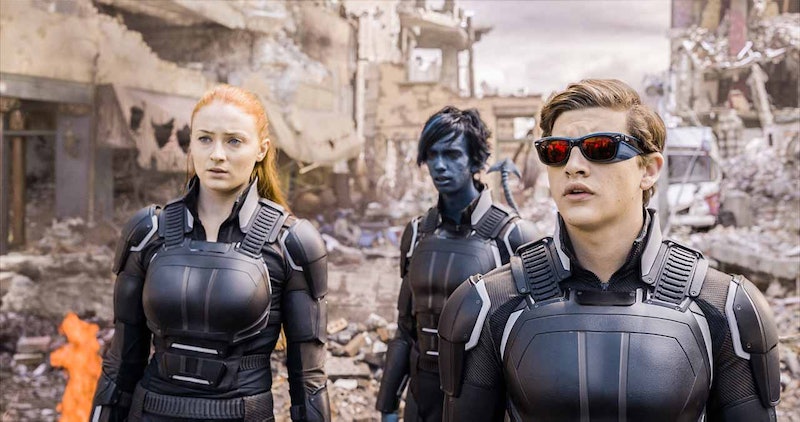 This is the year of the over-stuffed superhero movie. Batman v Superman featured Wonder Woman, the Flash, Cyborg, and Aquaman in addition to its titular heroes, then Captain America: Civil War doubled that output with 12, that's right, 12 costumed heroes. But the most comic book character-filled movie is still to come in X-Men: Apocalypse, which is set to feature no fewer than 15 mutants, plus a few significant non-mutants. So who are all these characters in the X-Men: Apocalypse cast?

Some of them will be recognized by fans of the franchise, since nine of them had roles in X-Men: First Class, X-Men: Days of Future Past, or both. Out of the rest, they are made up of a number of various characters from the comics. Some of these characters appeared in the original X-Men trilogy of movies, played by different actors, but will be showing up as their younger selves here since the film is set in the 1980s. Other characters will be appearing on screen for the first time (at least in any significant way) in the film, to the delight of comics fans everywhere. So here are all the major characters you need to know in X-Men: Apocalypse.

Returning once again is Charles Xavier, the world's most powerful telepath and leader of the X-Men.

The world's oldest and strongest mutant, known in Ancient Egypt as En Sabah Nur. He is awoken in the present (well, the '80s) and wishes to reshape the world according to his mantra of "Only the strong survive".

Professor X's frenemy, the master of magnetism is recruited to become one of Apocalypse's dreaded henchmen in the film: The Four Horsemen.

The shapeshifting mutant known for her villainous ways in the comics is still a hero in this film, and even leads a new team of young X-Men against Apocalypse.

Blue and furry on the outside but a genius on the inside, Hank McCoy continues his run as one of the most loyal members of the X-Men.

A young version of the weather-controlling African mutant, she is recruited as a member of Apocalypse's Horsemen, but don't expect her to stay bad, it's Storm!

Another mutant belonging to Apocalypse's Horsemen, he also was a founding member of the X-Men in the comics and had his feathered wings replaced with metal ones by Apocalypse. Expect one of those things to happen in this movie.

Rounding out Apocalypse's Four Horsemen is this psychically-powered ninja who wields a psy-blade. Like most of the big baddie's henchmen in the film, she's a member of the X-Men in the comics.

After stealing the show in Days of Future Past, the speedster returns to join the X-Men, while also revealing that Magneto is his father.

Wielder of cosmic energy, Alex Summers has grown up a lot since he first appeared in X-Men: First Class.

The young mutant is the brother of Havok, and shoots powerful optic blasts from his eyes anytime they're open. He is recruited as one of the new X-Men in the film.

Also recruited to the new team of heroes, the telekinetic wunderkind is one of the most powerful mutants in existence.

The dark elf-looking German teleporter has a heart of gold despite his evil appearance, and he's yet another young mutant joining up with the X-Men in the film.

The fireworks-producing mall rat appears here as a young member of Xavier's School For Gifted Youngsters.

A non-mutant CIA agent, she was in love with Professor X in First Class before having her memory wiped. Now she's back, and is inadvertently responsible for unleashing Apocalypse unto the world.

Another non-mutant, this military colonel despises mutants and wants to see them eradicated. He's also responsible for affixing adamantium to Wolverine's bones as part of the Weapon X program.

You didn't really think they'd make an X-Men movie without Wolverine, did you? The fast healing old canucklehead flashes his claws in a cameo.

So there you have it, the bajillion characters in X-Men: Apocalypse that you need to know. If superhero movies keep going at this rate, then I expect to see a minimum of 1,684 recognizable characters in this fall's Doctor Strange — not that there's anything wrong with that.

More like this
A New Princess Diana Documentary Tells Her Story Like Never Been Told Before
By Frances Stewart
Everything To Know About The Musical 'Joker' Sequel – & Lady Gaga’s Role
By El Hunt and Sam Ramsden
Stephen Graham’s Wife Plays A Vital Role In His Career
By Emma Madden and Sophie McEvoy
What Is Ben Affleck's Net Worth? At 50, The Oscar Winner Makes 8 Figures Per Film
By Meg Walters
Get Even More From Bustle — Sign Up For The Newsletter