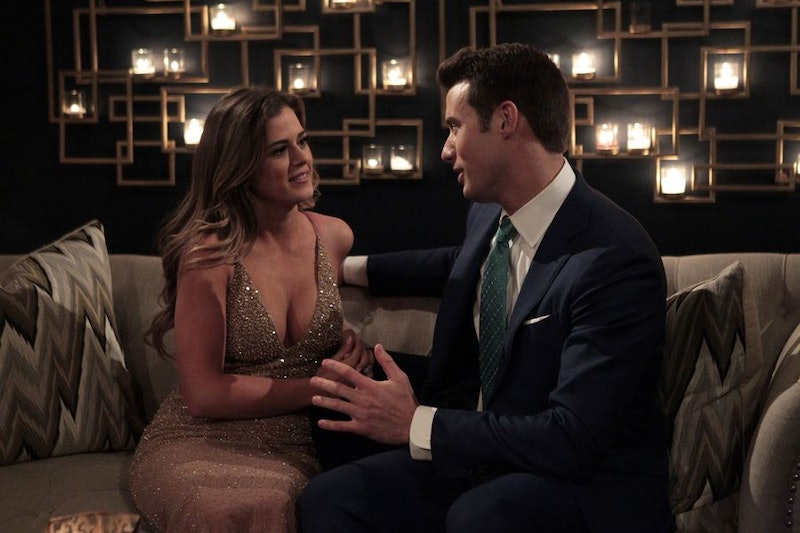 It's once again time for America's Bachelorette to commence her search for true love — or at least, TV's version of true love. This year, JoJo Fletcher will be the one deciding between disturbingly handsome suitors with questionable job titles, and though we won't meet the guys vying for her heart until the Bachelorette premiere on Monday, May 23, ABC has given us some information so that we can get to know the men trying to wifey up. One of these handsome dudes is James S., a man whose job title is the fairly embarrassing "Bachelor Superfan." (That means unemployed, right?) But it's not James' job that is waving some red flags — it's his philosophy on dating. Bachelorette contestant James S.'s Bachelorette bio state that he loves it when his date "doesn’t attempt to pay for the bill," and that there are "two things a woman shouldn't touch on a date: the door and the bill."

There are a ton of different opinions on who should pay on a date, with some people arguing that because women make less than men do overall due to the gender wage gap, it's perfectly fine for men to foot the bill at Ruby Tuesday's. Another argument states that women spend more money to prepare for a date, and therefore are already spending their share of dinner before the appetizers even arrive. While I totally agree that women typically get the short end of the stick financially, that isn't many men's reasoning for thinking they should pay on a date. Yes, it might be polite to treat someone to dinner, but there's also this bizarre expectation that comes with a man always paying for a date — one that says that women are people who need to be taken care of.

That's not to say that I don't, personally, want a free meal. I attended entirely too many college club meetings because free pizza was promised to potential members. While I can't speak to exactly what's behind James' insistence that women shouldn't pay the bill, the statement doesn't sit well with me. In my opinion, the idea of a man always paying for a date, no matter what date number it is or who asked whom out, sets up a power dynamic I'm not comfortable with. Though this might not be James' intention, the idea that men are the ones who automatically pay on a date suggests that women are always the ones being pursued, taken care of, and "treated." Shouldn't there be an equal opportunity for a woman to be the aggressor, or, damn it, pay for her own cheeseburger, if she so wishes?

Personally, I like to go by this rule for dates: If you asked someone out, you should be the one treating, regardless of gender. (It would get extremely complicated for same-sex couples or non-binary people if only the man or woman was supposed to pay, right?) If it's not a clear case, offer to split the bill — someone will most likely decide to foot the entire thing, but at least everyone got their shot to make a contribution. I'm all for trying to sweep someone off their feet, but most women I know can take care of themselves — they should at least be offered the opportunity to go Dutch on a bill if they want to.

As for James as a Bachelorette contestant, he's definitely going to have to read the room when talking to JoJo. Maybe JoJo really does want to be treated like a princess, and James' insistence on paying for everything date-wise will make her feel cared for and special. But if she's not so into that idea, James may have to bend his views if he wants to be the one who takes home the final rose.