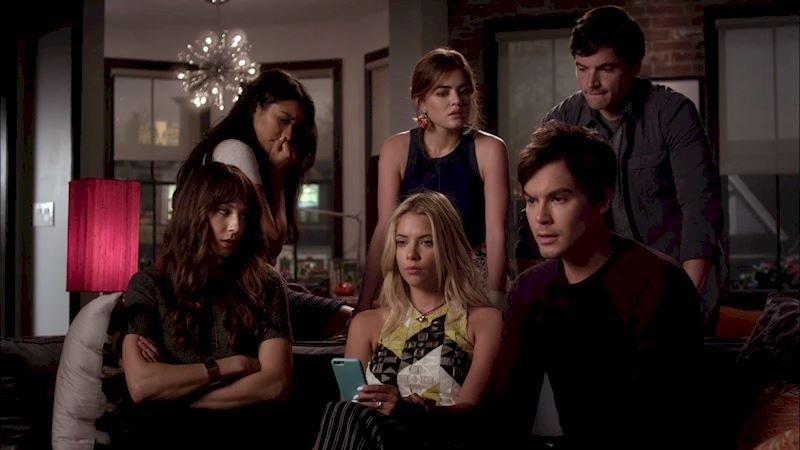 There have been plenty of "oh my God"-worthy moments on Pretty Little Liars — in fact, pretty much the entire show is built on these jaw-droppers. The Liars have certainly ended up in sticky situations before, but the new trailer for Season 7 of Pretty Little Liars, which premiered on Instagram on Thursday, might show them in their most dangerous, scariest situation yet. Do the Liars kill someone in Season 7? That's exactly what it seems like, and it's setting us up for one very, very dark season.

The rumors that the Liars could be guilty of murder have been circulating for a while now, ever since showrunner I. Marlene King stated in her spoiler video that the girls will make the biggest mistake of their lives in Season 7 — and that Uber A would be holding that mistake over their heads. What could be bigger than Aria killing Shana in self-defense, or blinding Jenna with a "prank?" It might be the fact that the Liars killed someone who was totally innocent — something that the trailer definitely seems to suggest as a possibility. In the trailer, we see a distraught Emily, Aria, and Spencer standing over what seems to be a grave. Emily says that she's not sure if she can live with whatever it is they are about to do, but Spencer tells her that this is the only way: "It was a well thought out plan. When it ends like this, it's called murder." Umm, I just got goosebumps. (Spoilers ahead for the PLL book series!)

So just what the heck happened that caused the Liars to off someone? If the PLL television series is following Sara Shepard's books, it could be a case of mistaken identity. In the books, the Liars, having been tortured and tormented by none other than Alison DiLaurentis herself, think they see the (supposedly dead) Ali on vacation in Jamaica. Emily gets freaked out, and accidentally sends the girl she believes to be Ali over the ledge of a cliff. The Liars witness the "accident," and vow to protect Emily, even though the girl wasn't actually their long-time tormenter. Could the same thing happen to the TV version of the Liars?

It seems very plausible. I'm not sure that the Liars would be this freaked out about killing someone if it was 100 percent in self-defense, like how Emily was forced to stab Nate or Aria had to push Shana. The Liars also aren't psychopaths: They would need a real reason to want to hurt someone. Perhaps it all has to do with those latex masks we saw in the Season 6 finale: someone could be wearing the mask of a threatening person, like the mask of Detective Wilden, which caused the Liars to attack them without real merit.

No matter what the reason, it's clear from the trailer that the Liars are in for some serious trouble when Season 7 picks up. Here's hoping that they get out of this one unscathed.