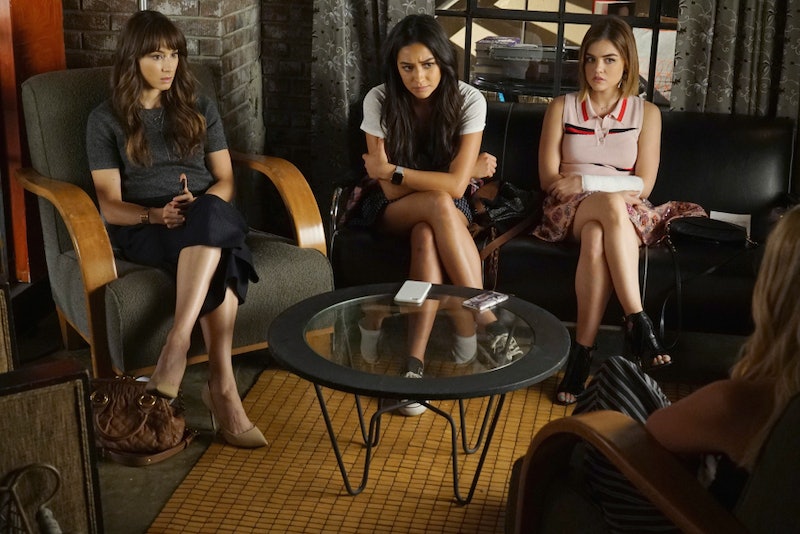 True to her word, I. Marlene King managed to deliver an unforgettable Pretty Little Liars Season 6 finale, which not only resulted in Hanna's possibly deadly abduction, but also allowed viewers to finally come face to face with the highly anticipated twin. That's a lot of information to consume over the course of a one hour, but as per usual, it still leaves us with a ton of unanswered questions about PLL Season 7. Is Hanna really dead? Was Charlotte in contact with Mary Drake? Who the heck is A.D.? There is still so much that needs to be explained, which is why diehard fans are doing everything they can track down as many Pretty Little Liars Season 7 spoilers as they can get their hands on. And luckily for us, King is more than willing to dish out a few teasers.

The showrunner recently released a spoiler video that included four major hints about the upcoming season that's guaranteed to send your Rosewood withdrawal into complete overdrive. So as a way to help organize this important information, I thought it'd be best to round up everything we know so far about Season 7 based on King's video as well as any other details that have managed to bubble to the surface along the way.

1. It Will Blow Your Mind On A Weekly Basis

In the video, King says Season 7 is the beginning of the end for the series, so you can expect there to be epic reveals pretty much every single week. Prepare your hearts (and your next door neighbors) accordingly.

There's no need to wonder whether or not this mystery A.D. and Uber A are two different people because according to King they are definitely one in the same. This tell us that Mary Drake is not Uber A, but that doesn't mean they aren't working together. Perhaps this could even be another secret child of hers. Just saying!

3. It's Going To Be Full Of Romance

King referred to the upcoming season as the "most romantic season ever," so expect to see your favorite 'ships come together at one point or another as the storyline progresses. That's a pretty big deal, considering that all of the main couples were split up for the majority of Season 6. It seems as though Season 7 will look to rectify that. Just so long as this means more shirtless Caleb scenes, then I'm a happy camper.

4. The Liars Will Make The Biggest Mistake Of Their Lives

Not only that, but King says that Uber A is going to use this mistake to fuel A's final game. Does this mean that the Liars will actually kill someone? That certainly seems to be one possibility, but when it comes to this show, you can never be too sure what the writers have in store. But whatever ends up happening, it's not going to be good.

During a recent chat with Entertainment Weekly, King revealed that Jason DiLaurentis will be returning to Rosewood early on in Season 7, which will consist of "a very awkward family dinner with his aunt and his sister coming up soon." But hey, that's to be expected when the person you're dining with just so happens to look exactly like your dead mom. (Family reunions, am I right?)

6. Other Characters May Return As Well

King has made it very clear to fans that she wants to see certain characters return to the show at some point, including Julian Morris' Wren — who has already promised King that he'll come back — as well as Paige, who King confirmed herself would be returning via social media. Let's hope this means that Emily's love life will finally get some attention next season.

7. The Premiere Will Open In The Woods

According to the description King tweeted out, the scene will take place in the forest outside Rosewood. Is she referring to the woods surrounding the Lost Woods resort? Possibly. Or maybe this is some sort of flashback that will give us better insight to what's going on in the present day. Either way, prepare to become even more scared of wooded areas than you already were. (Also, someone should notify Taylor Swift that no, we are not out of the woods yet.)

Suffice to say, I think we can all agree that Season 7 can't get here soon enough.