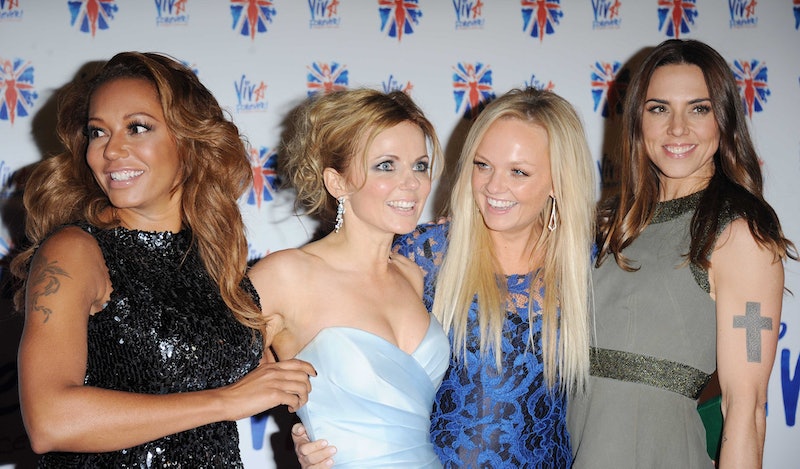 I'm about to spice up your life and no, it won't be too much. According to The Mirror, the Spice Girls are recording new music. Yes, I'm being totally serious. No, I am not being totally calm. This is a heaven-sent moment. This is why we all invested in coconut oil and poured it over our lives, so that only good things could come our way. The mere idea of new music from the Spice Girls is faint-inducing, so I am hoping this report turns out to be true.

According to The Mirror, on May 10, Melanie Brown, Emma Bunton, and Geri Halliwell were seen entering London's Play Deep Studios. They were reportedly there for 48 hours, working on previously unheard music. Honestly, though, it's anyone's guess what really happened at this point. I like to think they were watching Spice World and mainlining Chupa Chups.

Either way, this reported music studio reunion is exciting and supremely important for a few reasons. First, there are reportedly 2017 concert dates being lined up in select cities around this celestial orb specifically to facilitate the Spice Girls reuniting onstage. While it's understandable that Victoria Beckham may sit this one out in favor of her fashion and beauty endeavors, where does Melanie Chisholm stand since she wasn't at the studio? Also, is this possible tour mean the reason that there is said to be new music from our favorite proponents of girl power? If there's new music on the way, then it would make sense to get into the studio as soon as possible. Those big pop hits don't write themselves!

Then again, now that the Spice Girls are older, will they still want to stick to their pop roots? Every musician goes through phases, so what if this mysterious reunion at Play Deep Studios was home to the women tinkering with a new sound? If they are writing new music, then it's sure to be as ear worm-y as their greatest hits.

"It’s funny, because back in the day people thought we had everything written for us but we’ve always written all our own songs... If we do anything, we will be writing it from scratch. We are all group texting and speaking a lot," Mel B. told The Mirror in an interview. There is also reportedly an as-yet unnamed fourth album in the works, meaning this reunion could mark the beginning stages of this exact album.

Regardless of what could possibly be in store for the Spice Girls, the fact of the matter is the reunions are happening (they've posted photo evidence, after all; although they didn't confirm what they were doing) and hopefully the music magic will soon follow. It's been 20 (20!!!) years since "Wannabe" first hit the radio airwaves, beginning — for many of us — a lifelong love of empowering pop music and readiness to shout "Girl power!" from the rooftops.

Are you ready for #SpiceGirls2017?