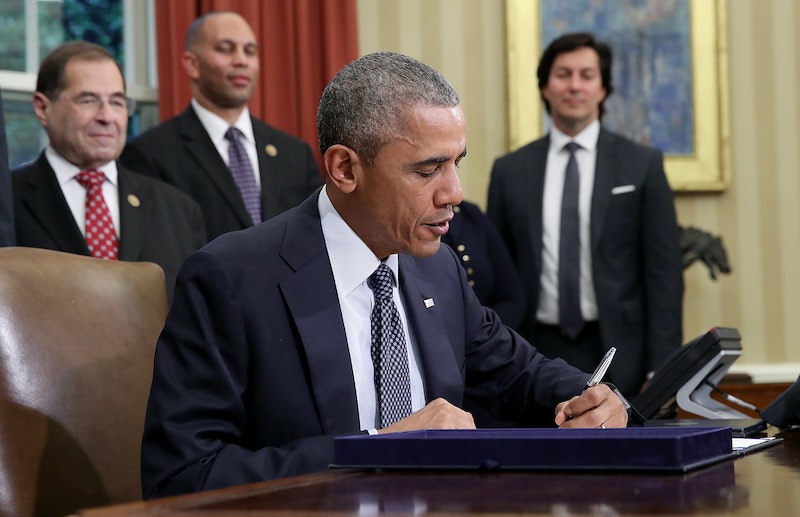 The Obama administration will soon direct all public schools in the country to allow transgender students to use the bathroom that matches their gender identity, The New York Times reported on Thursday. The order, which the administration plans to issue on Friday, will not have the force of law behind it, but will contain the "implicit threat," according to the Times, that schools could face lawsuits or loss of federal funding if they refuse to comply. This development is separate from the multiple legal battles the administration is engaged with North Carolina over the state's restrictive bathroom law.

“A school may not require transgender students to use facilities inconsistent with their gender identity or to use individual-user facilities when other students are not required to do so,” the letter will read. "As is consistently recognized in civil rights cases, the desire to accommodate others’ discomfort cannot justify a policy that singles out and disadvantages a particular class of students.”

The letter will be signed by officials from the Department of Justice and Department of Education and sent to every public school district in the country on Friday. Schools will not, by virtue of the letter itself, be legally obligated to follow the administration's orders. But the administration could determine that refusing to comply is a violation of Title IX, the federal law banning discrimination in public schools. That, in turn, would result in those schools losing federal education funds. It's unclear yet whether the administration will take this route.

All of this is unfolding parallel to a separate legal dispute between the federal government and the state of North Carolina over the same issue. In March, the governor signed a bill into law that requires residents to use the bathroom that corresponds with their biological gender; this, effectively, is a prohibition on trans residents using the bathroom of their choice. The Justice Department argued that the law was discriminatory and sent the state a letter demanding that it not be enforced. But the state refused, and as a result, North Carolina and the Justice Department sued each other on Monday.

Republicans will almost certainly accuse President Obama of overstepping his authority with this directive, and it's unclear what actions, if any, they'll take in response. But by issuing this order, the Obama administration is doing two things: It is applying pressure to public schools to enact inclusive bathroom policies, and in a more symbolic sense, ensuring that bathroom access for transgender Americans remains an active topic of political conversation for the foreseeable future.