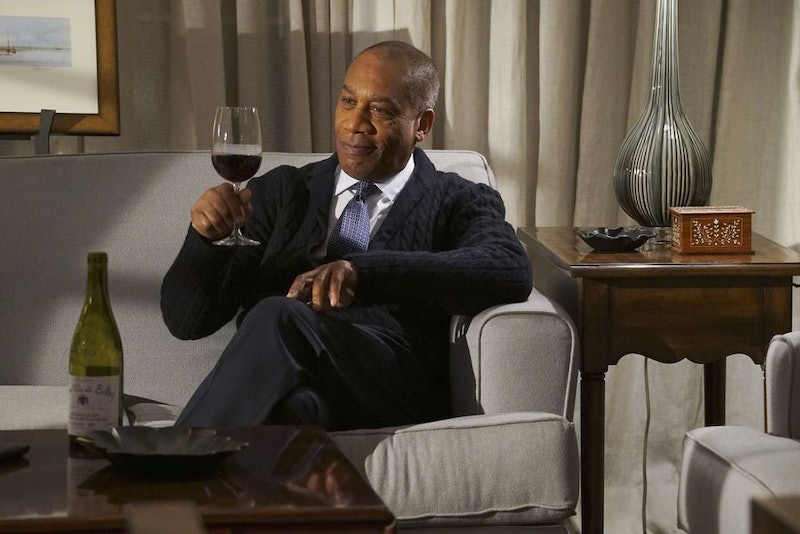 Over the past five seasons, Olivia Pope has proven that she is capable of anything on Scandal, whether it's seamlessly covering up crimes or actually killing someone in order to protect a huge national secret. But there's one thing she's never been able to do: Escape her father, who is one of the scariest characters on TV ever. Rowan — aka Command — has eyes and ears everywhere, and he's a master manipulator, especially when it comes to his daughter and the men in her life. But is it possible that on Thursday's Scandal finale, Olivia and Jake finally escaped Rowan? Maybe, but I have a feeling it won't be that easy.

Over the past season, Jake's become a son to Rowan as he's groomed him to be Edison's running mate in the presidential election... until that all fell through and Edison dropped out of the race. Especially since then, Jake hasn't exactly liked being stuck in Rowan's clutches, but there was no way to get away from him — until now. After he comes to Olivia asking for help, she and Huck devise a plan, and if you're going to get advice from anyone on something like this, it should be Huck. And shockingly enough, his plan works.

Just like Huck tells her, Olivia waltzes into Rowan's house in broad daylight, announces that Jake is going to be Mellie's running mate instead, and that he needs to come with her to get ready for that night's speeches. So what does Rowan do? Hold a gun to Jake's head, of course, threatening to pull the trigger if he leaves. But Olivia called him out and said there's no way he'd actually do it, and I thought for sure that someone was going to die in that house. But amazingly, nobody did. Olivia was right to call his bluff. As evil as he is, Rowan didn't have it in him to shoot the person who had become like a son to him.

Once they actually make it to the convention, Jake asks Olivia to run away with him instead so they can live a normal life now that they're free from Rowan. OK, seriously, how many times have various men asked this lady to skip town?! But like always, she turns him down. She's not born for mediocrity and she's not going to settle for a boring life. Can you blame her? She's literally good at everything.

Now, Jake's forced to run in a race he didn't choose to be part of... and you know this isn't the last we're going to hear from Olivia's dad, especially not after the shady way he watched the speeches from home. Something's cooking in his scary brain, and I think all this freedom they think they have is an illusion. Ugh, is it September yet?! I need to know why he was so happy swirling that wine around.

More like this
What’s New On Netflix: A Victoria Justice Rom-Com & The Return Of David Letterman
By Arya Roshanian
Selena Gomez’s ‘SNL’ Hosting Debut Had Twitter Gushing Over ‘Barney’ & Wigs
By Stephanie Topacio Long
The Time Traveler’s Wife Book Has A Heartbreaking Ending
By K.W. Colyard
‘SNL’ Referenced Jesse Williams’ Broadway Leak In A Chaotic Theater Sketch
By Grace Wehniainen
Get Even More From Bustle — Sign Up For The Newsletter