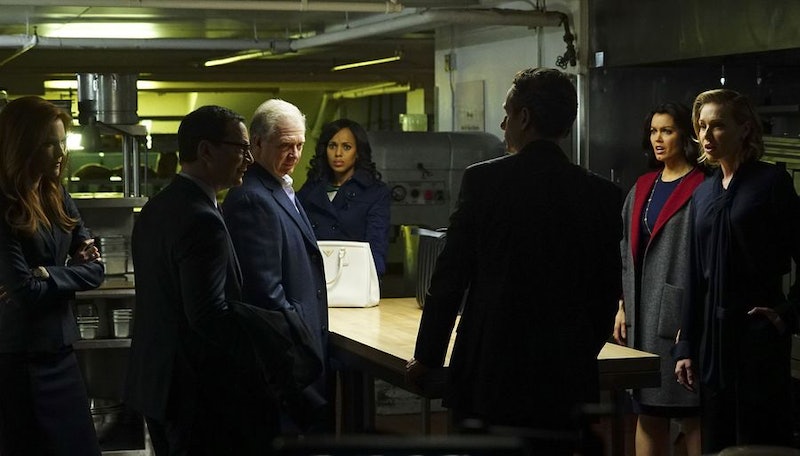 Another Thursday, another episode of Scandal.The only thing that's different? This is the last one we'll have for awhile, and it's left me with so many questions — especially where the show's presidential elections are concerned. Now that the democratic and republican nominees have been settled (Senator Vargas and Mellie Grant, duh), on this week's Season 5 finale, the time has come for the candidates to figure out their running mates, which led to the biggest shocker of the episode. Guess what? Cyrus is running as Vargas' vice president, which means this race has just gotten that much more intense.

At first, Vargas wanted Jake, because who wouldn't? But as part of her ploy to free Jake from Rowan's clutches, Olivia snapped Jake up as Mellie's running mate first, so that plan was a no go. Vargas came to Cyrus, asking him for his advice, and it seemed obvious that he was going to suggest David Rosen, who happened to be Cyrus' first choice for VP. But once it came time for the republican convention, there was a quick plot twist. Actually, Cyrus is running as VP, and it's possible he could finally be gaining the control over the White House that he's always dreamed of having.

There's only a couple of flaws in Cyrus' plan, though. Number one: Olivia has considerable dirt on him, and she doesn't give up that easily. Would you really want to run in a race against Olivia Pope? Didn't think so. And then, there's number two: Tom. Remember how Cyrus has been hooking up with Tom? Yeah, that's over. Less than 24 hours after confessing to Tom that theirs is the most honest and meaningful relationship he's ever been in — and Tom offering to murder Michael so that Cyrus can get his daughter back — he totally flipped the script. At the convention, Cyrus broke the news that he and Michael are actually back together (because it's way better for his campaign) and that he and Tom are done. He said this to a known hit man. Is it just me, or is there some serious revenge coming Cy's way?

Let me know when it's September. 'Til then, I'll be re-watching this season, trying to figure out where this is going to go. Either way, one thing is for sure: Someone is going to end up dead. Have you seen Tom's face of betrayal?! It's just the Scandal way.