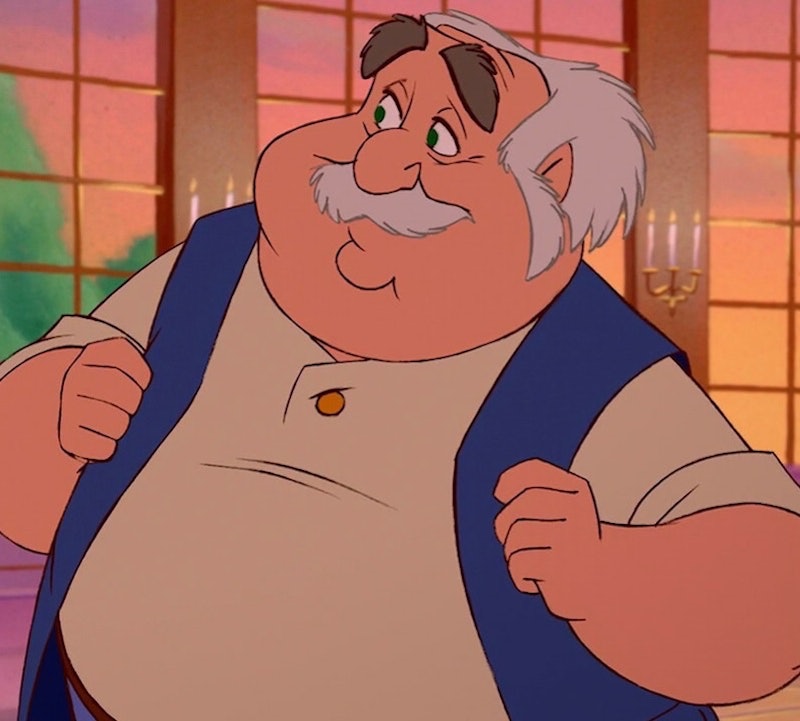 Between my toddler years and and my mid-20s I’ve probably watched Beauty and the Beast more times than would be socially acceptable. In some respects, I know the movie by heart, and, in others, I feel like I’m still discovering new angles on the fairy tale classic. Through the goggles of adulthood I’ve recently discovered something unacceptable. Although the misogynistic tendencies of Gaston are the most frightening part of the movie, it’s very possible that Belle’s father Maurice is the true villain of Beauty and the Beast.

OK, OK, “villain” is a very strong word there. Villainy usually involves cunning and power, and Maurice is kind of just a hapless idiot. Even so, his idiocy pretty much causes every main conflict in the entire film, bottom to top. Like, this is why it’s just easier to kill off Disney parents before the plot really starts, you know? But nope, like a cockroach, Maurice survives the movie thanks to the ceaseless efforts of his too-wonderful daughter. Lord knows he doesn’t make it easy for her, though.

Unconvinced? Let me just deliver a dozen things to consider when it comes to Maurice’s role in Beauty and the Beast, and then try to argue that he’s not the instigator of everything that goes wrong.

1. He Helps Further Alienate His Daughter From The Other Members Of The Poor Provincial Town

Belle has a reputation for being "strange but special," and that sets her apart from the rest of the community. I think she could definitely leverage herself to a better social position if she also didn't have "the inventor's daughter" stuck to her resume; Maurice is strange but awful, and not able to invent anything that isn't ridiculous. "Hot chick who reads," however, is a workable brand. Trust me, I know. This dude is holding her back.

2. He Has No Sense Of Direction, Which Puts Both Him And The Horse In Danger

He decides to take the dark spooky forest route and, shocker, gets lost on the way to the fair (which, mind you, he's going to to showcase his stupid log-chopping machine). He could've mapquested his route before leaving like a grown-up, or listened to Philippe, but nope. Terrible.

And logically I don't know if hitting up the spooky castle in the woods is ever a good idea.

5. He Gets Captured And Then His Teenage Daughter Has To Go Save Him

After poor Philippe runs to her, saving his ass from a life of imprisonment.

6. Sure Enough, Said Teenage Daughter Gets Taken In As A Slave/Life Partner For A Hideous Monster As A Trade-Off

He protests, but Belle knows she has to step up, because this guy's not going to break himself out with an invention anytime soon.

Your daughter just put her life on the line! You can't take a breath and be like, "Hey guys, I know this sounds insane, bear with me, but Belle got abducted by this horrible monster, I'd really appreciate your help with this pressing matter?" That's what I'd do in such a case, obviously.

8. They Also Very Fairly Don't Believe Him Because, Again, Being Bonkers Is Basically His M.O.

9. And Then He Tries To Go Out And Save Belle On His Own And Sure Enough His Teenage Daughter Ends Up Being The One To Save Him Again

Which also interrupts her date, how rude is that?

10. Subsequently Belle Has To Convince Them That Maurice Is Not Insane, Which Inadvertently Gets A Mob Started To Kill The Beast

And that's a whole mess that Belle, once again, has to clean up.

11. And At The End Of The Day, It Looks Like He Signs Off On His Teenage Daughter Getting Married To The Man Who Imprisoned Them Both

OK, so I guess you could still argue that everything ended up alright, and you could even argue that, without Maurice, there wouldn't be any film. I feel you. All I'm saying is you should definitely watch Beauty and the Beast again sometime soon... and just try not to get infuriated by all the drama he causes.