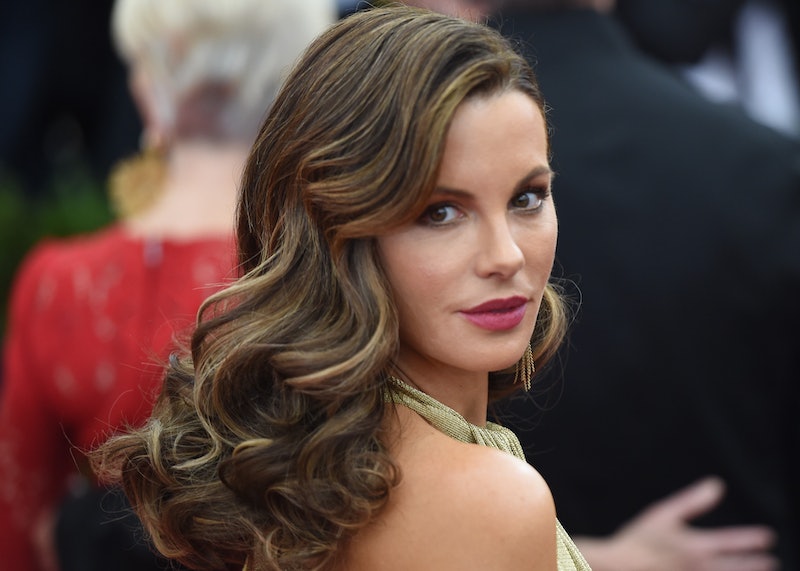 I owe my overbearing obsession with *destiny* and aggressive love for random street book sales to Serendipity. Romantic movie lover or not, no one can deny that film is a romantic comedy iconic. Upon her latest endeavor, Love & Friendship, Kate Beckinsale reflects on the fan-favorite film nearly 15 years since its release. It's my opinion that Serendipity convinced non-believers to have a little more faith in what’s written in the stars (and basically became a bible for hopeless romantics like me). But does the woman who became a face of pop culture romance believe in the whimsical idea of fate the movie so convincingly conveys? Prepare to be delightfully surprised.

One may assume that Beckinsale, who’s played a part in so many romantic tales, is a believer in true love and a hopeless romantic herself. However, at 42-years-old, she finds herself as unsure about love as the rest of us. “I mean, I struggle with it,” she admits. “I don't know if it’s realistic to be [a hopeless romantic], but, I think we all have the streak.” The actress explains why losing her father at such a young age (she was only five when he passed) caused her to have a continuous “longing” for a male figure to provide her with that “comfort zone” in her life. “I understand that kind of hopeless romantic,” she says.

But for Beckinsale, being a hopeless romantic doesn’t always mean in romantic relationships. (And if you recall, last fall it was announced that she was divorcing from husband Len Wisemen after 11 years of marriage.) “I’m fairly practical,” she explains. “I’m fairly romantic about friendships. I’m really passionate in terms of my girlfriends and my gay friends. If I fall for somebody, even on a friendship level, that’s something that’s a full-body experience for me.” She adds that a number of her best friends are those she met in elementary or middle school. “Once I find a keeper, they’re really a keeper.”

While I appreciate her unique take on romance and how it can live in various forms, I can’t help but wonder if loving movies, like the oh-so romantic Serendipity, makes me a complete sucker for old-school love. “There’s something very sweet and innocent about that relationship in that movie,” she says of the 2001 flick, in which she starred alongside John Cusack. “I love that it’s all chance and fate.”

According to Beckinsale, men are also obsessed with Serendipity. “What’s funny about that movie is that if people come up to me in the street or at the store and say, ‘My favorite movie is….,’ and they say Serendipity, nine times out of 10, it’s a man,” Beckinsale explains. “I find [it] really amazing considering I’ve done so many movies considered a ‘guy’ movie. I can pretty much predict if a guy is gonna come up to me to mention their favorite movie. It’s always Serendipity.”

Pretty incredible, right? To Beckinsale, it’s inspiring. “It’s a hopeful sign that they like that movie so much. All the machine guns I’ve fired, the boys like Serendipity better!”

But after all of the fandom and life experience, did Beckinsale’s own movie instill a belief in fate in her? “It kind of depends [on] what day you catch me on, to be honest,” she says. “I have those days when I really do and then I can have days where I really don’t,” she says laughing. “I think it really depends on what’s going on.”

Maybe none of us will ever really have love or its inexplicable powers totally figured out. In the meantime, will I still be a sucker for the possibilities star-crossed love? Call me crazy, but abso-freakin’-lutely. And as for Beckinsale? "Don’t be in a huge rush," the star says. "There’s a big world out there with a lot of people in it."