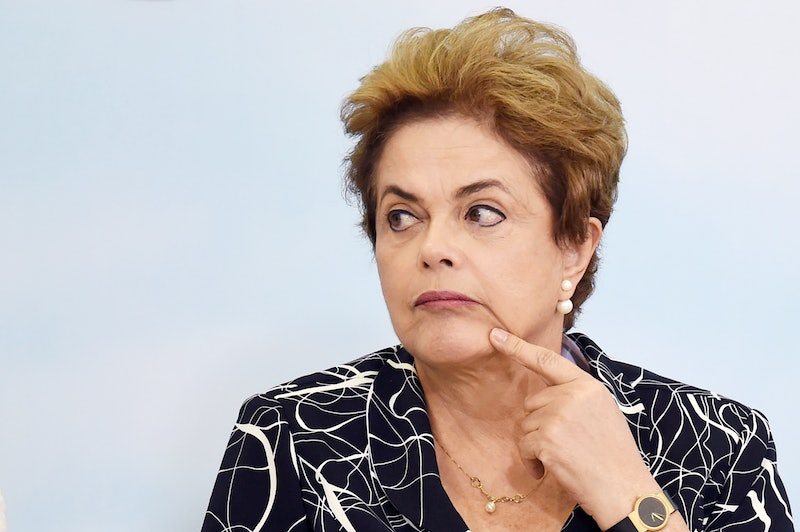 Brazil's new acting president wasted no time taking charge and appointing a new roster of high-ranking state officials after Dilma Rousseff, Brazil's first female president, was suspended from office Thursday following a Senate vote to impeach her. But something seemed off about the Cabinet acting President Michel Temer introduced during his first day on the job: All 21 members of Brazil's new Cabinet are white men.

With zero women and zero people of color, Temer's new Cabinet seems highly symbolic of the challenges that often come along with efforts to make a government more diverse. But it is an especially troubling step backward for Brazil, a country that has long struggled to boost its number of female lawmakers despite legal quotas. Roughly 10 percent of lawmakers are women, according to the Inter-Parliamentary Union.

But as disappointing as Temer's decision to turn his Cabinet into an old boys' club is, it's not wholly surprising as Rousseff's impeachment raised some serious concerns about the prevalence of sexism in the Brazil's male-dominated Congress. Concerns that don't seem entirely off base. In March, for example, a judge released wiretaps that revealed senior officials referring to women, including fellow female politicians, with lewd and sexist language. A month later dozens of congressmen help up signs reading "bye, dear" while voting in the lower house to initiate an impeachment process.

Rousseff and her supporters alleged efforts to impeach her were heavily motivated by sexism. "There has been, mixed in all of this, a large amount of prejudice against women," Reuters reported Rousseff said at a news conference in April. "There are attitudes toward me that there would not be with a male president."

Gender equality concerns aside, Temer's Cabinet also lacks the diversity that makes Brazil one of the most ethnically diverse nations in the world. Census data from 2013 shows 53.7 percent of Brazil's population is non-white, meaning they identify as either black, mixed, Asian, or indigenous, Fortune reported. Comparatively, only 21.9 percent of the country are white males.

Temer's Cabinet is a sharp contrast to the one Rousseff had appointed at the beginning of her second presidential term. Among her 39 members, Rousseff had appointed six women, including one black woman, as ministers, the Washington Post reported. While naming his Cabinet Temer also did a bit of restructuring, slashing 18 members of the Cabinet and cutting Brazil's ministry of women, racial equality, and human rights to roll its function into the ministry of Justice in a supposed effort to cut budget expenses.

Further raising eyebrows were the close ties some of Temer's chosen Cabinet members have to a high-profile corruption case currently unfolding in the country. While vowing to continue to fight corruption, Temer appointed three men to his Cabinet who have been implicated in an investigation into an alleged multi-billion-dollar kickback scheme at the state-run oil company Petrobras.

Brazil's Senate voted Thursday 55-22 to impeach Rousseff on charges of mishandling the federal budget and hiding a growing deficit. They now have 180 days to conduct an impeachment trial and decide if her removal from office will be permanent.