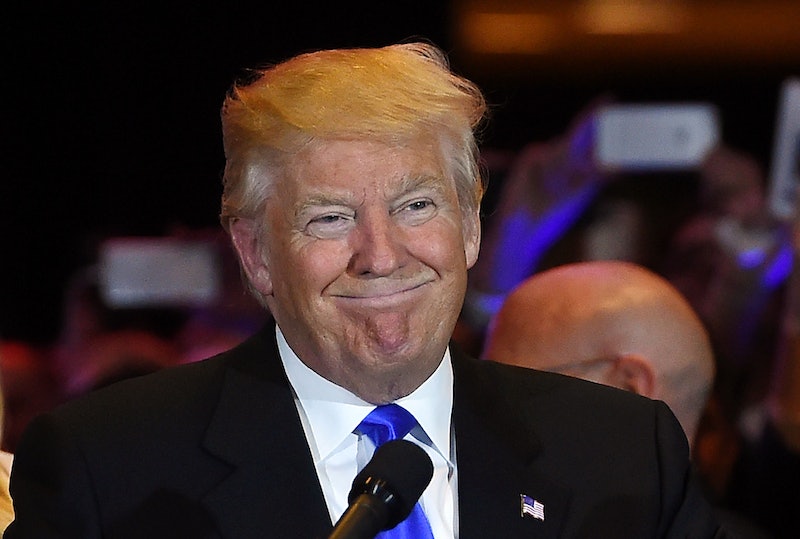 Despite calling women disgusting names and sexualizing everyone from Hillary Clinton to his own daughters, Donald Trump claims to be pro-women. In fact, he has gone so far as to say that women love him and his presidency would be great for the female half of the population. However, his actions don't measure up. Trump's campaign practices and policy plans definitively prove that he isn't fighting for women's rights, so it's incredibly easy to disprove the ways Trump claims to be pro-women (if it wasn't already abundantly clear that he isn't).

The presumptive GOP nominee said in March, "I’m going to be really good for women," adding that the issue is "very important" to him. Trump has also speculated that he'll do way more for women than Clinton ever would; the head of his campaign said Trump is more pro-women than Clinton — you know, the candidate who's an actual woman. Trump has even gone so far as to say Clinton is using the "woman's card" to try to win the presidential election, insinuating that she only appears to be pro-women because of her gender.

So, what is one to make of these claims? In case you needed some convincing (or need to convince your pro-Trump relatives), it's quite easy to realize The Donald is not actually pro-women. Here are four ways Trump has claimed to be good for women disproven by his own actions.

1. He'll Be Good For Women's Health

During a March victory speech following multiple primary wins, Trump said: "I’m going to be good for women’s health issues." However, he proved his own statement wrong by also saying that he would defund Planned Parenthood for offering abortions, despite acknowledging that the organization helps millions of women every year.

Not only is the argument about abortion centered around whether or not women have the right to decide what to do with their bodies, but accessible, legal abortion also saves lives by not forcing women to carry dangerous pregnancies to term. It also allows women to choose when to start a family (giving them the opportunity to start a career first, and thus make money).

2. He'll Protect The Country (For Women)

When Trump claimed he'll do more for women than Clinton, he said that includes protecting the country. While he talks a big game, security experts don't agree with Trump: More than 60 Republican national security leaders denounced his plans and wrote an open letter explaining how Trump would make America less safe. Among their worries were that:

[Trump's] vision of American influence and power in the world is wildly inconsistent and unmoored in principle. He swings from isolationism to military adventurism within the space of one sentence ... his advocacy for aggressively waging trade wars is a recipe for economic disaster in a globally connected world ... his admiration for foreign dictators such as Vladimir Putin is unacceptable for the leader of the world’s greatest democracy.

Does that make you feel safe?

It's also offensive to insinuate that women are weak creatures that need to be protected from the world. Though Trump's claims to protect the nation encompass everyone, the way he speaks about specifically protecting women implies that they need protecting more than men.

Another reason Trump has claimed that he's good for women is that he's hired some before. While that may be true in his business dealings, his political campaign is run entirely by men outside of the communications division — from foreign policy to management and strategy, not a single woman works in the top tier of the Trump campaign. Simply hiring women isn't enough when they all remain in lower-level positions.

4. He Wants To Help Women

Even when Trump tries to explain why he's pro-women, he gives very vague answers that don't actually mean anything. "I cherish women. I want to help women," the billionaire said during CNN's August "State of the Union." It's important to note that he doesn't have a single plan for decreasing the gender wage gap, ensuring women have access to birth control and cancer screenings, or implementing national paid maternity leave. Of all the issues listed on his campaign website, women's issues isn't one of them. He clearly doesn't want to help too badly if he doesn't have a single policy idea on how to improve women's lives besides defunding Planned Parenthood.