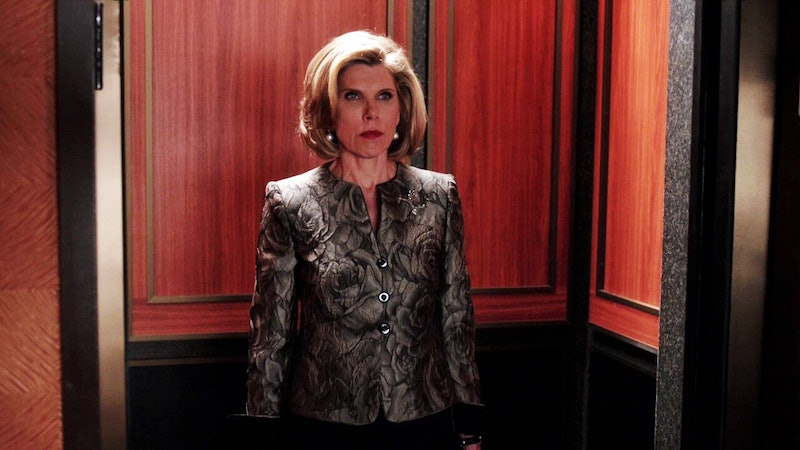 After seven supremely spectacular seasons, The Good Wife's final episode left fans are understandably bereft. However, although the story may well be over for Alicia Florick, there's still hope that we could see more from her frenemy and colleague Diane Lockhart. The Hollywood Reporter is sharing the news that a Good Wife spinoff featuring Diane Lockhart as the lead character is currently being negotiated, and as well as Christine Baranski reprising her role, that Cush Jumbo (who played Lucca Quinn) may also be a main part of the story. And it's hardly a surprise; Diane Lockhart has deserved her own show the whole time.

For anyone who has spent the last seven seasons of The Good Wife watching the show in unbridled awe at the consistently high quality of writing, characters, and acting featured in every episode, the decision to make something more of Diane's character feels long overdue. As gripping as Alicia's troubled story arc was, there were countless moments in the show's history where Baranski's Diane showed that she was worthy of her own show. Whether big or small, these moments prove that Diane's character has more than meets the eye, is fascinatingly complex, and could make for a thrilling TV show.

1. When Diane Fell In Love With A Republican, Gun-Loving Ballistics Expert

Though the relationship between Diane and Kurt McVeigh ended in a particularly bad place in The Good Wife finale, the rest of their relationship was fascinating. To Diane, the romance presented a problem; could a democratic, anti-gun feminist really love a republican, guns rights activist?

Turns out, she could, and, not only that, but the relationship highlighted another one of Diane's powerful character traits which repeatedly came into play throughout the show — that she was able to be diplomatic and rational when it came to her beliefs, willing to put them to one side in order to see a full story.

2. Whenever Diane Was Unafraid To Put Men In Their Place

Diane was strong and powerful and whenever she was having to argue her case against a man. Be it in court, in the office, or in her relationships, she was always able to hold her ground and fight her corner with the sort of cool prowess which made men buckle.

3. When Diane Had A Diplomatic Debate About A Woman's Right To Choose

Diane had a cluster of powerful episodes in which she was forced to re-frame her opinions on a woman's right to choose in a way which was balanced and diplomatic, but none were quite as powerful as the simplicity of the debate which happens between Diane and republican billionaire Reese Dipple (Oliver Platt).

The episode, which is set when Diane joins her husband Kurt on an uncharacteristic hunting weekend, laid out the complexities of the pro-choice, pro-life debate with respect and symmetry, seeing Diane passionately arguing why women deserve abortion rights while still listening to and understanding Dipple's arguments to the contrary.

4. When Diane Fired An Intern For Crying After Will's Death

When Diane returns to the office for the first time following the death of her business partner and closest friend, Will Gardner, she handles her grief with dignity, professionalism, and poise. Once she notices an intern sobbing hysterically in the hallway over a man that she barely even knew, Diane wastes no time in firing the young woman for the action. Harsh? Totally. But also insanely understandable.

I mean, Diane's laugh in itself was a small riot every time it erupted, but her humor in itself throughout The Good Wife deserves applauding, too. Dark, snappy and deadpan, Diane had one liners sharper than her suits.

7. Whenever Diane Had To Fight

Of all the lawyers who have ever appeared in The Good Wife, Diane remains my absolute favorite. Always passionate, always bold, and never ready to give up without giving it everything she had, Diane was a ferocious fighter.

Suffice to say, Diane and Alicia had a roller coaster of a friendship, one which often impacted their business dealings with each other (and vice versa). However, she always gave Alicia a second chance and was able to put personal feelings aside in order to whatever was best for business. I don't know where you stand on all of that, but I think that's mighty impressive.

Ouch. The infamous slap that was heard around the world and which ended the finale of The Good Wife proved that Diane is not one to be toyed with or taken advantage of. Alicia sadly had that one coming, and seeing Diane strut away down the corridor afterwards? Flawless.

Like I said, if and when The Good Wife spinoff becomes officially a thing that Diane Lockhart is leading, then it'll come as no surprise. Here's hoping she's just as ferocious, professional and powerful as she always was (and maybe writing some Vampire Diaries fan fiction? You never know!).

More like this
Everything To Know About Marvel's 'Echo' Series On Disney+
By Grace Wehniainen
Sandra Bullock, Girlboss Extraordinaire
By Matt Harkins & Viviana Olen
Spice Girls’ Net Worth: The Richest Member Is Wealthier Than The Rest Combined
By Hugh McIntyre
Penn Badgley & Leighton Meester Met On A Horror Movie Set Before 'Gossip Girl'
By Jake Viswanath
Get Even More From Bustle — Sign Up For The Newsletter