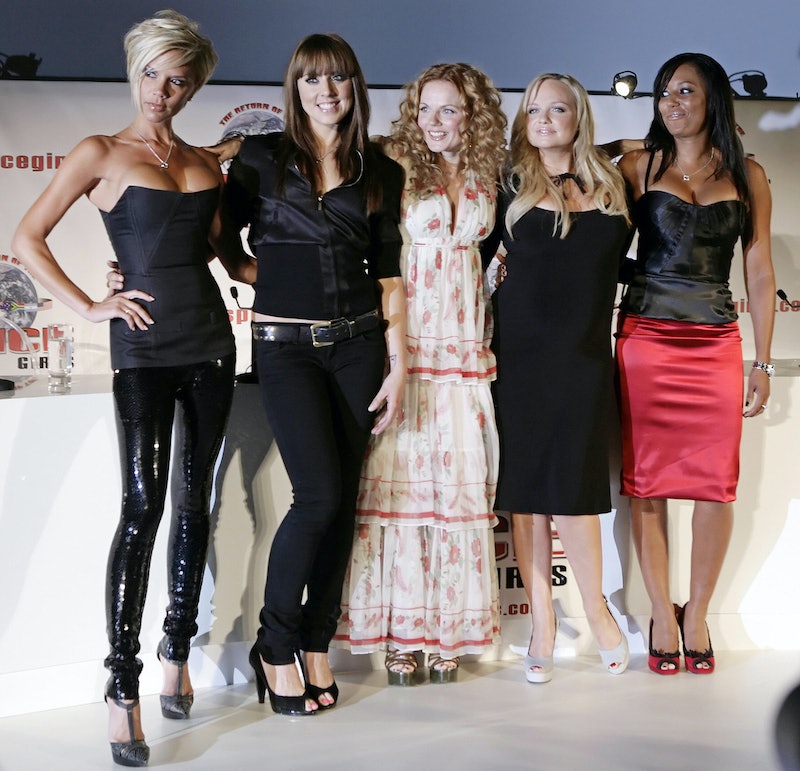 Unless you're, like, 12 years old and can only relate to the Spice Girls if I describe them as "the Fifth Harmony of the '90s," you were probably obsessed with the quintet for the better part of that decade. And when you give the Spices Girls a re-listen nowadays, it's like taking a trip down memory lane. You might've dressed up as one of the gals for Halloween or bought their alter-ego figurines. You might've even gone to their Spiceworld Tour circa 1998, where your friend Rachel cried because she didn't caught a shirt from one of those t-shirt guns they were shooting out into the audience, even though she claimed it was because someone stepped on her foot. Needless to say, when it comes to the Spice Girls, we're all due for a re-listen. A lot's changed since we were those tattoo-choker-and-Lipsmackers-wearing tween girls in the late '90s.

We grew up with these five ladies. We bought their CD's and went to their concerts and dressed up in their likeness for a solid five-year reign of pure girl power and unadulterated pop music. But then they broke up, and Britney and the gang came into our lives, and we got too old to be idolizing girl groups, catchy as they may be. We let the CDs get dusty, and the t-shirts shred. It's been a long time coming, but these are the 11 realizations I had while re-listening to their majesties the Spice Girls for the first time in 15 years.

Take for instance, these lyrics from "Say You'll Be There," "If you, put two and two together you will see what our friendship is for\If you can't work this equation then I guess I'll have to show you the door." Or, of course, "2 Become 1," "Come a little bit closer\Baby, get it on, get it on\'Cause tonight is the night when 2 become 1."

2. They Smartly Used Dance Pop As Jumping Off Point

I'd always thought of the Spice Girls as pure sugar. (Or cinnamon, if you will.) But, in fact, setting their larger-than-life pop star image aside, the group incorporates elements of R&B, rap, and reggae.

3. Not Every Song Was About Girl Power And Making Sure Boys Didn't Get Out Of Line...

"Saturday Night Divas," for instance, uses the phrase, "Get down, get deeper and down," 24 times in four minutes. Never once does it mention any ultimatums along the lines of being someone's lover and/or getting with said someone's friends.

Think of how many hits the Spice Girls dropped about the power of female friendship. Aside from the obvious ones ("Wannabe," Headline"), there are also cute and less direct mentions in songs like "Love Thing" (“God help the mista that comes between me and my sistas!”).

The girls performed "Stop" at the 1998 Brit Awards with "Stop in the Name of Love" hand signs. Aside from girl groups, "The Lady is a Vamp," the last song off that very same album, Spiceworld, name-checks Jackie O and Twiggy.

Although "Too Much" was nominated for a 1998 Golden Raspberry Award for Worst Original Song, it did, in fact, reach number nine on the Billboard Hot 100 upon its debut. And, in fairness, they were up for that Golden Raspberry alongside Aerosmith for "I Don't Want To Miss A Thing," a song I love.

7. They Take On Fake Spanish Accents From Time To Time For No Apparent Reason...

Take this song, "Viva Forever" ("Hasta Manana\always be mine"), which Rolling Stone once deemed "a big ballad that is about as convincing as the Spices' Spanish accents." Or, more to the point, the inexplicable but still pretty epic Spanish rap performed by Ginger in "If You Can't Dance."

8. ...And Sometimes Ginger and Scary Even Rap

That's right: Mel B. and Gerri spit memorable rhymes in "Weekend Love," "Step To Me," "Baby Come Round," "Love Thing," "Last Time Lover," and "Take Me Home." Not a guest artist. All them.

10. One Time Baby Spice Spit Some Rhymes, Too, And It Was Awesome

Emma Bunton's "Bumper to Bumper" rap is the cutest thing ever. Bet you didn't catch that track, but let me assure you: Worth the three minutes.

10. David Beckham 100 Percent Has To Be A Great Dancer

As you'll recall, if you can't dance, you can't do anything for the Spice Girls. Which is my grammatically correct paraphrasing of lyrics from "If You Can't Dance" ("If you can’t dance to this\You can’t do nothing for me, baby").

11. Based On Their First Album, They Could've Just As Easily Gone The R&B Route

That's right: Absolute, the production duo who wrote "Something Kinda Funny" with the group and also co-wrote six of the ten songs off 1996's Spice, worked on a lot of hits R&B-inspired hits. Too bad Destiny's Child swooped in from under them.

More like this
Harry Styles Performed A Snippet Of Taylor Swift’s “22” & The Crowd Went Wild
By Jake Viswanath
Britney Spears Thanks Fans After Miscarriage & Explains Why She's Writing A Book
By Jake Viswanath
'Stranger Things' Star Joe Keery Is Dating An "Indie Scream Queen"
By S. Atkinson and Grace Wehniainen
Kourtney & Travis Crashed His Daughter’s TikTok Live In Their 2nd Wedding Outfits
By Grace Wehniainen
Get Even More From Bustle — Sign Up For The Newsletter