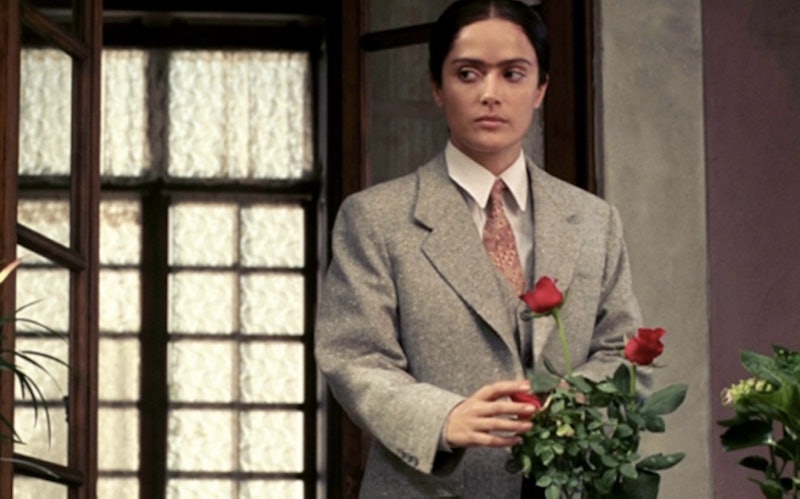 Of course, there's Netflix's Jessica Jones, the Internet's go-to when it comes to feminist superheroes. And she's wonderful. And I've seen every episode. But when we talk about feminist films you can stream from the comfort of your own couch, there are many offerings available for streaming aside from Jessica Jones, from cartoons to films to documentaries. Together as a whole, in recommending these feminist-minded Netflix options, my selections aren't about debating the nitty-gritty of what is or is not feminist. Rather, my criteria for recommending the 17 shows and movies below is simple: the women depicted in them do not exist solely in relation to a man.

These are works that I believe are able to successfully bypass archaic gender stereotypes to instead tell the stories of real women in intriguing and innovative ways. These are works that stand by the portrayal of women as themselves, as opposed to cliché, cookie-cutter characters written as an after thought. Women filmmakers and characters, as we all know, are more culturally significant today than ever thanks to their ability to put women’s issues in the forefront that might not otherwise get their due. Without further ado, here are 17 great film picks every feminist can stream on Netflix right now.

A fabulously put-together 90-something style icon who's also a shrewd and successful business woman? Yes please.

Riot Grrrl legend and Bikini Kill front woman Kathleen Hanna may not have taken a traditional path to musical success, but she did manage to galvanize a group of women activist fans along the way. Plus, you can expect cameos with women like Carrie Brownstein, Joan Jett, Kim Gordon, Jennifer Baumgardner, and Tavi Gevinson.

The award-winning comedy that actress Lake Bell wrote, directed, and starred in calls out gender stereotypes and workplace sexism between hilarious riffs on Kardashian-esque behaviors like vocal fry.

You can't deny that this crime-fighting, stereotype-defying trio are feminist heroines.

The charming story of three women who plot to take down their "sexist, egotistical, lying, hypocritical bigot" boss. Plus, hello? Dolly Parton, Lily Tomlin, and Jane Fonda, what more could you really want in 90 minutes?

This OWN-approved documentary looks at the prejudices faced by dark-skinned women around the globe.

After an unemployed single mom gets a job as a file clerk in a law office, she becomes the center of a massive law suit against a power company accused of polluting a city's water. If that's not a you-go-girl tale, I don't know what is.

The fascinating story of the women who founded the modern women’s movement between 1966 to 1971.

This incredibly eye-opening doc about the underrepresentation of women in power will have you questioning how the mainstream media's undermined your views of yourself and women at large. With appearances by Geena Davis, Rosario Dawson, Katie Couric, Rachel Maddow, Condoleezza Rice, and Gloria Steinem, it's a must-see.

It's the ultimate girl's club: A team of Rosie the Riveter-esque baseball players who dominate in their chosen sport despite widespread skepticism over whether women should be playing sports to begin with, much less holding jobs in male-dominated industries.

Although I'm admittedly squeamish when it comes to body stuff, this documentary is a fascinating exploration of something that's at once so natural and yet so polarizing at the same time.

This Selma Hayek-fronted, Academy Award-winning biopic of the feminist icon portrays the artist in a whole new light. It's amazing to watch the story of any incredible historic figure succeed against the odds, but double if said figure is also a woman and shot so beautifully by Julie Taymor.

The untold story of sexual violence within the U.S. military. Little do most people know, sexual assaults occur at an alarmingly high rate. And the film, thankfully, was able to do some real good. As The New York Times reported, The Invisible War "has been credited with both persuading more women to come forward to report abuse and with forcing the military to deal more openly with the problem."

The story of how Misty Copeland, a woman who has neither the background nor the build of a typical ballerina, became the American Ballet Theatre's first black principal dancer. It's perfect timing to watch the doc, since it was recently reported that Copeland's life story is being turned into a feature film. I wonder who will take the starring role?

Eight actresses battling sexism, ageism, and racism in an industry that prizes youth, beauty, and conformity above most else. It's truly sad to think about, but such a heartfelt and funny work that you need to see it.

Admittedly the grossest movie I've ever seen, but so, so boundary-pushing. As long as you can handle it — or turn your head during the parts that are too much — I say this is a must-see.

More like this
9 Films About Mental Health To Watch On Netflix UK
By L'Oréal Blackett and Sophie McEvoy
What’s New On Netflix: A Victoria Justice Rom-Com & The Return Of David Letterman
By Arya Roshanian
What’s New On Netflix: The Return Of 'Bling Empire' & A Rebel Wilson Comedy
By Arya Roshanian
Sandra Bullock, Girlboss Extraordinaire
By Matt Harkins & Viviana Olen
Get Even More From Bustle — Sign Up For The Newsletter