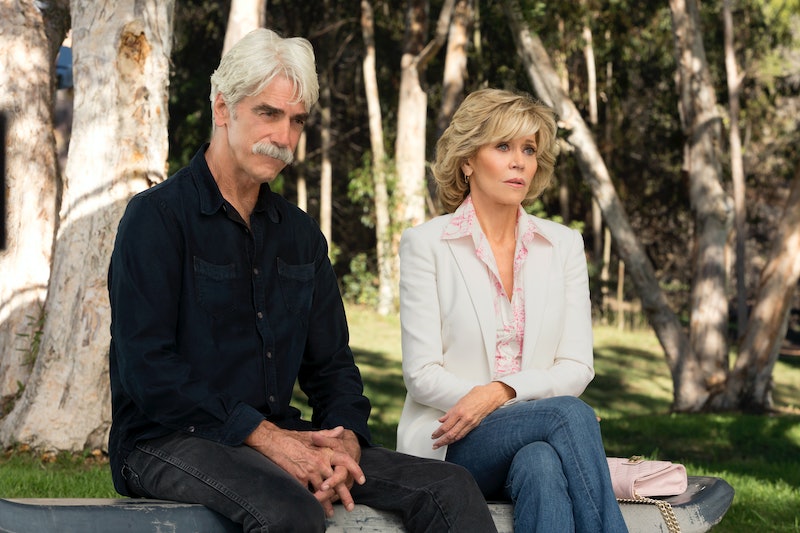 As unfortunate as this fact is, it's still no surprise that, women, especially older women, are underpaid and underrepresented in Hollywood. That's why a show like Grace & Frankie is still so groundbreaking and significant in 2016. Grace & Frankie depicts women in their ‘70s living full lives — having fun, drinking, dealing with grief, creating art, contributing important ideas, and having sex. And, at that, the sex is pretty sexy. But, beyond making viewers hot and bothered, the sex scene in Grace & Frankie Season 2 actually carried a much greater level of significance.

I'll try not to belabor the statistics about sexism in Hollywood (you know, like the fact that women directed only seven percent of Hollywood's top 250 films in 2014, and only made up only 11 percent of writers and 23 percent of producers that same year, according to the Center for the Study of Women in Television and Film at San Diego State University), because it's not just about gender for actresses over 40, it's about age, too.

Hollywood has a real problem when it comes to casting women who are age appropriate for their male counterparts on screen (and let's not forget the time that 32-year-old Olivia Wilde said she was told she was too "old" to play 41-year-old Leo DiCaprio’s wife, she said on Howard Stern). And, Vulture's 2013 article, "Leading Men Age, But Their Love Interests Don’t," depicted the trend of casting younger female love interests with graphs showing how A-listers like Denzel Washington, Harrison Ford, Johnny Depp, Tom Cruise, George Clooney, and more are consistently cast alongside younger supporting actresses.

Hollywood is constantly spreading the harmful message that women lose value with age (see: Amy Schumer's sharp criticism of this trend in "Last F*ckable Day"), whether the industry is setting impossible beauty standards, proliferating casting practices in which men's love interests are routinely half their age, or, most often, not providing roles for older woman at all. According to a Variety report of that same Center for the Study of Women in Television study, the majority of women who appear on screen are in their 20s (23 percent) and 30s (30 percent). Men over 40 accounted for 53 percent of characters, but women over 40 accounted for only 30 percent.

But, many actresses are fighting Hollywood ageism. Meryl Streep has often spoken out about the issue. In a 2011 Vogue interview, Streep said in the year following her 40th birthday she was offered three separate roles as witches in different films. She told Vogue the message felt clear: "Once women passed childbearing age they could only be seen as grotesque on some level."

Sally Field spoke with Bustle about her film Hello, My Name Is Doris and candidly talked about how she doesn't think the tides are changing for actresses, especially older actresses. She noted the lack of roles for older women, saying:

"There just aren’t a lot of leads for almost-70-year-olds ... It’s not like, 'all of these leading roles that have been in film for older women, why didn’t you do any of them?' There haven’t been a whole lot of them."

Geena Davis also recently spoke with Vulture about what she is doing to combat ageism in Hollywood. According to the article, the Geena Davis Institute on Gender in Media has long been analyzing how women are depicted on screen. The Vulture piece explained:

For the last ten years, [Davis] has been at the forefront of gathering data on how women are depicted in TV and film — from the ratio of female-to-male characters in a given program, to the number of minutes they have onscreen, to how children’s programming depicts gender, to the degree to which women are clothed (and unclothed) — and sharing her findings with the only people with power to effect change: Hollywood executives.

In the Vulture interview, Davis noted just how entrenched sexism is in Hollywood, and that even on Sesame Street the male muppets way outnumber the women.

The humans on Sesame Street are diverse, but they had 19 male puppets. It took 25 years before they added their first female puppet, and of course she wears a pink tutu and is covered in jewelry and bows. They also added a purple and pink sparkly fairy. I also remembered watching the movie Finding Nemo, after the mother dies in the first five minutes, they don’t meet any other female creature in the ocean besides Ellen DeGeneres’ character, Dory. In the entire whole ocean, which by its definition is very, very big. *Laughs.* The turtles, sharks — all male. They even meet a school of fish that speaks in unison in all male voices.

The problem with sexism in Hollywood begins behind the camera. The ACLU is currently studying the troubling lack of female directors in Hollywood. So, it's no surprise that a show with Marta Kauffman (of Friends fame) at the helm, is including older women and diverse characters. Marta Kauffman, co-creator and writer of Grace & Frankie is 59 and told The Huffington Post that she's aware of the difficulties for older women in show business. "Even when there are female-led shows, I think they don’t get quite the same respect as shows with male leads get," she told the outlet. She also spoke to the significance of a diverse writers' room, telling HuffPost, “Our age range in our room is from close to 60 to late 20s. We have straight women, gay women, straight men, gay men. It’s a really interesting group of people." And, this group reflects the storylines and dynamic characters that come to life on Grace & Frankie.

Which is why it's no surprise that Grace & Frankie introduced that game-changing sex scene in Episode 10 of the show's second season, "The Loophole." Grace is a single 70-something woman (played by 78-year-old Jane Fonda) who can still find love and act on exciting, new feelings with a 70-something man (played by 71-year-old Sam Elliott). When Grace and Phil (Elliott) arrive at their clandestine hotel room, the couple is sweetly nervous. At any age, there is an innocence to a new encounter and a butterflies in your stomach feeling with budding love. Usually when older characters are in love, it is with a long-time spouse, so it is interesting to see older characters connecting in this way.

While the scene is short in length, maybe a minute or so, it doesn't shy away from romance with candlelight and music that my Netflix closed captioning described as a "slow," "romantic" song. The scene is not particularly graphic, no breasts or genitals are shown and there is no actual thrusting. Instead, the tenderness of the moment is what is so sexy. It also differs from other sex scenes in that the characters have nothing to hide, their skin has aged and their gray hair is out in the open. And unlike shows with older characters, even characters in their 40s, the sex is not alluded to with a clothed, standing kiss as the characters fall into bed. Grace and Phil are groping at each other, and passionately embracing between the sheets.

To boot, the episode is pretty sex-positive in general, as Frankie’s storyline about selling her homemade personal lubricant to Grace’s daughter’s cosmetic business, Say Grace, reaches its climax. Frankie has a liberated attitude when it comes to sex and her organic lube, but her activism and ethics do not mesh with corporate ideals of Say Grace when the company starts mass production on her recipe and adds palm oil (which destroys orangutan habitats) to her cherished product. Frankie makes the decision to distance her vaginal art (which she is very proud of) from the product and remove her name from the recipe and her art from the box. So, here we have two female characters in their '70s who aren't shying away from sex in their personal and professional lives.

Both Grace and Frankie are independent women and they carry on sexual storylines throughout the episode, and the series. This kind of screen time and body image positivity is a step in the right direction for women’s visibility on television and in film. Grace and Frankie are proving that age is just a number and that women in their '70s can have intriguing storylines (duh) just as they can and are having sex. Hopefully more shows will follow suit with a diversity of women in front of and behind the camera to really bring the change Hollywood so desperately needs.

More like this
Love Island’s Latest Winter Season Finally Has A US Release Date
By Grace Wehniainen
Every Season Of 'Love Island' Ranked Best To Worst
By Alice Broster, Frances Stewart and Sophie McEvoy
'That '90s Show' Is Officially Coming Back For Season 2
By Gretchen Smail and Grace Wehniainen
The Plane Crash In 'Dear Edward' Is Based On A 2010 Tragedy
By Grace Wehniainen
Get Even More From Bustle — Sign Up For The Newsletter
From hair trends to relationship advice, our daily newsletter has everything you need to sound like a person who’s on TikTok, even if you aren’t.