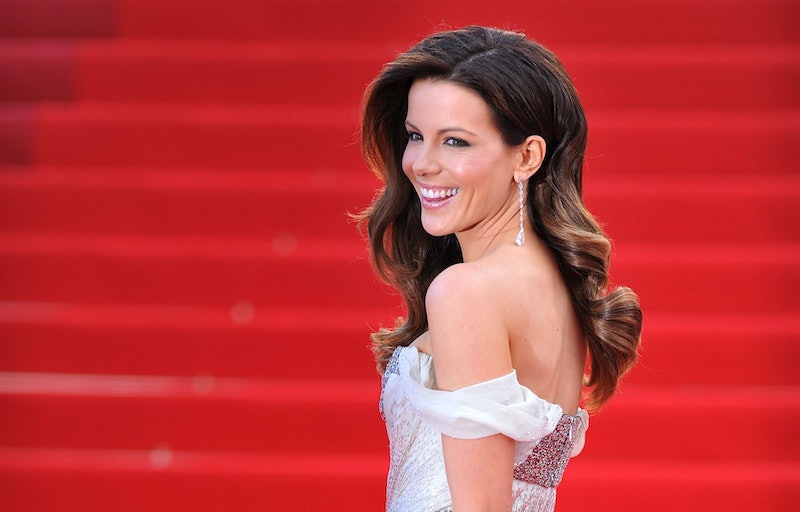 In Love & Friendship, the latest on-screen adaptation of Jane Austen’s work, Kate Beckinsale plays a woman deemed manipulative and extremely ballsy, at least against the sexist backdrop of her 1790s culture. Since the 18th century, women have made significant strides in equal opportunity when it comes to gender, there’s no doubt about that. But after speaking with Beckinsale about the new film, she reflects on her character and makes it clear that society has a ways to go in order to reach true equality. The sexist stereotypes presented in Austen’s tale still exist, and according to Beckinsale, we are still tied to them more strongly than we might realize.

Let’s talk about Beckinsale’s character Lady Susan, who according to Beckinsale is a, “creation within the context of her culture and period of time that she’s in.” Lady Susan is a fascinating woman, because while she realizes she’s limited in opportunity and finds herself dependent on a man and his money, she uses mind games and devious calculation to get herself and her daughter ahead in life. “She’s kind of a superhero, the fact that she’s deciding to have the freedom that was denied to women at that time,” explains Beckinsale. “She believes that’s her right, and there’s something rather pioneering about that that I really admire.”

These days, women run the world in many ways. Still, more of us could benefit from having that calculative gumption in us. “She’s just never, ever apologizing for herself… She’s constantly celebrating herself,” says the 42-year-old actor. “Which, I think is unusual, unfortunately for women.” What is also unfortunate is that a woman who takes life by the balls like Lady Susan could be deemed a “bitch.” Even in the present day.

“Sometimes [being a bitch] means a woman has an opinion or that she’s expressing herself,” Beckinsale explains. But she doesn’t sugarcoat the alternate implication: “There are also incredibly unpleasant women who are nasty to other women.” Even though the sexist term is “so overused these days,” Beckinsale wouldn’t consider her character to be one. “She’s a bit myopic, she’s putting her desire for a freedom that’s not actually allowed in her culture ahead of absolutely everything and anything including her self-awareness,” she says. “She doesn’t think she’s doing anything wrong at all. She certainly doesn’t think of herself as a bitch. She’s not wrong, really.”

Although Beckinsale admits she wouldn’t want someone like Lady Susan in her family, she wouldn’t necessarily mind having her as a friend. “I think if you’re a man, you’ve got to watch out a bit more,” she says. This brings up an interesting point. What makes this character so dynamic is the fact that she’s a woman. If this character were a male, would he be deemed so “naughty” and “shameless”?

“The thing is, I don’t think there’d be any story,” Beckinsale says bluntly. “Not only with her being a male, but if she was transplanted to 2016. If Lady Susan were here today, she would have had a great education because she’s incredibly smart and intelligent, she would’ve gone to a fabulous college, she’d have a great career, she wouldn’t desperately be looking around for a man to marry,” explains Beckinsale. “She’d have her own money. She seems like rather a modern character in terms of what she’s going for, but really, she’s so particularly in her time.”

And if the story were about a man? “It would just be a man who’s happily enjoying his freedom,” Beckinsale states. “I don’t think men really ever historically have been like, ‘Oh my god, I’ve got to get married or I’ll have no value and I’ll end up in the poor house,’” the star says. “It’s never been something that men have struggled with — ‘Dear god, I need a woman and her money to save me’ — You know, culturally, it’s just not happened.”

Fully aware of this culture, Beckinsale commends women who fight it, yet admits she doesn’t know if she fully has the will to do the same. “I absolutely admire any woman who’s pushing the envelope in terms of increasing their freedom and their opportunities and everybody else’s or other women’s,” she says. “At the same time, no, I’m far more self-reflective and insecure, but I think most people are.”

Yes, sexism is still a problem our society, far from what Austen’s pages, reflects. But maybe it wouldn’t be such a bad thing to take a page out of Beckinsale’s book and think about modern sexism realistically, in order to take eventual action that will truly cause the societal shift I, and many others, so strongly crave.