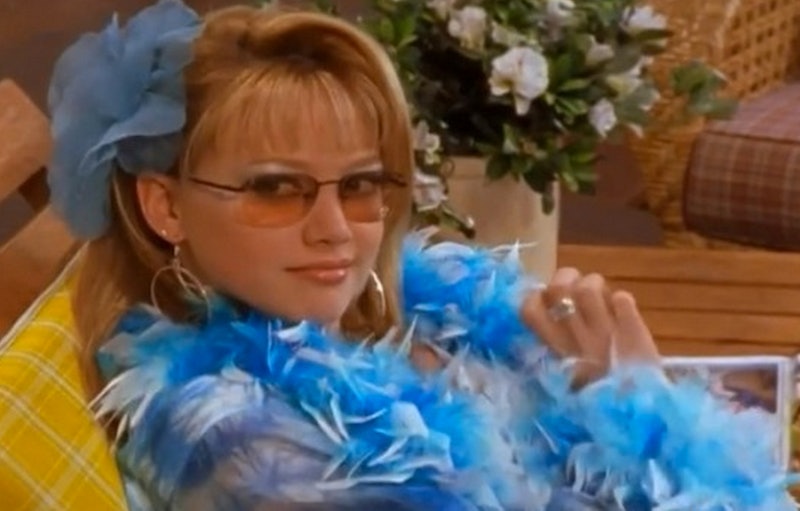 Miss the Limited Too fever dream that was the early '00s? Have I got a solution for you! Now, I can't help you travel back in time, but I can recommend a television program: Look no further than Lizzie McGuire. From 2001 to 2004, the Disney Channel original series gifted its audience with gorgeous early aughts fashion (the printed flared pants! The rhinestone-covered tank tops! The three-bun half-up, half-down confection of a hairdo!), and it also gifted its audience with A+ early aughts pop culture jokes. Over the course of two seasons and a movie, the characters on Lizzie McGuire said some wonderfully ‘00s one-liners. And I've selected some of my favorites.

The Lizzie McGuire quotes below allude to something or someone that entered the zeitgeist in the late ‘90s and early ‘00s. Some have remained in the zeitgeist, some have faded away, all had A Moment around the turn of the millennium, and all were namechecked by Lizzie McGuire.

Ready to revisit some of the '90s/'00s zingers uttered by Lizzie, Miranda, Gordo, Matt, and a few other Lizzie McGuire characters? Crack open a bottled frappuccino, throw some butterfly clips in your hair, and get ready to jump into Lake Nostalgia.

And no, they didn't make Lizzie stand in a spooky corner of a spooky forest shack and stare at a spooky wall.

When Puff Daddy changed his name to P. Diddy in 2001, the world was never the same.

6. “Everyone Knows That You're The Tiger Woods Of Term Papers.” — Miranda, S1E6

Aaaaaand as of 2009, that means something completely different.

9. "I Think The Diamondbacks Are Overrated. A Bunch Of Banjo Hitters & Journeymen." — Gordo, S2E21

Is that a jab at the 2001 World Series champs that I smell?

10. “While Everyone Else Was At The Water Park Trading Beanie Babies…” — Gordo, S1E6

Excuse me, but who would dare bring a Beanie Baby to a water park? What if the tag got wet?! The horror!

FPJ was the heartthrob to end all heartthrobs in the late '90s/early '00s.

This quote showed up to the party with a great late '90s movie and a great early '00s movie? This quote is so fetch (oops, wrong reference).

Ah, I miss the days when picture-in-picture was the pinnacle of TV technology.

Brandi Chastain and that winning goal are forever iconic.

Thanks to his TV show (and that catchphrase), Emeril Lagasse became (and has continued to be) a household name in the late '90s.

18. “That'll Take Her Out Of Cheerleading For A Month, Thanks To Sabrina The Teenage Witch.”— Gordo, S2E4

Remember when a phone plan that didn't charge extra for long-distance calls seemed like the greatest thing to ever happen to cellular devices? Were we ever so young?

...Seriously though, what kind of monster takes a Beanie Baby to a water park?!?!

More like this
Hilary Duff Spills The Tea On Why Disney+ Canceled The 'Lizzie McGuire' Reboot
By Jake Viswanath
The Most Extra Party Girl Beauty Looks From The Early 2000s
By Paris Giles
All The Early 2000s Hairstyles Rihanna Wore In A$AP Rocky's "D.M.B." Video
By Olivia Rose Ferreiro
Amanda Seyfried Reflects On 'Mean Girls' & "Gross" Remarks That Men Made After It
By Jake Viswanath
Get Even More From Bustle — Sign Up For The Newsletter