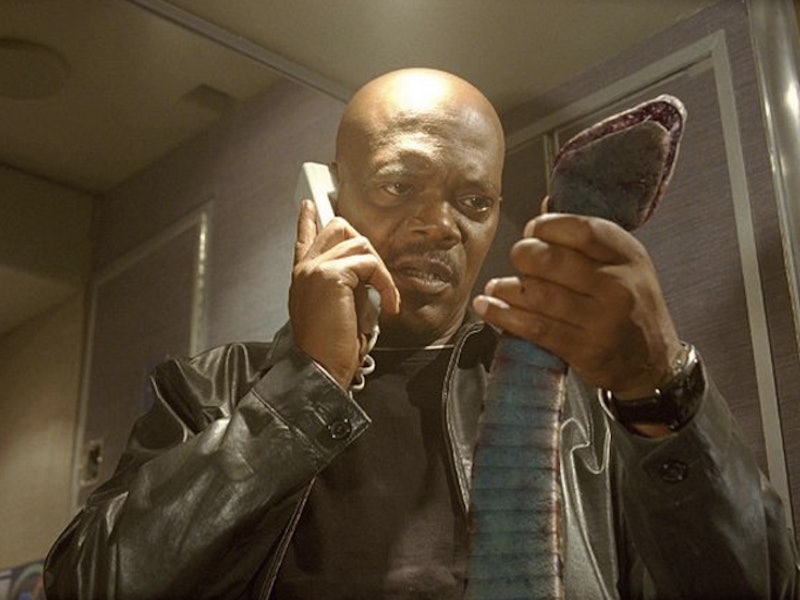 It is a truth commonly acknowledged that a single woman in possession of a laptop must be in want of a so-bad-it's-good movie to laze away her hungover Sunday on. Ladies (and gentlemen, because why discriminate? I know you want to get stuck in on the bad/good film action, too), you're welcome. You're so welcome. All of these movies showcase the best of the bad movies the '80s, '90s and '00s had to offer, and they're perfect for a mass daytime sleepover. So get on the blower, invite some buddies over, order pizza and get ready to zonk out as your brain gets a holiday and your eyes get a massage from all the crazy special FX in these old movies that are so bad they're good.

After a bunch of exotic spiders in Arizona are accidentally exposed to toxic waste, the predictable next step happens. Nope, they don't turn into Spider-Man. Instead, they become enormous and start feeding on humans. Even less feasible than the plot of the movie, did you know actually-good-actors like Scarlett Johansson and David Arquette are in this extremely?

I don't feel like I've got to sell this one to you guys. It's all in the title. But fun extra info: the production crew couldn't afford to shoot it in Venice, so they shot it in Bulgaria instead. Plus, it stars the stellar acting talents of a couple of famous people's siblings: think Scarlett Johansson's sister Vanessa and Alex Baldwin's brother Stephen.

If you haven't seen it already, cancel your plans for the evening. The character development in this wannabe sleaze flick is beautifully arbitrary, with protagonist Nomi performing a lap dance for $500 like it ain't no thing, but getting upset when a guy asks her to rub ice on her nipples to make them look hard, because that makes her feel cheap. Also that weird Kyle McLachlan/Elizabeth Berkley mutual face-eating session in the swimming pool: yesssssss/nooooo.

When you think "indie movie," you're usually expecting subtle, nuanced dialogue and slow burn character development. Not here. This melodramatic indie centers on a troubled love triangle between banker Johnny, his fiancee Lisa, and his best friend Mark. One film professor described it to Entertainment Weekly as the "Citizen Kane of bad movies."

Elevating xenophobia against French people into a storyline the filmmakers expect we can all get behind: French girls are just too hot, and they have to be stopped, OK?

How can a film with George Clooney in the lead role and Uma Thurman in be so bad? Arnold Schwarzenegger's puns. Overuse of smoke machines. Some seriously clunky dialogue. Worth seeing for any of those alone.

Forget his work with Tarantino: this is the definitive Samuel L. Jackson movie, period.

Josh Hartnett plays a guy who, after a brutal breakup, resolves to not have sex during Lent. So, obviously, this is the moment he meets the girl of his dreams and, for whatever reason, can't just tell her why he keeps recoiling as if she has leprosy when she leans in for a kiss. So many highlights here, guys. That scene where he brings Dream Girl to orgasm with, what was it, a feather? A flower? And then the amazing 3D special effects when he hallucinates a landscape made up of breasts. Too much genius for one movie.

Terrible one-liners, Will Smith dressed as a cowboy, and an enormous mechanical spider. What more do you need to convince you to watch?

Jennifer Lopez and Ice Cube star in this movie about a documentary film crew who have to fight a snake that, to quote Rotten Tomatoes, "squeezes its prey to death, eats it whole, regurgitates it and then eats it again." Mmmm. Maybe not one to watch while snacking.

It's a vast cinematic universe out there, and sometimes you don't want to watch The Bicycle Thief or that daring new indie film from Norway. You want B-List celebs, explosions and smoke machines — in other words, junk food for your eyes. This list is a great start for your cinematic cheat days, and these movies are ones you're not going to be able to get enough of once you tune into this magic.

More like this
Why The '365 Days' Sex Scenes Are Good, Even If The Movies Aren’t
By Arya Roshanian
What’s New On Netflix: A Victoria Justice Rom-Com & The Return Of David Letterman
By Arya Roshanian
Lisa Marie Presley Reviewed Baz Luhrmann’s ‘Elvis’ Movie On Twitter
By Grace Wehniainen
You Can Thank 'Spider-Man' For The Meme-ification Of Movies
By Dana Schwartz
Get Even More From Bustle — Sign Up For The Newsletter