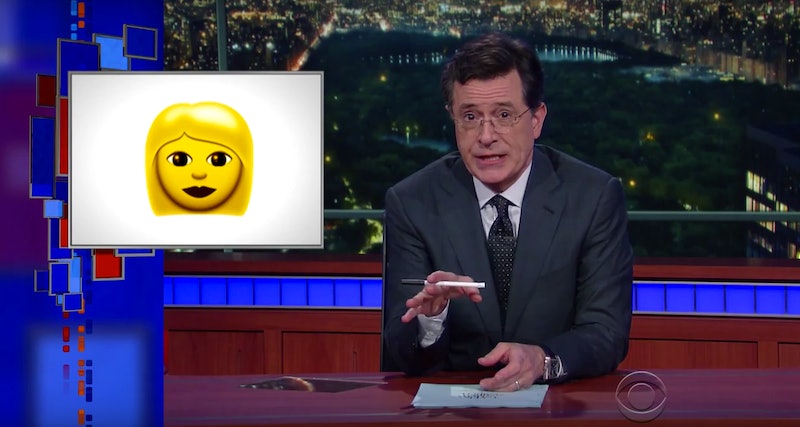 Stephen Colbert is not just man of my heart, but a purveyor of emoji equality. On Colbert's recent episode of The Late Show, the host tackled the lack of emoji representation for women on your keyboard. It's a world that's slowly and steadily become a crucial part of our communication habits, whether we like to admit it or not, and so equality among those tiny pictures is important. Colbert honed in on this topic following recent news that a group of people at Google are working on creating more diverse and gender-inclusive emojis. Because, as Colbert puts it, the landscape is "a bit of an eggplant fest" right now. Hear, hear!

Colbert began his segment with some hard-hitting truths. “Everyone likes emojis but not everyone is properly represented in emojis. For instance, women are not well represented in the emoji world.” Unless you count Flamenco dancer, princess, and bride as fair representation. (Spoiler alert: You probably shouldn't, it's pretty darn limiting.) In the world of emojis, men can be anything. As Colbert points out specifically: "Police officer, a British palace guard, a Santa with a weird flesh beard, a private investigator, a bike helmet sales person, etc." As for the ladies? Not so many options. We've got haircuts, and head massages, and um...nails?

But Colbert, wait! Before this new, more diverse set of Google emojis hopefully comes out, there are other apps available now that can represent the thoughts, feelings, and actions of us ladies. Find some of them below, but first check out the host's hilarious commentary.

Regardless of whether or not that ghost happens to identify as a woman, here are some apps you can download to better represent your broader range of interests. Girl power!

Kimoji might not be everyone's cup of tea. You won't necessarily find a female lawyer emoji in the app, but hey, there's still a lot more women-centric options.

Just like its creator Amber Rose, Muvamoji is not afraid to wear its feminism proudly. In the lineup, there's all sorts of sex positive options, but my favorite is probably the one of Amber Rose gettin' paper.

Imojis are more like stickers than your typical emoji, but they let you pick from all sorts of non gender exclusive emotions, and have a pretty impressive collection of female faces. Plus, you can even turn your own selfies into stickers. Winning!

The "NSFW" Flirtmoji wants you to — according to their website — "Have better sext." Which is dope on all accounts. The app includes everything from anatomically accurate illustrations, to suggestive ones, to tongue-in-cheek copulating bunnies. A welcome and necessary addition to the emoji-verse.

At the end of the day, a world where we see more woman represented across all facets of life — even yes, our digital communications — is one I want to be a part of.

More like this
Remember These Ancient Pieces Of '90s Tech?
By Lucia Peters and Emma Carey
Using Your Pet’s Name As A Password? Here’s Why You Might Want To Change It
By Cristina Sanza
What Is “Night Luxe?” Breaking Down TikTok’s New Aesthetic
By Courtney Young
TikTok Is Using A ‘Love Island’ Sound To Expose Their Weird Crushes
By Courtney Young
Get Even More From Bustle — Sign Up For The Newsletter