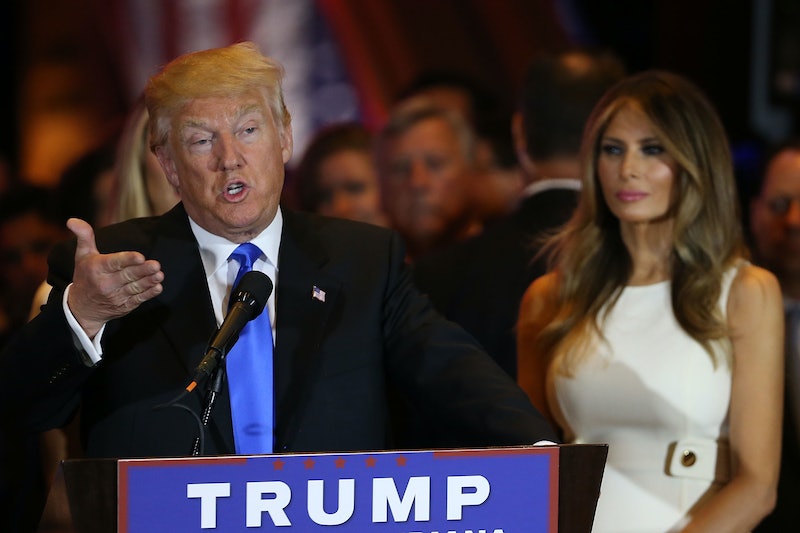 Donald Trump has gone on record calling women fat, ugly, pigs, and disgusting. During one season of his reality show The Apprentice, he suggested a female contestant would look better "on her knees." He has recently accused Democratic presidential candidate Hillary Clinton of playing the "woman card" and, in 2015, publicly attacked Fox News host Megyn Kelly for having "blood coming out of her wherever." But a new report from The New York Times reveals alleged sexist remarks Trump has made throughout the decades, as well as incidents that show how the billionaire business mogul truly values women — that is, if the quotes are true, not much at all.

“I have always treated women with great respect," Trump told The New York Times in an interview for the article. "And women will tell you that.” However, the dozens of women interviewed for The New York Times report share a different view. In all, the paper conducted 50 interviews for this startling long-form report. Former girlfriends and Miss Universe and Miss USA contestants (Trump is a former owner of the Miss Universe Organization) were among the women interviewed. Bustle has reached out to the Trump camp, but has received to response to the allegations.

Some of these stories appear to involve sexual harassment and unwanted touching. In one account, former Miss Utah Temple Taggart alleged that she received an non-consenual kiss on the lips from Trump after he introduced himself, The New York Times reported. Taggart told the news source:

I thought, “Oh my God, gross.” He was married to Marla Maples at the time. I think there were a few other girls that he kissed on the mouth. I was like “Wow, that’s inappropriate.”

Taggart claimed that his unwanted kisses happened more than once. Trump disputed her story to The New York Times.

These recent claims from former pageant contestants, however, are not without precedent. It's already well-documented that Trump liked to get intimate with his Miss Universe contestants, and was way more involved with the pageants than what would be appropriate. Former Miss California Carrie Prejean's memoir described that Trump would make all the women line up in front of him in opening number outfits that she said were more revealing than their bikinis. He allegedly openly judged and ranked them. (An excerpt from Prejean's memoir is included in The New York Times story.)

And according to former Miss Universe winner Alicia Machado, Trump allegedly forced her to lose weight after she gained some following her 1996 title win. Machado told The New York Times that Trump publicly shamed her for gaining weight in front of media outlets, and the experience left her battling eating disorders for years.

Many of Trump's former colleagues also went on record for this report, detailing how Trump would openly chide them for gaining weight or make sexist comments about other women's bodies in a workplace environment. Barbara A. Res, a former executive at Trump's real estate company, said her boss would constantly make demeaning remarks to her and other women despite their high-ranking roles in his company. But above all, Trump was always obsessed with the image of his company — specifically, the beauty of the women who ran it and the women he was with.

We had a big meeting once. I grabbed one of the women in the office and sent her in to get lunch orders. Donald said, “Not her.” She didn’t look great. He got another woman to take the lunch orders. That was purely about looks. He wanted the people in that room to think that all the women who worked for him were beautiful.

"At Trump Tower,” Res added, "he called me Honey Bunch." Others who have worked with Trump told the news outlet that he would call high-ranking women, including Alair A. Townsend, who worked in the Koch administration, "hon" and "dear."

But the worst allegations in this astonishing report is something that's already been in front of the public: how gross Trump was with the women in his family, particularly his daughter Ivanka and his ex-wife, Ivana Trump. It's clear that Trump values their attractiveness — even that of his own daughter — over their accomplishments, with Trump once writing that his biggest mistake was taking Ivana "out of the role of wife" and placing her in charge of the Trump Casino in Atlantic City.

Yes, Trump, that was indeed your biggest mistake.