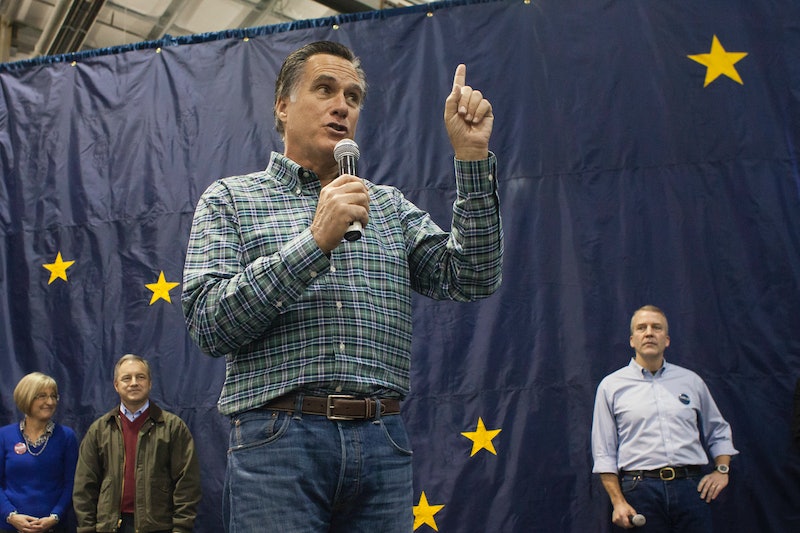 With the possibility of a President Donald Trump looming ominously over the Republican party, one familiar face has reemerged in an apparent attempt to save the future of the GOP. Mitt Romney. But what has Romney done since 2012? It seems he has been particularly busy this year because of The Donald, despite being largely MIA since he lost the presidential election four years ago. Since March, he has been speaking out against Trump. There have even been talks that Romney is behind the third-party plan to pit another candidate against Trump in the general election.

In the immediate aftermath of the 2012 election, Romney was photographed doing a lot of really normal things — fun stuff that definitely would not be accessible to a president-elect. His month after the election was packed: He led a family trip to Disneyland, got a McFlurry at McDonald's, and saw Breaking Dawn with his wife in theaters. (Romney has admitted to being a big fan of the Twilight series because of his granddaughter.)

Romney avoided any interviews or public appearances until December 2012, when he and his wife sat ringside for the big fight between Juan Manuel Marquez and Manny Pacquiao in Las Vegas. He finally broke his silence a few months later, when he sat down with Fox News to speak about the adjustment in going from the high-intensity campaign trail back to normal life. "We were on a roller coaster, exciting and thrilling, ups and downs," Romney told Chris Wallace in February 2013. "But the ride ends. And then you get off. And it's not like, 'Oh, can't we be on a roller coaster the rest of our life?' It's like, 'No, the ride's over.'"

But it seemed the ride wasn't quite over for Romney yet, as his political involvement would slowly renew over the following years. While Romney's primary focus was on business — helping his son's investment banking company as chairman of the executive committee and serving on the board of directors of Marriott International — he maintained his connection to the Republican party. He spoke at the 2013 Conservative Political Action Conference (albeit receiving only a lukewarm reaction from the crowd) and helped campaign for Republicans in the 2014 midterm elections.

Now, in an attempt to give his party an alternative to Trump (whom Romney called "a phony, a fraud"), the former Massachusetts governor is getting back into the fray in earnest. He is reportedly part of a team attempting to run a third-party candidate in the general election and undercut Trump's support — a cause which may keep him in the political spotlight through November.

Romney may never have the political career he once aspired to, it seems he gets to keep contributing his vision for the party regardless. Although he hasn't had much exposure to the political world since he lost in 2012, his involvement in this campaign should have an interesting effect on the GOP. Because of the divisiveness that Trump has brought to the party, Romney has the chance to once again make waves, and these waves could impact the party for years to come.