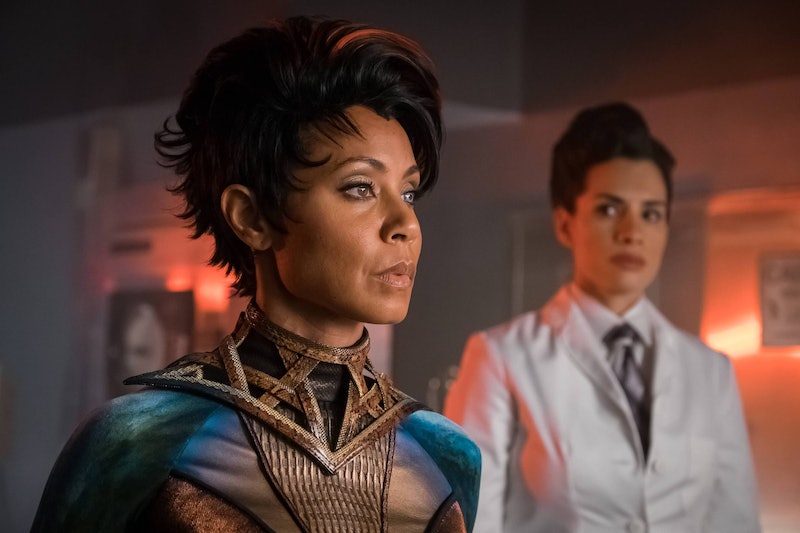 Just in time for the second season's dramatic conclusion, Fish Mooney is returning to Gotham in Monday night's penultimate episode. But even though she still looks the same, how will Fish Mooney be changed by Hugo Strange's resurrection? When Theo Galavan was brought back, he had a totally different personality and identity. His mind couldn't handle the death and return, so Strange had to craft the identity of Azrael in order to push Galavan into doing his bidding. But in the trailer for Mooney's first reappearance, below, she immediately rejects Strange when he tries to do the same for her. He attempts to give her an alternate name and alias, probably because he assumed she'd have the same brain-melting crisis as Azrael.

So, could that mean Fish Mooney is going to be completely outside of Strange's control? If she retained her memories, then she should remember that Indian Hill was a place infamous among the criminal underworld and want to get the hell out of there as soon as possible. However, she was responsible for the death of Dr. Dulmacher, who was basically Season 1's Dr. Strange, so maybe she'll be the one who's responsible for bringing him down.

When Galavan returned as Azrael, he also went from a normal man to a super-strong brute with the power to withstand bullets (with the help of the armor Strange built for him). So could Fish also be a lot stronger than when she died? According to the trailer, Strange is accelerating his resurrection process, so perhaps Fish won't have any superpowers. Since she's an original character, there's no DC Comics background to look to, and she's already one of Gotham's smartest and shrewdest characters, so she certainly won't need superpowers.

I think the person who needs to worry most about Fish Mooney's return is probably her murderer, Oswald Cobblepot. No matter what is going on with Fish's abilities, her memories, and whether or not she's in Strange's control, the Penguin should be very, very worried about possible retaliation.

The last time she was done wrong, Fish managed to escape a secret jail where people's body parts were harvested, fly a helicopter while bleeding from a gunshot wound, scare away one mob boss and kill another, and very nearly recapture control of the entire organized crime world. So, when she returns, I think the first thing she'll do is be out for some revenge — regardless of how much she's changed from Strange's experimentation.