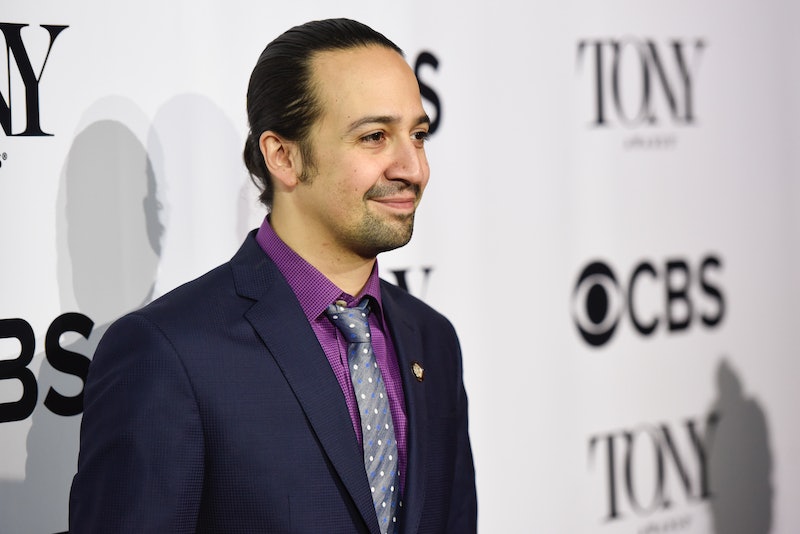 Unless your cultural consumption consists exclusively of hours-long stretches of The Bachelorette and a constant loop of each music video from Taylor Swift's 1989, you most likely know all about Hamilton by now. You know, the show? The breakout musical about Alexander Hamilton? The one up for 16 Tony Awards? That's written and composed by its star, Lin-Manuel Miranda? The guy who freestyles for Obama, won a MacArthur "Genius" Grant, and earned a Pulitzer Prize? Yeah, you know the one. Miranda is back in the headlines for a video he posted in celebration of the 20th anniversary of Rent , and fans of both that show and Hamilton are gonna want to see it. To honor Rent's legacy, Miranda got together with the 1996 musical's original guitarist, Kenny Brescia, and star, Adam Pascal, for a very memorable rendition of "What You Own."

Miranda's video isn't just a one-off shot to commemorate another iconic musical, though. In fact, the video is part of a series seeking to bring the work to a larger audience via Hamilton's $10 #Ham4Ham ticket lottery, wherein Miranda gives live sidewalk performances under the theater's marquee before the actual show. #Ham4Ham performances, the majority of which occur with so little warning that the audience has no idea whether Miranda will start a rap battle or bring in the New York City Ballet, have also branched out to digital specials, wherein Miranda passes the baton to late-night talkshow hosts and Broadway stars alike. Here's a definitive guide to the best #Ham4Ham performances yet.

Yes to all things Fallon impression-related.

This seems like it required either more planning than a hundred-piece flash mob, or 30 seconds of Miranda being like, "Yeah, I guess we could just have you perform in the open. Why not?"

To Star Wars fans the world over, Miranda does not disappoint.

The coffee talk is arguably my favorite part.

A Les Mis/Kyle Jean-Baptiste/Hamilton/Lin-Manuel Miranda mashup on the sidewalk? What could be better?

If really niche Salonga cameos are your thing, also check out the singer's appearance in an Olsen twin music video.

Check out 1:50, when Miranda, still backstage, starts pantomiming being shot as the Les Mis stars come out in their period costumes. Epic.

Yes to that accordion beat!

...Via the auditorium in Miranda's elementary school. Adorable.

Lena Hall is so perfect in everything. The only way this could be better is if she adapts Nicola from Kinky Boots to an encore performance.

An ideal political-cultural placement if I've ever seen one.

Schumer's verses are so catchy that I've said the phrase, "I am NOT throwing away my... MOP" (at least that's what I think she's saying?) possibly 12 times today, and have no intentions of stopping.