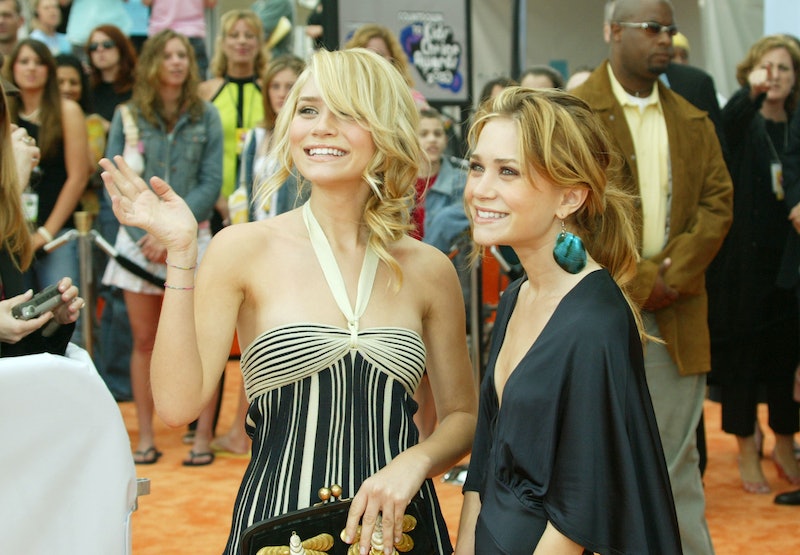 It's a common misconception that the Olsen twins were the only stars of their straight-to-VHS-and-DVD films. In fact, I poured over IMDb for hours in search of the most famous actors who have appeared in Olsen movies to disprove just that. While the twins, of course, took headlining roles in all of their Mary-Kate & Ashley films, the actors who carried the films along with them were usually playing a cute-but-somehow-unavailable love interest, a quirky parent(s), a best friend, or some combination thereof. Watching the Olsen twins on their own would be like reshooting every season of Keeping Up with the Kardashians with just Kim: You need the whole family for that to work, just like you need a whole cast to make any movie work.

As a result of this, Dualstar the twins' (in my own estimation) bajillion dollar entertainment company, was incredibly strategic about hiring actors who enhanced the Olsen twins' particular brand of cuteness, with quirky character actors. Although, admittedly, just a handful of the several hundred actors who have appeared in Olsen works over the years have gone on to astounding success, they nonetheless have each managed to outnumber the Olsen twins' acting credits by a long shot. (No one, however, has managed to out-fashion them.)

Need more proof? In chronological order, here are all 33 famous actors who have appeared in Olsen works.

Danny DeVito, sadly, does not appear in the film. Of course, Rhea is always a gem.

One Cloris is never enough, so we get two in this movie.

A pre-Will Truman Eric McCormack in a corduroy blazer presiding over a pair of Olsens on a search for the family moonstone? Who knew the world could be so kind?

Oh God, Joey with long hair is everything I never knew I wanted. Except a reboot of Brotherly Love. But that I know I want.

Ashley: Did you get that, Mary-Kate?

In addition to playing the role of Girl in Car, she also appeared as herself in several other Dualstar masterpieces. Of course, she wouldn't break out on her own until she became an adult.

Remember Fi Phillips from So Weird ?!

Yes to everything about Kirstie as an Olsen matriarch.

The only way this could get better is if John Stamos was the weird rocker uncle.

Best "blouse" ever, Clarice Kensington/Mrs. Ross Geller. (Coming from someone who never uses that word.) (Hope you can appreciate that dual Friends/Juno reference.)

Blonde girl with the bangs dancing around in the back of the Olsen's living room? There she is!

If you're looking at the clip above, wait until you find Sara, then shift your gaze to her left. Young Christel Khalil is mostly blocked by an Olsen twin, but she remains in the middle back. Don't feel badly, though: Her soap opera star days would soon move her to the front.

You're Invited to Mary-Kate and Ashley's Mall Party (1997)

Since starring in The Chosen opposite internet star Kian Lawley, the child star/recording artist has started to carve a niche for herself, but somehow seeing people in '90s headbands is usually more appealing to me than anything else.

In addition to playing the role of Chelsea Myers in what some call the Olsen's best film, Caplan was also Clueless' Ms. Geist, as you'll recall from this perfect moment. Did you know in addition to being an associate producer on the 1995 classic she was the co-executive producer of the Clueless tv series? Now you do.

In addition to playing a driving instructor in this 1998 film and later breaking into the mainstream as Butch Ada in Saving Grace , Chase is also set to appear in the Twin Peaks reboot!

In addition his appearance as Taylor, did you know Michael Cera was the voice of Brother on The Berenstain Bears ?

After becoming SJP/Carrie Bradshaw's BFF Stanford Blatch, Garson appeared as Agent Norm in what I consider the best Olsen work of all time. Feel free to disagree with me, but the opening scenes where they continually blow their Witness Protection cover elevates the tween cinema genre.

The "Actor You've Seen Somewhere Before" is finally, finally breaking out on his own after decades of minor appearances.

Sheriff Liz from The Vampire Diaries ? Is that really you? It is!

Although his minor role in the film as Thug #1 (Pants on the Ground), which is the best name for a minor role ever, is similar to most his other work (the actor is known for playing brutish characters), he's probably best known for playing Azamat Bagatov in 2006's Borat. (You'll remember it; see the above clip.)

Once a heartthrob, always a heartthrob? Usually not the case, but definitely true for Spencer as Chicago Fire's Matthew Casey.

You're telling me Patrick from the sadly short-lived 10 Things I Hate About You series is actually an Olsen love interest? Oh, wait. That makes perfect sense.

Amazing appearances by both a very young Fox and your favorite early '00s band, Play.

Before he was Julian Baker on One Tree Hill , he was just another Olsen love interest.

Juice from Sons of Anarchy wasn't always so badass. Check him out as Anthony.

Wouldn't anyone rather hunt down an Olsen for truancy in this movie than answer Jason Biggs' sex questions?

Talk about a meet-cute, tiny Marcus from Nashville .

A sneaky Gilmore Girls reference would do this GIF justice, but there are no words coming out of my mouth. Dean's changed!

This is all well and good, but what would Justin the manager think of Jack the reality star?

Check out Dr. Drew's acting chops at the end of this epic hooper reel.

Granted, some of the aforementioned famous actors were famous before their appearances, but even so, it's still up for debate as to who's the ultimate Dualstar breakout star of them all.