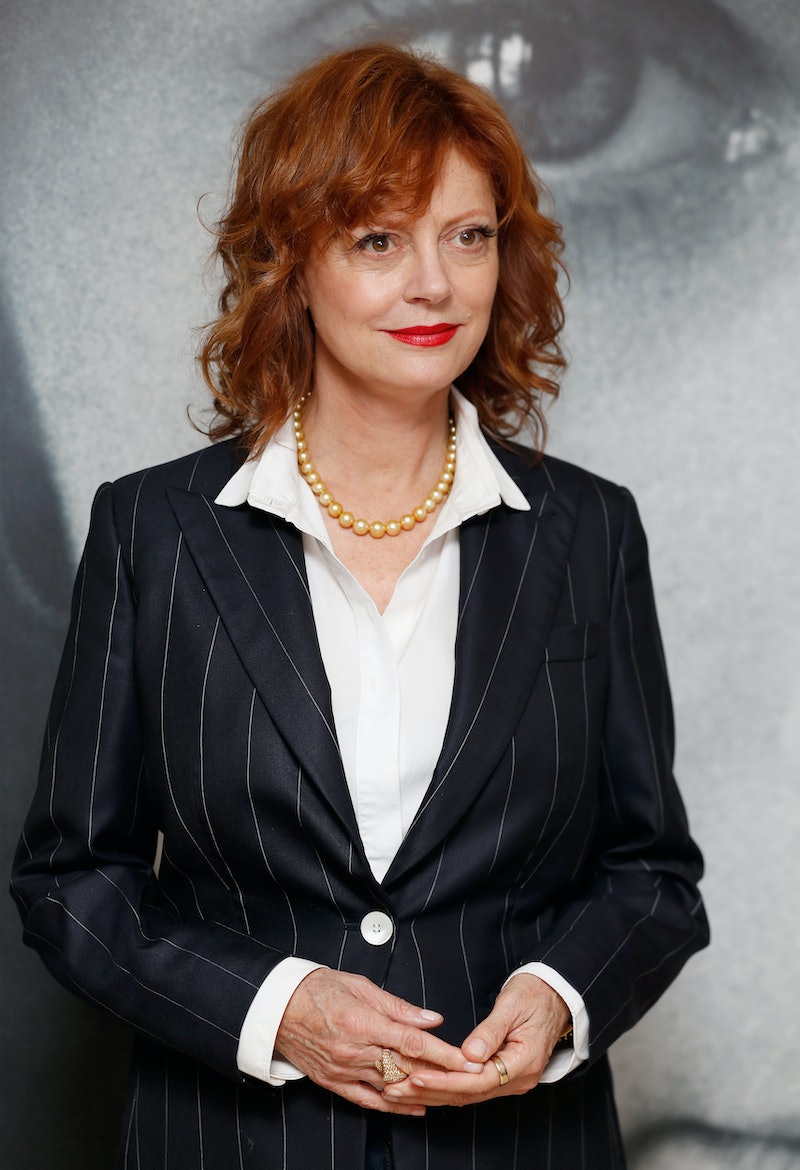 There has been a lot of talk around the Cannes Film Festival this year, but it hasn't just been about the spectacular movies or show-stopping fashion. In 2015, the Cannes flat shoe ban was put into place for women, and Susan Sarandon's response to the Cannes dress code this year was nothing short of amazing: The woman went rogue.

Both written and unwritten dress codes seem to box women into stereotypical and "traditional" female styles of high heels and evening gowns, but Sarandon spent the weekend of May 14 walking up and down the Cannes red carpet in flats, sunglasses, suits, and tux-inspired dresses.

As Catch News reported, her first outfit meant walking up the red carpet in a sleek black suit, a sheer white blouse, and pointy flats that were just as chic as any heels I've ever seen. And to tie the whole look together? A pair of cool sunnies, of course. Catch News added, "In another subtle eff you, she also donned a pair of sunglasses the entire time she was on the red carpet."

Apparently, this isn't the first time the actor has made a stand against so-called rules regarding what women should wear. Catch News reported, "Wearing flat shoes to events where all the other actresses totter around in high-heels is nothing new for Sarandon, who's [at] Cannes to receive a Women In Motion Award. Back in 2009, she even went barefoot [to] a red carpet event in New Zealand."

For her second outfit of the festival, the 69-year-old babe wore a dress that looked like a deconstructed tux with ample cleavage and leg on display. The Sun described the outfit perfectly, noting, "Keeping things chic, the brunette opted for the tight-fitting full length dress-suit yet made sure it had a splash of sexiness with its deep V-cut neckline and a huge split up the thigh."

But the best part, IMO, was what she decided to accessorize with. Sarandon accented the whole show-stopping ensemble with a pair of quirky orange shades. According to Catch News, she "completed her look with gold accessories and a pair of large orange sunglasses."

Why are Sarandon's dress choices important, you might be asking? While stepping out in flats, sunglasses, and menswear might seem like small rebellions, she's highlighting the fact that we're past the age during which we can tell women how to dress. There isn't one type of woman in this world; therefore there isn't just one type of style we can pigeon-hole each other into. If you want to wear a tux, you're just as femme as the woman strutting down in a ball gown. And if you want to wear flats, you can look just as appropriate as the human in five-inch stilettos.

So thank you Sarandon, and all the other women who break those dress codes.