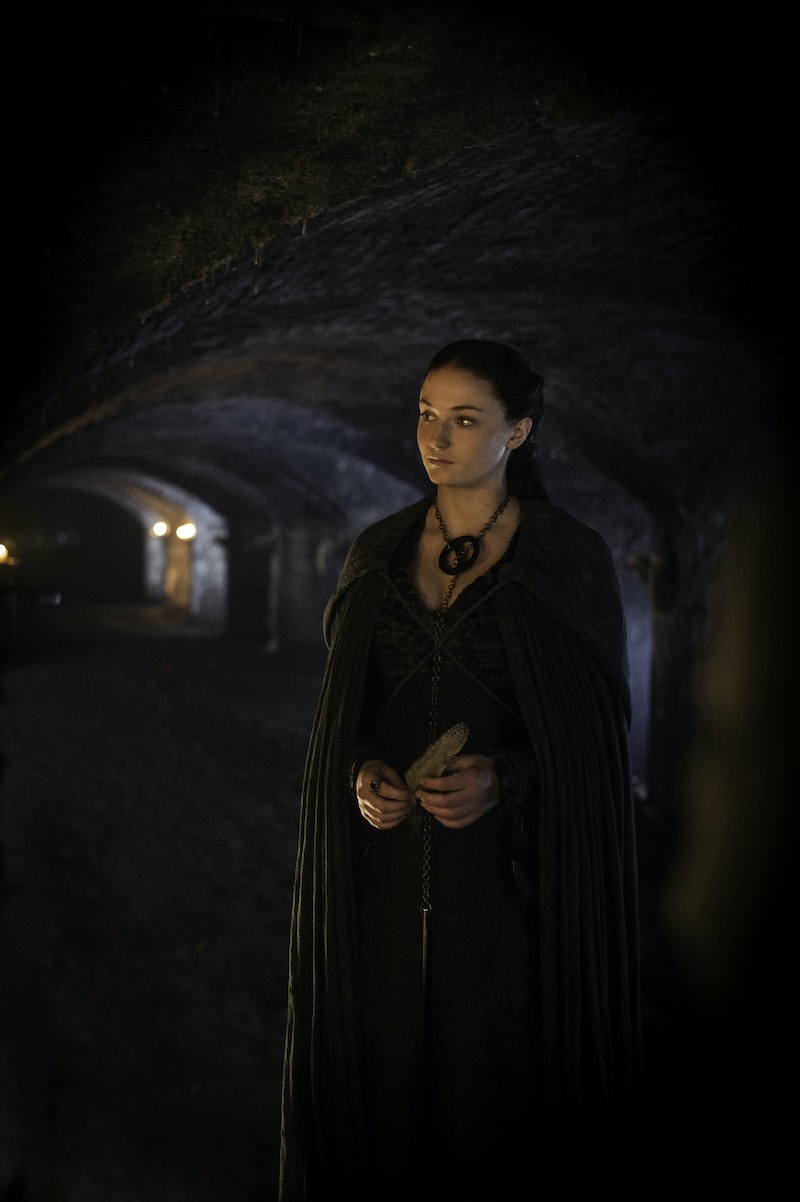 I love Game of Thrones. Like, a whole lot. So trust me when I say that it pains me to criticize the show on an issue that is neither character nor plot related. It's a bit petty, really. But I think it needs to be said. So, here we go: Game of Thrones needs to turn on the lights, or else I am sending them my ophthalmologist bill. For real, GoT powers that be, it's super hard to squint for a straight hour every week because your episodes are so freakin' dark.

And don't even get me started on the fight I had with my hairdresser sister over Sansa's actual hair color, because I couldn't truly see it, given the dark shadow following her around from place to place. I don't like losing fights. So, you see, right off the bat, I have about a few million axes to grind over this pressing issue, and I need to voice my displeasure. I hate to complain, but I can't just sit here and grumble any longer. I feel like I need to do something about it. It's what Khaleesi would do. I know it.

Game of Thrones needs to lighten up, literally, and here are 39 reasons why. At the very least, the show needs to get me a pair of nightvision googles.

1. When The Night's Watch Expected Jon To Read In The Dark

2. When The Brightest Thing In The Room Was Jaime And Cersei's Hair

Even the candles are dim.

3. When Mance Rayder Was Being A Creep

Or, at least that's what it looks like when someone just chills in the dark.

4. When We Weren't Sure If Mance Rayder Was Killed Or Not, Because We Couldn't Really See

5. When Arya Was Trying To Remember What The Sun Looked Like

I feel you, girl.

6. When Shireen Blended In With The Scenery

7. When Margaery And Tommen Were Playing Hide And Seek

8. When Myranda And Sansa Were... Wait, What Were They Doing?

Who even knows. I can't see.

9. When The Wall Of Faces Was Indistinguishable

Or the House of Black and White, or whatever.

11. When Myranda Had Night Vision

It's the only explanation for her being able to shoot an arrow in that situation.

12. When A Pivotal, Character Progression Was Happening To Arya, But We Couldn't Tell

13. When Ramsay Was Even More Menacing In The Dark

14. When Sansa And Theon Were In What Should've Been An A+ Hiding Spot

I'm calling bull on GoT's continuity here. They were well hidden in all that shade.

15. When Davos Was A Floating Head

16. When The Top Of Balon's Head And The Side Of Yara's Face Were The Only Things That Made It Into A Scene

Better than no Greyjoys in a scene, I guess.

17. When The Three-Eyed Raven's Cave Was At Its Cave-iest

So dark. So on brand.

They were lucky that no cops (or trolls) were manning that bridge.

But there was no difference between the lighting in Westeros and the afterlife.

20. When The North Probably Should've Invested In Some Better Street Lighting

Someone give the guy a hand.

21. When Jon Woke From The Dead

And his pale, lifeless body was the only thing illuminating the room.

22. When Arya Was In Yet Another Shadowy Scenario

What's the point of a close up when you can't see the person even if they're up close?!

23. When The Torch Situation Was An Actual Joke

The worst part is, this is actually fairly lit for a room in Westeros.

24. When Riccan And Osha Might've Been Wearing Matching Duds

It's difficult to decipher, but the dark blobs covering their bodies look way similar.

25. When Just Enough Sunlight Filtered In For Jon To Read

But not for us to not have to squint.

26. When The Greyjoys Were Legit Two Shadows

...Not in the Melisandre way.

27. When Tommen Found The Place That Most Looked Like Night During The Damn Day

29. When Maggy The Frog's Eyeliner Matched The Scenery

30. When The Waif Was Weirder As Ever

Standing in the dark, next to a dead body. Totes normal.

31. When Sansa Looked Like She Was A Death Eater

GoT, I'm tired of watching the show with a match in front of my screen. Help a girl out.