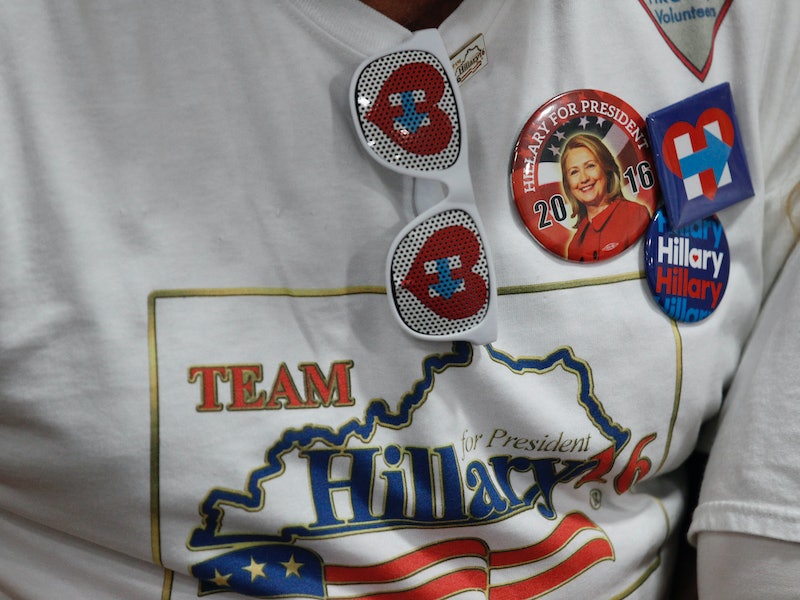 Although Kentucky may have only just begun to shake off its mint julep hangover following the excitement of the Kentucky Derby, the state will dive headfirst into the political frenzy of the presidential primary on Tuesday, May 17. While Kentucky's Republican voters caucused for their preferred presidential candidate back in March, the state's Democratic voters have held off on casting their votes. But the wait is over as Kentuckians head to the polls Tuesday to cast their ballots in the Democratic presidential primary. So, how many delegates does Kentucky send to the Democratic National Convention?

A total of 61 delegates will represent Kentucky Democrats at the party's national convention this July in Philadelphia. National party rules stipulate that the majority of those delegates are awarded to candidates using a proportional system of allocation in accordance to the results of the statewide primary.

Of the 61 delegates Kentucky sends to the Democratic National Convention, 37 will be district-level delegates that are awarded (based on voter preferences in each district) to either former Secretary of State Hillary Clinton or Sen. Bernie Sanders. These district-level delegates are elected at a Congressional District Convention in early June and are, interestingly enough, evenly divided between men and women in accordance to rules outlined by the Kentucky state Democratic Party.

Another 12 delegates, known as at-large delegates, will be bound to one candidate in accordance with the statewide primary vote. The remaining six of Kentucky's 55 total pledged delegates are known as "PLEO" delegates, or Party Leader and Elected Official delegates.

The state has five superdelegates who act as unbound delegates and throw their support behind whichever candidate they personally prefer. Only four of Kentucky's superdelegates are known at this time, as the state's vice chair position has yet to be filled. Two have said they will support Clinton at the party's national convention while two remain uncommitted.

As Kentucky's Democratic primary nears, both Clinton and Sanders have ramped up campaign efforts in the state. In the days leading up to Tuesday's vote Clinton visited churches in Louisville to drum up support and last-minute endorsements. Although she won the state fairly easily in the 2008 presidential primary, Clinton has had trouble appealing to Kentucky's mining community after she said, "We're going to put a lot of coal miners and coal companies out of business" during a rally in March.

Sanders is hoping to build off his recent wins in Indiana and West Virginia to snag enough delegates to keep Clinton, the current Democratic frontrunner, from obtaining the minimum number of delegates required to secure the party's nomination.

It's finally time for Kentucky's Democratic voters to select their favorite candidate, and the 61 delegates up for grabs would be immensely helpful to both Clinton's and Sanders' campaigns.