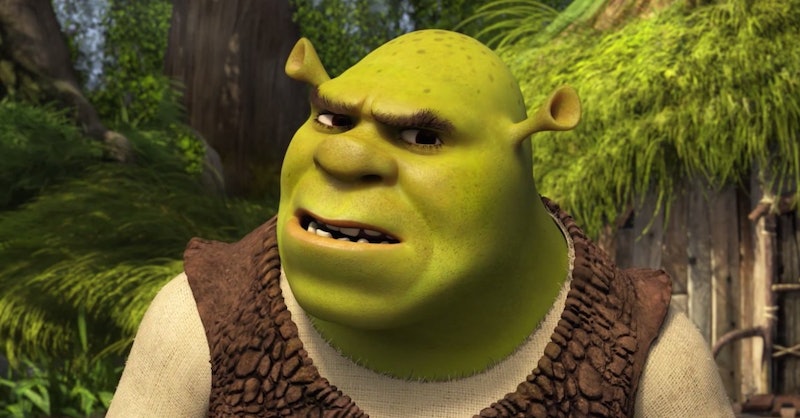 As I get older, I think of the movies I watched frequently as a child, and Shrek is definitely one of those movies. Released in 2001, Shrek introduced the world to an ugly green ogre with a heart of gold and spawned three sequels, a Broadway musical, theme park films, video games, and more. Because of the film’s 15th anniversary, I’ve done some digging into the background of Shrek, and boy, were there some casting changes in Shrek over the years.

If you’ve never seen Shrek, don’t think that it’s just an animated movie for children. DreamWorks did a great job on making the film work on both adult and kids levels — seriously, some of the jokes are pretty dirty. Based on William Steig’s 1990 picture book, Shrek follows ogre Shrek as he tries to get hordes of banished fairy tale creatures out of his isolated swamp. Shrek likes to be alone, but Lord Farquaad of Duloc has forced all fairy tale creatures to move away from Duloc — he thinks they’re freaks. Before Shrek and his donkey friend, Donkey, fix this whole situation, Shrek finds himself in love with the beautiful princess Fiona, who has a secret of her own — she turns into an ogre every night due to a curse set upon her as a child. I won’t ruin it all for you, but Fiona and Shrek are in love by the end of the film and Farquaad finds himself ousted.

Austin Powers and Saturday Night Live alum Mike Myers voiced Shrek’s thick Scottish brogue, and the voice of Donkey comes from comedic superstar Eddie Murphy. These voices are so integral to Shrek as a whole, but neither actor was the first choice for the film. Take a look and see who else was considered for the movie Shrek.

Could you picture this star of Caddyshack and Groundhog Day playing an ogre in a swamp? I have a hard time myself, but apparently Steven Spielberg could. When Spielberg bought the rights to the book Shrek way back in 1991, he pictured it as a regular 2-D animated movie for his company, Amblin Entertainment, with Bill Murray’s voice in the title role.

All that stuff about Bill Murray? Steve Martin was the guy that Spielberg had in his mind as the voice of Donkey. Again, I just can’t see it. Fortunately, Spielberg couldn’t get the movie off the ground until he founded Dreamworks SKG in 1994, and by then things had changed.

Chris Farley was the original voice of Shrek , and he had recorded nearly all of his lines in the film before he tragically died of an overdose in December 1997. This Shrek was written specifically for him — Myers stepped in soon after in honor of his departed friend.

Garofalo told MTV in 2007 that she was originally supposed to voice Princess Fiona in Shrek, but she was inexplicably fired. She maintains that no one told her why she was pushed off the project in favor of Cameron Diaz.

This star certainly get vanity get the best of him — Cage was being considered for Shrek by DreamWorks head Jeffrey Katzenberg, and Cage turned it down because he didn’t want to play an ugly green ogre. He told the Daily Mail in 2013, “Maybe I should have done it, looking back.” Uh, yeah, Nick. You should have.

Though Shrek would be so different with any of these actors cast in the lead roles, Myers and Murphy’s iconic roles are a deservedly prized part of animated cinematic history.