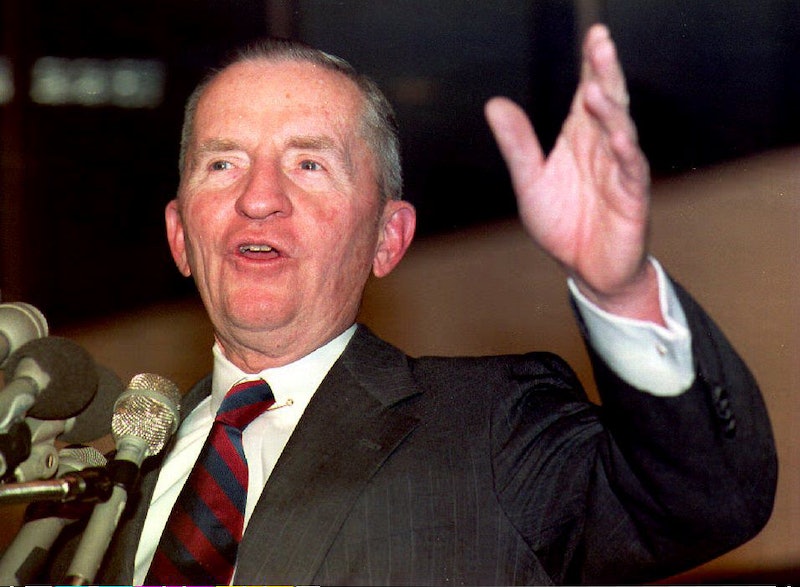 Way back in 1992, I was just a small child. I recall my parents discussing the politicians vying for the presidency, like Bill Clinton, George H. W. Bush, and a man by the name of Ross Perot. I remember thinking of Perot as the one with the big ears — neither a Democrat nor a Republican. As I aged, I learned that Perot was more than simply some guy with potentially good hearing; he secured 19 percent of the popular vote. What happened to allow room for a successful third-party candidate in the 1992 election? Could something similar occur this time around, particularly with the general Republican distaste toward Donald Trump?

This was something almost unheard of before — and certainly after — 1992. Bush had promised during the 1988 Republican National Convention that he would avoid any tax increases, as he stated in his famous "read my lips: no new taxes" pledge. Unfortunately, that promise did not last beyond 1990, as a rising budget deficit caused him to renege. Many of Bush's supporters were not happy, and this led to an early challenge from Pat Buchanan, who won nearly 37 percent of the vote in the New Hampshire primary. Somehow, Bush pulled through and made it to the general election, where he faced the Democratic Clinton and the independent billionaire Perot.

Clinton was facing some scandals of his own, however. Just prior to New Hampshire, his campaign almost failed after coverage of his alleged 12-year affair with an Arkansas state employee, Gennifer Flowers, made national headlines. In an interview with 60 Minutes, Clinton admitted to having marital issues with his wife, Hillary, and he eventually saw a resurgence of popularity. He ended up besting his primary competitor, California Governor Jerry Brown, for the Democratic nomination.

Between incumbent Bush's weakened economic stance and Clinton's tarnished reputation, many Americans were still dissatisfied with their presidential candidates. It was perfect timing for a third-party candidate to rise, and that is exactly what Perot did, telling Larry King that he would run for president only if voters would register him as a third-party candidate in all 50 states — and they did. He dropped out of the race on the eve of the Democratic National Convention before returning a few weeks later. Clinton was eventually elected that November.

One can draw many comparisons to the current election and its two major candidates — though Bernie Sanders is still in this race and holding strong — who are both widely disliked and scandal-ridden. Could this prove the "perfect storm" for the rise of another third-party candidate, as America saw back in 1992? Could Sanders even reemerge as that candidate after the conventions?

There are some solid months ahead for major changes to occur. Back in 1992, Perot won more than 19 millions votes to Bush's more than 39 million and Clinton's nearly 45 million. It was possible for him to make some major waves. Perhaps 2016 is the year this happens again.