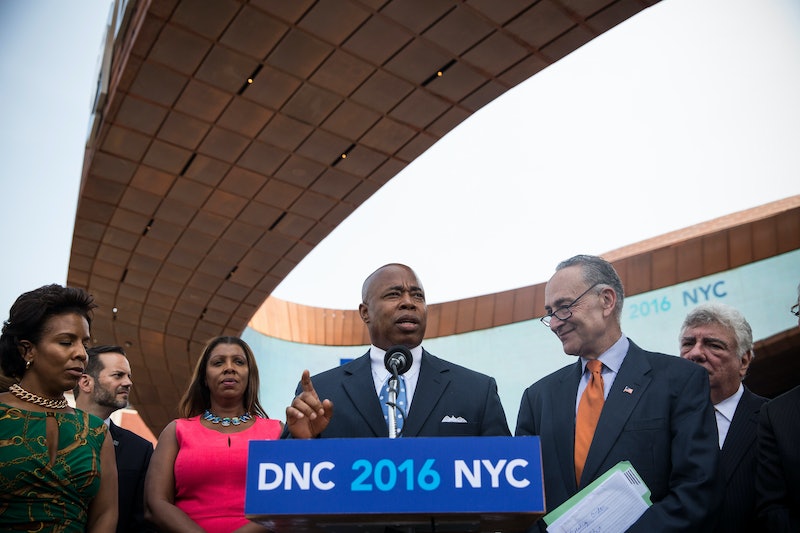 With the primary voting process winding down for both parties, the next hurdle to come is the actual nomination procedure at each party's national convention. So, how exactly do party conventions nominate candidates? The nitty-gritty of the rules governing each party's particular convention haven't been finalized yet, but it is still possible to draw a rough sketch based on how recent conventions have worked. It'll all come down to the delegates and the rules committees; or in other words, who will be allowed in, and what they'll be allowed to do once seated.

However, the exact rules won't be finalized until each respective rules committee convenes just before the election. On the Republican side, two delegates from each state are appointed to the rules committee to oversee the finalization of the rules, and to vote them through. According to Emily Goodin's analysis at Real Clear Politics , "The most important time during the Republican Convention could be the week leading up to the convention."

The Convention Rules Committee will convene a week before Paul Ryan opens the convention. In a February article from Politico, "sophisticated campaigns" were aiming for the rules to allow an "open-first ballot," leading to a knock-down-drag-out power struggle on the convention floor.

The Democratic National Committee's convention rules will be determined by the DNC Rules and Bylaws Committee. They've been meeting over the course of the last two years, just like their counterparts in the GOP, to develop the rules for the event. This is one of the essential functions in a political party, and is one of the most critical aspects of the party's official structure, along with the platform committee, and the board itself.

While all signs point to a contentious convention process on both sides of the aisle, remembering the structural similarities can make it a bit easier to see the larger picture. Republicans and Democrats in positions of established power in their own parties this year will be under an immense amount of pressure by their populist, activist bases to support their preferred candidate. The only main difference is that establishment Democrats are largely doing a better job at channeling the demand for change away from their preferred candidate, based on the way that the superdelegates are supporting. The GOP, on the other hand, is farther gone, and the establishment voices in the party haven't been able to coalesce around a single candidate to date.

Until the first stage of the primary process concludes, and each and every state delegation is determined, it truly is anyone's guess to see what will happen once the gavel drops to open the national conventions this July. It is certainly shaping up to be an interesting summer.