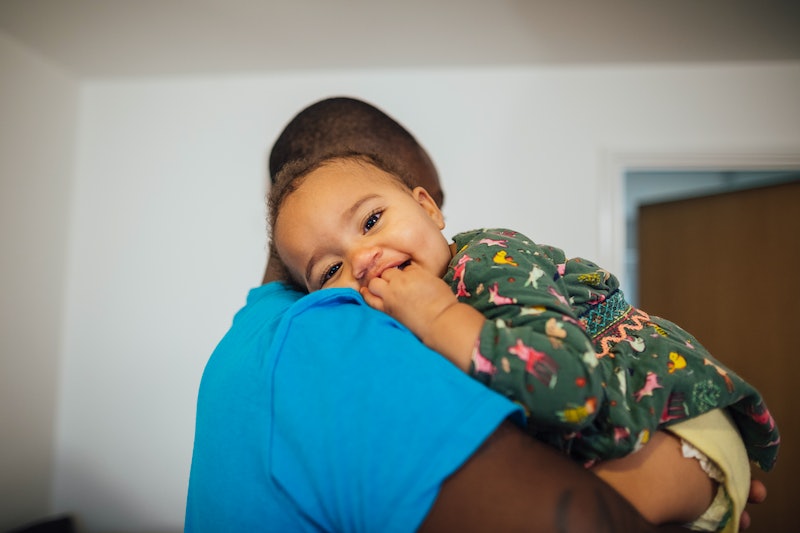 A lot of science about the genetic inheritance of good or bad health has focused on mothers: whether they smoked or drank during pregnancy, what obesity means for their children, and so on. But a new review of studies from Georgetown University Medical Center, published in the American Journal of Stem Cells this month, is putting a new spotlight on the genetic role that fathers play in the health of their kids, and it's more far-reaching than you may have thought. What science calls "epigenetic inheritance patterns" — changes made to gene expression by experiences and habits, which are then passed down to kids, may have a serious influence on your health throughout your life.

And it's more complicated than just whether your mom ate well: a study in 2015 found that some of the children and grandchildren of Holocaust survivors had inherited "traumatized" genes, making them more likely to suffer from stress disorders. But the scientists at Georgetown were trying to correct the tendency to focus only on maternal lifestyle and its impact on genetics. This sort of study has often just looked at a mother's epigenetics, "due to her immense prenatal and postnatal investment in her offspring," the Georgetown scientists said; but we're discovering that dads have a huge role to play too.

The idea of epigenetics itself has been really controversial over the years: Nature reported in 2013 that scientists were only just beginning to accept the idea after decades of skepticism. But it seems that it's now looking like the forefront of new ideas about our health and DNA. Here are four ways a man's health affects his offspring.

1. An Older Father Means A Higher Likelihood Of Schizophrenia & Autism

One of the most famous studies the Georgetown scientists mentioned is one you may have heard of: the one that linked older fathers to a higher risk of schizophrenia and autism in children. It came out in 2013 in the journal Neurobiology of Disease , and found that "advanced paternal age" (basically anything over 45) was a significant risk factor for children developing psychotic or autism spectrum disorders.

Why is this so? "A man aged 30 produces sperm that are the result of almost 400 cell divisions, and one of 50 sperm cells that have gone through more than twice that number. Each time a cell divides, its DNA is copied in its entirety, and the more times DNA is copied, the more likely are errors and misprints to appear in the genetic code," Dr. Christopher Badcock, author of The Imprinted Brain, explained to Psychology Today.

The Georgetown scientists explain that the risk of schizophrenia in a kid increased with every five years of age in a father, possibly because of these "misprints" in the genes of sperm.

2. Your Dad's Diet Impacts How You React To Food

It turns out that both starving and obesity can send signals down to offspring, according to various studies. One bunch of research, published in 2006, found that in one Swedish community, if the grandfather or father hadn't had much food when he was young, the children were less likely to die of cardiovascular problems or diabetes. And the study found something even weirder: the only kids who showed this inherited impact were boys. If sperm can collect "information acquired from the environment in early life," as the scientists put it, it makes sense to pass that down to their kids to help them survive.

The other side of the coin appears to affect kids too: an obese dad. A gigantic (and famous) experiment called the Framingham Heart Study, which has been going on since 1948 and involves many generations of the same Massachusetts families, found a link between obese fathers and elevated serum alanine aminotransferase (ALT) levels in their kids, which tend to cause metabolic problems. And studies have accumulated that show that high-fat, unhealthy diets in dads may pass down problematic legacies to both male and female kids. Some scientists are now discussing men's health as the new frontier for fighting obesity and diabetes in the next generation.

3. A Dad Who Smokes May Cause DNA Damage

Smoking is bad for you, and if you're a dad, it turns out it's also likely bad for your kid. The Georgetown scientists mention that "increased smoking has been associated with ejaculate containing spermatozoa with significantly damaged DNA": essentially, the more a dad smokes, the more likely he'll produce sperm with DNA problems. And one study found that if a dad was smoking at the time a baby was conceived, it was more likely to show DNA damage in its blood. But what might that damage actually do to kids?

The answers are a little weird. One study in 2014 found that if dads started smoking really young (before the age of 11), their sons seem to have reacted in an interesting way: becoming overweight. In a study of 9,886 fathers, the ones who smoked very early had by far the biggest children, with the highest BMIs and total fat mass. The scientists corrected for other factors, but the discovery was still notable. And no, it didn't show up in daughters. We're still looking at other things the DNA damage may do, but it's likely not going to get simpler.

One of the biggest parts of the Georgetown paper focused on the impact of paternal alcoholism on babies, and the results are pretty sobering (pun intended). Their research found that 75 percent of all children with fetal alcohol syndrome, a collection of disorders including low birth weight and neurological difficulties, had alcoholic fathers. We're not entirely sure how alcohol abuse in dads makes its way to children genetically, though the Georgetown researchers think the alcoholism might interfere with a process called hypomethylation of genes, which alters and develops genetic expression. But the impact shows up in all sorts of ways: babies' individual organ weights, their overall brain size, and their likelihood to have holes in the heart, just to pick three examples.

So what's this got to do with you? Well, it means that you shouldn't just know your mother's health history: you should also know your father's, including his weight, traumatic events, diet, and whether he ever smoked. This sort of information may one day provide unique genetic insight into your health and the health of your kids. Definitely worth the phone call.

And if you're trying to get pregnant yourself, know it isn't only a woman's health that matters — a man's lifestyle, age, and genetics can play just as significant a role in the health of a baby.