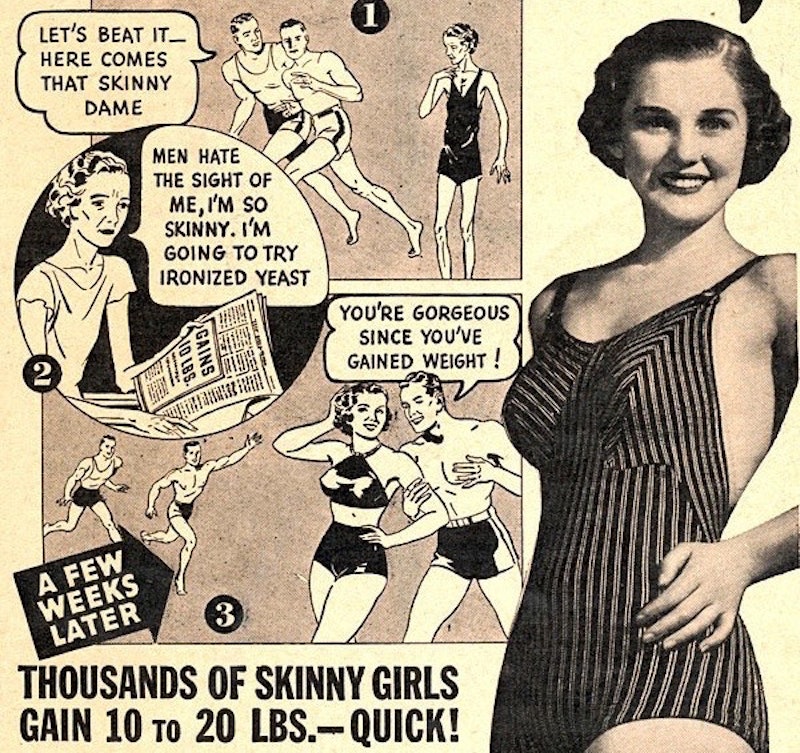 Women have been made to feel bad about their breasts, in one way or the other, for far too much of human history. It's only really in the past few centuries that bigger has supposedly meant better in Western civilization, but never fear: a host of solutions are here to make it "better"! Want a freezing-water pump? How about a diet of goat food, or shoving half a coconut inside your corset?

The thing you've got to remember about quack "cures" pre-late 20th century is that there was no legal requirement for anybody to tell the truth, test their products, or even reveal what was in an item and how it was meant to work. You could buy a cream for boosting your bust, accompanied by a full-page essay from various doctors insisting that it worked, and have no idea what it contained or the results to be expected. So alongside the hilarity is actually a bit of terror: who knows how many women were potentially hurt by vibrating their breasts with an electric cup, or coiling wire around their hapless bust? And all to conform to nonsensical societal expectations about "attractive" breasts, when all of them — big, small, big-nippled, hairy, lopsided — are innately gorgeous.

Here are six genuine recommendations for women with "bad" breasts throughout history. Get the sow's blood and hook up the cold water douche system. And next time you feel awful about your breasts for whatever reason, remind yourself of how arbitrary and obscure beauty standards are.

Tip #1: If They Get Too Large, Rub Them In Sow's Blood

The idea of wanting to increase your breast size would actually have been unthinkable to fashionable women in various periods of Western history; small breasts were often associated with chastity and modesty, while large ones were thought to create problems or indicate lustfulness.

Roman physician and anecdote-collector Pliny The Elder's tips in his Natural Histories concerning boobs are about how to reduce their size, whether after childbirth, post-breastfeeding, or just because they were getting in the way. Apparently, sow's blood was the best all-purpose option: rubbing it all over was thought to mean breasts wouldn't become too large.

The corset had very few advantages, but one possible opportunity for women of less "shapely" persuasions was the chance for concealment. Namely, the concealment of breast pads. Yep, chicken fillets and other illusions of bountiful busts have been around for a very long time, and inventors decided to get involved. Wikimedia Commons has an entire archive of patents from the U.S. Patents Office in the 18th century, all concerned with "bosom pads," and they don't so much boost as utterly rearrange.

One particularly violent-looking proposition involved curls of wire coiled around the breasts to make them poke forwards alarmingly, but others were more straightforward: they bulked out under clothes with tucked-in inserts, pads, even items with realistic-looking nipples. Another option? You could also just shove a bit of wood down your bra. Easy. (You will not be surprised to know that all the patents were by men.)

Ointments, lineaments, and diets of all kinds have been recommended for "natural" breast-boosting over the years. Bust creams often advertised creaminess and whiteness as their big sells, though because of a lack of advertising laws, we don't know what was in them. The French market in the 18th century was dominated by "pillules Orientales," or Oriental pills, the product of a pharmacist called Ratie, who took out full-page ads for them without once giving an ingredients list. And they're still a part of the current market, with creams advertising everything from hormonal swelling to new cell growth to lure in the woman unhappy with her breast size. (No, none of them actually work.)

The most interesting botanical suggestion, from a scientific perspective, has to be goat's rue, or galega officinalis. It was recommended by a French doctor in the American press in 1910 for the boosting of breasts, based on the folk belief that it increased milk production in goats. More milk, more bountiful lady-parts! The twist in the tale is that the milk production belief, at least, turns out to be true: A study in 2010 found that administering small doses of goat's rue to sheep did in fact increase their milk yield by about 16 percent, which is pretty remarkable. It doesn't seem that correlates to any boost in the breast department for women, though. Sorry.

I can personally testify to the real existence of these ads: they appeared throughout the comic books for children in the 1930s, preserved by my parents as childhood toys. And if you've ever taken a course in advertising or gender studies, they'll probably be familiar to you as a demonstration of the rules of commerce: take something, make it unattractive, propose a "cure," profit. The "unattractive" thing in these ads was a skinny woman with a flat chest, and the cure? Ironized yeast. Lots of it.

Interestingly, Karen Sternheimer in Celebrity Culture And The American Dream points out a rather sneaky reason for the sudden rise in yeast products on the weight-gain market in the 1930s: a yeast surplus. Apparently, yeast manufacturers suffered a bit of a problem when people stopped making bread at home and started getting it from grocers, so they looked into new ways of marketing their product. Hence the sudden "magical substance". And yes, weight gain will help your boobs grow, but ironized yeast on its own hasn't been discovered to have any weight-ballooning properties.

One of the most notably alarming quack remedies for bigger breasts emerged in the 1930s and '40s, when the hourglass figure and exaggerated "torpedo" breasts of people like Jane Russell became the fashion. Europe, in particular, was in thrall to hydrotherapy massage to increase the bosom, involving a personal hose, freezing water, and a lot of angry discomfort.

The "douching" technique to increase breast tissue via massage with lots of cold water was particularly popular in France, and a lot of French advertisements survive for breast-growth systems. It was a pretty simple concept: attach a specially designed breast-shaped cup and hose to your bathroom sink, put the cup over your breast, run the cold water, and (presumably) see the increase. Cold actually constricts blood vessels, as anybody who's ever exposed their nipples to freezing weather will know, so this one was suffering for nothing.

Tip #6: Use A Massaging Breast Pump

Michelle Lovric over at The History Girls has a fascinating history of the breast-increase market, but one of her discoveries stands out as particularly alarming. Imagine an attempt to make your breasts bigger by basically putting a toilet plunger over them and pumping vigorously by hand or using electricity. That was the essential principle behind a generation of breast enlargers, and it all sounds really uncomfortable.

Lovric's found examples as far back as the 1867 Sears-Roebuck Catalogue, which featured a product called "The Princess Bust Developer," a terrifying-looking machine that was designed to fit over the breasts and gently "massage" them. (One can only hope they doubled as stealth vibrators.) Fortunately, there aren't many surviving items to test nowadays, so you can resist the temptation.

If you're going to take away anything from this, make it the knowledge that your breasts are precious things that definitely don't deserve to be maltreated or hated, particularly to serve randomly shifting societal whims about the "ideal look". Give them a hug and buy them a nice bra instead — or stop wearing bras altogether.

More like this
How To Fight For Reproductive Rights, Based On How Much Time You Have
By Courtney Young
Michigan’s Governor Is “Going To Fight Like Hell” To Protect Abortion Access
By Andrea Zelinski
16 Novels That Paint A Realistic Portrait Of Abortion
By K.W. Colyard
6 Abortion Advocates To Follow On TikTok
By Sara Youngblood Gregory
Get Even More From Bustle — Sign Up For The Newsletter