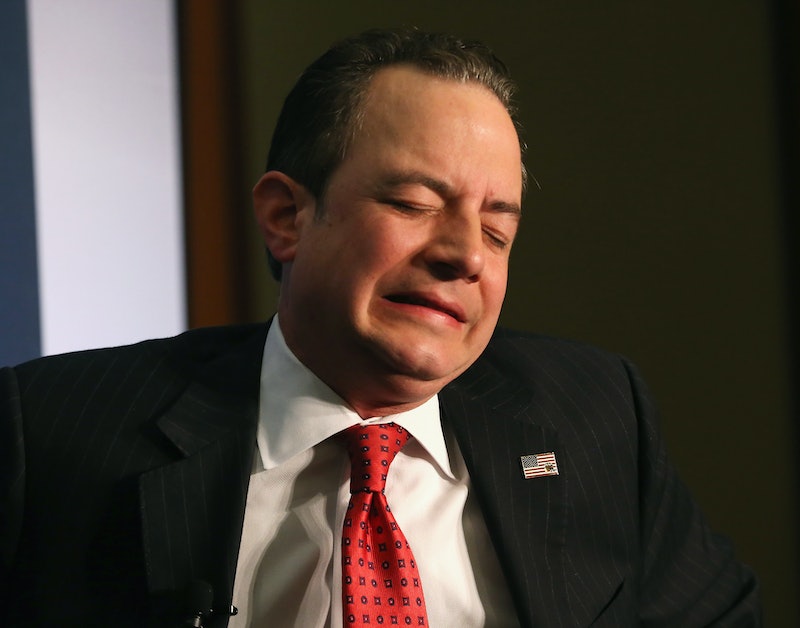 Last week, an exposé in The New York Times made explicit what Donald Trump's comments toward women like Megyn Kelly and Rosie O'Donnell seem to have implied: That he has always treated women in general with contempt. Although Trump has continually declared that women love him and will vote for him, the article made clear that his conduct toward them is and has been consistently unacceptable. End of the line. So why on earth did Republican National Committee Chairman Reince Priebus go on television and declare that "people just don’t care" about Trump's treatment of women?

He's got to be kidding. The statement came during an interview on Fox News Sunday with Chris Wallace, who asked Priebus if the Times article bothered him. His response is incredible, given that he is the head of a major political party that is looking to win the White House:

What I would say is, you know, we've been working on this primary for over a year, Chris, and I’ve got to tell you, I think that all these stories that come out and they come out every couple weeks, people just don't care.

Then he tries to pivot the conversation back to a Trump-Clinton contest, asking which candidate is "going to bring an earthquake to Washington, D.C.?" Whether an earthquake is good or bad in Priebus's world remains unclear. I'd argue they're usually destructive, upending the day-to-day rules of nature and shaking everything to their core. And I guess that is Trump, but why defend that sort of force?

That's what Priebus is doing. His main point is that the rules don't apply to Trump, because he can come and shake the foundations of our democracy without any consequences. Priebus claims that "the reason [Trump's] where he is at is that he represents something much different than the traditional analysis of individual candidates."

So in other words, sexist rhetoric has worked in the primary, and therefore Trump gets a pass. Since he has been so successful running a misogynistic campaign, the rules of fairness, good judgment, and character don't apply.

What is he thinking? This is not a way to win a general election campaign. It may very well be true that the traditional analysis hasn't applied thus far. But come November, Trump will be looking at a very different electorate than that of the GOP primaries. There will be minorities, there will be Muslims, and, most notably for this controversy, there will be women.

And women right now do not like Donald Trump. As of March, some 70 percent of women have an unfavorable view of him. Those women are going to care about stories like this. And the Republicans should be very worried. If this is their version of damage control, it's not helping.

Priebus also went on ABC with Jonathan Karl and managed to make it through the interview without another "don't care" comment. He even admitted, "These are things that he is going to have to answer for." But he also reiterated his stance about Trump and the rules:

After a year of dealing with this primary, one on one — and you know it's been a lot — I don't think the traditional playbook applies, Jon. We've been down this road for a year. And it doesn't apply. He's rewritten the playbook.

That may be true in the primary, but he's going to want to amend them quickly if down-ticket Republicans — let alone Trump — want any hope of winning in November.