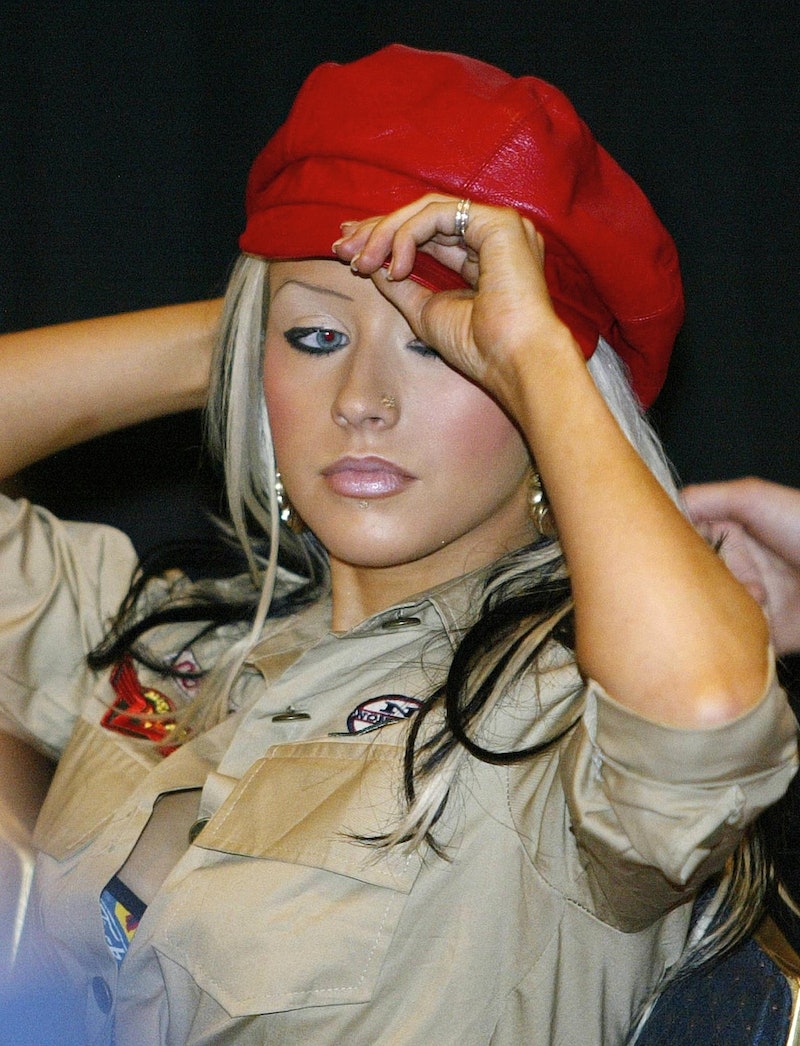 We all have our icons from the early millennium who defined the decade. For me, it was totally Xtina. Christina Aguilera's early 2000s fashion was, is, and always will be legendary. Back then, she was breaking away from a cookie-cutter, good-girl image and seemingly trying to separate herself from the style and her association with Britney Spears. I don't think anything has ever scandalized me in the way that the "Dirrty" video did, so props to Aguilera for taking risks and seeing them pay off.

From getting down and dirty to reviving the '50s aesthetic for "Candyman," Aguilera tried everything to stand out, and stand out she did. While all her songs from this period remain certified bangers — perfect for drunk karaoke and reminiscing about my pre-teen-hood — her style is truly one that epitomized what the turn of the century was all about.

This list of Aguilera's most early 2000s outfits isn't here to make fun of the star, but to proudly commemorate how perfectly she stuck to (if not created) early '00s style. Without Aguilera, would early '00s fashion even be as exciting to look back on as it is? So go forth and appreciate how brilliant these looks actually were — both for the new millennium, and for contemporary nostalgia purposes.

If "Lady Marmalade" didn't shape your childhood and introduce you to glamour, then you undoubtedly missed out. The next-to-nothing outfits that all the women in the video wore honestly changed my life, but Aguilera's always stood out amongst them.

I hate these hats and I still do. If they ever come back in style, please end me. But they were a pivotal part of early '00s style and if anyone could pull them off, it was Xtina.

Why don't celebrities still wear butt-less leather chaps? If this isn't the most iconic early '00s Christina Aguilera look, then I don't know what is.

That scarf better be a shout out to Tom Baker's Doctor Who. Possible cultural references aside, there isn't a single part of this outfit that would be acceptable in 2016. And that's why I love it.

Xtina really did love those hats, didn't she? I adore how ridiculously close to naked she is in this outfit, though. It's perfection.

I swear that every celebrity ever has worn a suit with just a bra under it to make a statement. But there's something so authentically noughties about how Aguilera sported the look here.

7. Making Out With Madonna

From Britney Spears to Drake, Madge has definitely had some steamy on-stage kisses. I almost forgot that Xtina made the lucky list, too. Madonna's lips are the ultimate early '00s accessory, TBH.

This was a shout-out to the '90s just after the '90s had ended, but what completed the look was how much Aguilera scandalized the world by dyeing her hair black.

9. One Way To Do All-White Everything

I actually kind of want to wear this look now. I could totally imagine it in a Yeezy collection.

Here she was reprising the classic '90s film Clueless with another perfect all-white look.

Like, what even is this? What does it mean? Xtina looks like a Furby, which is very early '00s, I guess.

This outfit makes me believe that if I got into a fight with Christina Aguilera, she would definitely win.

Aguilera was rocking athleisure before it was even a word.

If I haven't convinced you that Christina Aguilera was the style icon of the entirety of the early '00s — a goddess in her own right and completely underrated in every way — then I've unfortunately and miserably failed at my existence. My mind shall never change, though, and I have this 15-point list to showcase why.

More like this
Early 2000s-Era Rhinestone Tattoos Are Back, Baby
By Jordan Murray
Netflix Reveals First Look At Wednesday In The 'Addams Family' Spinoff Series
By Bustle Editors
Kenan & Kel Just Reunited At The 2022 Emmys & Twitter Is Overjoyed
By Grace Wehniainen
Tilda Swinton’s Neon Yellow Hair Is More Than A Style Statement
By Justine Knight
Get Even More From Bustle — Sign Up For The Newsletter