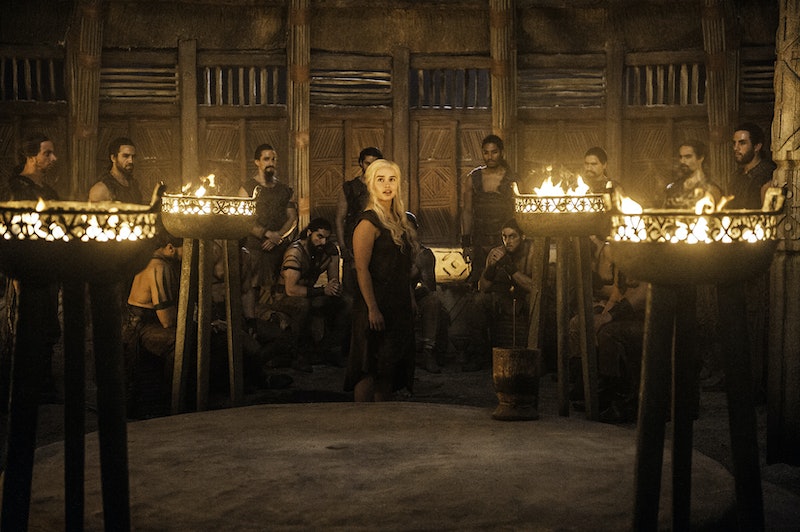 There's no denying that Daenerys Targaryen has had more than a few mic-dropping moments throughout the course of Game of Thrones history. Whether she was unleashing her dragons onto her enemies or rising up out of the flames after setting the Dothraki Khals on fire, this Khaleesi knows how to make a proper entrance and exist. But as impressive and empowering as Sunday's big moment was, there's one factor that just isn't sitting well among many fans, especially those who are the tried and true book readers. I'm referring to how Dany is immune to fire on Game of Thrones , considering that George R.R. Martin himself has stated directly that the Targaryens aren't actually fire proof.

As reddit user, amthewalru5, pointed out, Martin specifically addressed this question in an online Q&A back in March 1999, stating that "Targaryens are not immune to fire" and that "the birth of Dany's dragons was unique, magical, wonderous, a miracle. She is called The Unburnt because she walked into the flames and lived. But her brother sure as hell wasn't immune to that molten gold." Martin is, of course, referring to Viserys Targaryen, who died after Khal Drogo crowned him by pouring molten gold over his head. While watching him die, Dany remarked that his lack of immunity to fire proved that he was no true dragon because "fire cannot kill a dragon." (If you can't stand the heat, you don't get to rule Westeros... or something like that.)

The point is, though, that we've seen Dany avoid getting burnt multiple times now, first while walking into a scalding hot bath in the pilot and then again after she emerged unharmed from the birth of her dragons. Viewers seemed to accept these moments, especially the latter, on the grounds that Dany must share a magical Targaryen bond with the dragons themselves. However, this last encounter with flames had nothing to do with the creatures at all. So was Martin lying to us (much like they all were lying about Jon Snow's death) or could Dany just be a unique exception to the rule?

I think our Mother of Dragons has more than proven to be an incredibly strong ruler and overall badass lady. So even if not all Targaryens are immune to fire, is it really too impossible to believe that she could be one of the select few to possess that unique talent? I mean, we're talking about someone that has mothered not one, not two, but THREE dragons. I'd say she's capable of pretty much anything at this point.

As for Martin's remarks, it is puzzling that he would make such a bold claim and then be seemingly OK with the series contradicting that statement. But hey, 1999 was a long time ago. Maybe he's had a change of heart, or maybe he felt that it was right for the show to go in a different direction from the books in this regard. Either way, Dany is officially fireproof and we should just learn to accept it. This girl is on fire and it's going to take more than a few measly flames to bring her down.