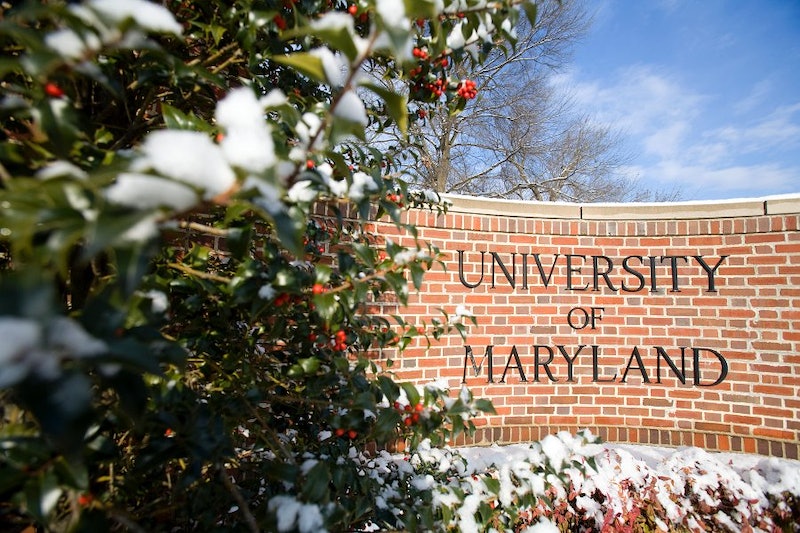 I was standing high in the bleachers of Byrd Stadium, watching the Maryland Terrapins dart around on the field below. It was October 2011, two months into my freshman year of college at The University of Maryland. Next to me, two friends stood screaming at the players, goTerpsgetthemgetthemgetthem! One of them turned to me and smiled wide. Isn't this the best?

I tried to see what she saw: the excitement of a Homecoming football game; the camaraderie between 40,000 fans; the never-ceasing thrill of finally being in college. In that moment, I loved Maryland. So I smiled and nodded in agreement, pretending that the feeling wouldn’t fade in a matter of minutes.

Whenever people hear that I transferred, they widen their eyes and shake their heads. "I could never do that," they say. "Starting all over? It’s too scary." They mean well, but they’re wrong. Coming to Emerson was the easiest thing I’ve ever done; staying at Maryland, attempting to fall in love with it — that would’ve been brave.

I had been unhappy at Maryland since before I'd even arrived. At orientation that July, I laid awake in my borrowed dorm room, watching my roommate soundly sleep. I had wondered if this was what college would feel like: vast, confusing, lonely.

I shook it off as summer jitters, telling myself that it was just orientation; college would be so, so much better. After all, I had picked Maryland because of how much it offered: a big campus, filled with thousands of strangers and unlimited options.

It wasn’t the 'best' school I’d been accepted to, but it was the biggest change. With over 30,000 students, it would be the polar opposite of my small, homogenous hometown; a New York suburb where my graduating class was made up mainly of my pre-school classmates.

When I got to Maryland, I made friends and joined clubs. I attended football games, debated sororities, and finally learned to navigate the massive campus. When my parents asked, I told them I was happy, because I was so close to convincing myself that it was the truth.

But I hated football. Greek life intimidated me. My classes were huge, and none of my teachers knew my name. My roommate spent every moment with her boyfriend, a loud, obnoxious guy who was always in our room. I liked my friends, but we had nothing in common; they were pre-med or marketing majors, spending their days surrounded by formulas and PowerPoints as I struggled to find an English class without Shakespeare in the title.

At parties, so many people squeezed into one room that I'd often find myself gasping for air, pushing through sweaty masses to find an empty space where I could breathe. I got drunk, but it wasn't fun; just a way to make the crowds a little less overwhelming and the nights a little more tolerable.

One night, I had a panic attack and called my mother, shaking and crying, at 2 AM. I told her that maybe I wasn't cut out to handle college after all. I spent the next few weeks in dreaded anticipation of another attack sneaking up when I least expected it.

The answer arrived in my head one day without warning: I need to leave. It seemed so simple, so silly that I hadn't thought of it before. College wasn't the problem — I had looked forward for college my entire life. No, the cause of my unhappiness was the school I'd chosen.

I called my parents, did my research, and visited a new school, Emerson, over winter break. At the end of March, I got in. Two months later, I left Maryland for good.

When people ask me about transferring, I tell them it's just something I needed to do. Maryland wasn't for me, I say. I needed a new environment. I list all the programs that Emerson offers; the benefits of living in a city instead of a campus; of having 12 people in each class instead of 200.

I fit in at Emerson. It's a writing-focused school with a running joke about an undefeated football team that doesn't exist. Transferring here was the right choice.

Whenever people hear that I transferred, they widen their eyes and shake their heads. "I could never do that," they say. "Starting all over? It’s too scary." They mean well, but they’re wrong. Coming to Emerson was the easiest thing I’ve ever done; staying at Maryland, attempting to fall in love with it — that would’ve been brave.

I could’ve tried. I was unhappy, yes, but not all of that can be blamed on Maryland. Part of it was my fault.

I came into college already lost, with too-high expectations about a school I probably shouldn't even have applied to — let alone attended. I depended too heavily on my parents and my friends. I used their happiness to convince myself that mine was imminent. I hung out with people I knew I didn't like, and spent more time complaining about the things I hated instead of searching for what I enjoyed.

Not liking my college was embarrassing. The feeling that I had failed lasted long after I left for Emerson, and it's still here, even now. Sometimes, I wonder what would've happened if I had only tried harder. Maybe I could’ve learned to love Maryland. Maybe I ran away.

I'll never stop wondering if I could've made it at Maryland, if only I'd held out just a little bit longer. I'll never find out —but I don't regret that. I do know, though, that if I'd stuck around to see, it would've been brave.

More like this
These Artists Are Reimagining Black History Month To Create A Better Future
By Katie Mitchell
25 Inspiring Quotes From Black Women To Celebrate Black History Month
By Kyli Rodriguez-Cayro and JR Thorpe
19 Instagram Captions For Celebrating Black History Month
By Ayana Lage
These 3 Signs Are The Master Chefs Of The Zodiac
By Kristine Fellizar
Get Even More From Bustle — Sign Up For The Newsletter
From hair trends to relationship advice, our daily newsletter has everything you need to sound like a person who’s on TikTok, even if you aren’t.