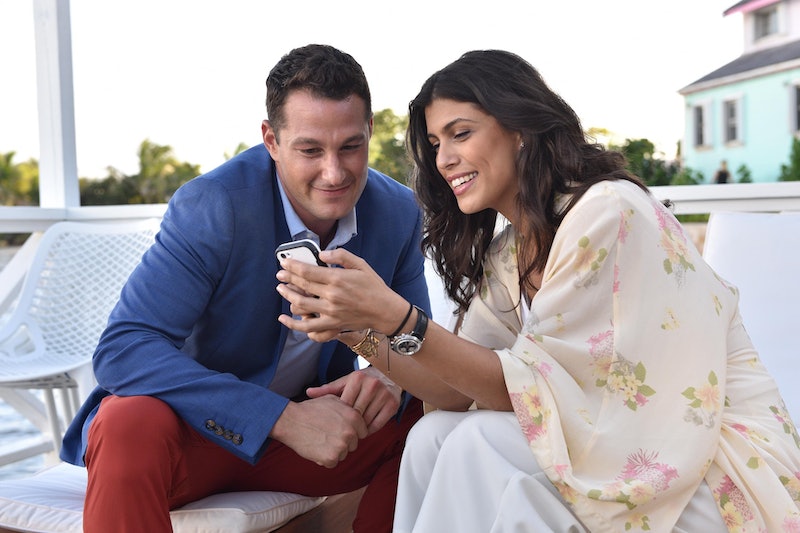 The women of Coupled will be as curious as the audience to see Coupled's very first suitor, Alex Lagemann, make his first appearance on the island. The cast of 12 women will have their choice of whether or not to meet up with Alex and see if he's interested in taking them on a two-person date. And when faced with their initial choice of whether or not they feel the spark of chemistry with Alex or want to wait for the next guy, I think a lot of these ladies will be choosing to sit down for a chance to see if they have anything in common with him. There's nothing too surprising about Alex from his appearance: he's your typical TV bachelor. He's a good looking guy with a square jaw, he's dressed extra nicely for a first date, and he seems prepared to open up and maybe even get a little bit vulnerable with these ladies... after throwing a joke or two out there.

And, while it's hard to tell before the season's aired whether or not Alex will find a successful relationship on Coupled, as the first guy to make an entrance, I think the women will find that he makes a good first impression and be clamoring for some more alone time with the guy. And, since there's no way to know who else will be appearing on the island next, if the other guys are this appealing, then Alex could be facing some stiff competition in the episodes to come. But, luckily for him, he doesn't have to worry about all that — he just has to focus on standing out. And, I think that should be pretty easy for him to do.

He Has A Good Sense Of Humor

Since he retweeted this, Alex must know that when it comes to dating shows, even the most innocuous gestures can be turned into hilarious GIFs. So, he's getting ahead of the game by embracing the fact that he's being turned into meme after meme.

I don't think this trip to Mexico to participate in Coupled is the first time Alex has traveled far and wide. Right now, he's on a trip to Thailand.

That shouldn't be a problem for most of the ladies in this cast, since a lot of them are also dog lovers, but you can't be exclusively a cat person (or an allergic person) if you want your relationship to go far with Alex.

Here's an unconventional fact about Alex: He's the lead singer and guitarist of a band called Radical Something. According to their Twitter, they should be releasing a new record this summer.

And while he may look clean cut, sometimes he just doesn't feel like wearing shoes. Could be either a sign that he'll match with a fellow free spirit or he'd only click with someone adventurous enough to live up to a two-week long dare.

Hey, even though there's a lot more to a guy than a great physique, there's nothing wrong with admiring Alex's experience as a college football player at UC Berkley and the muscle definition that resulted from it.

And, His Arrival Will Have The Ladies Literally Shaking

Judging from that clip, Alex is excited to potentially meet someone, but the women are practically jumping up and down with excitement over meeting him. Will fights break out over the honor of going out with Alex? That might be a bit extreme, but it definitely looks like the Coupled premiere could feature quite a few love connections.