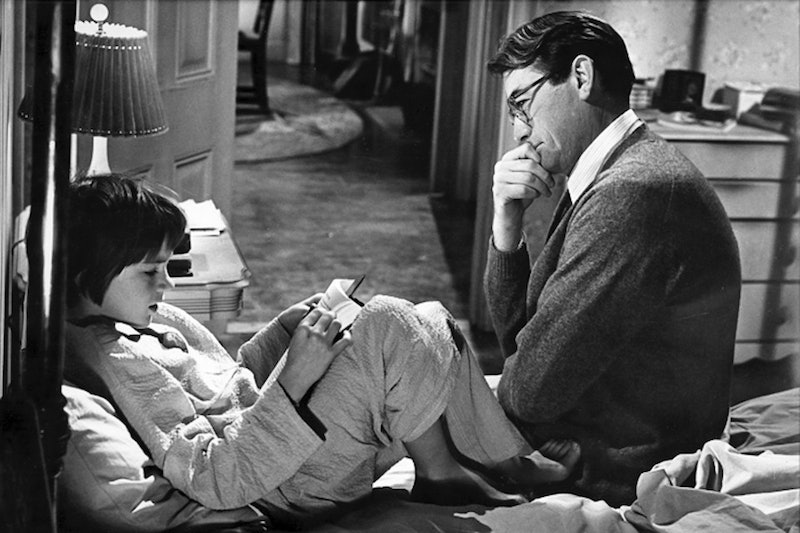 My family always jokes that even though I the spitting image of my mother, I'm my father's daughter at heart. We have the same loud voice, love of peanut butter, and lack of tact in most situation. He once referred to me as a "little hobbit girl" and I like to make fun of his unusually large, square head. We're very close.

Because of my relationship with my father, I have a soft spot for father-daughter relationships in literature. (The good ones, at least. No weird Lolita-esque pairings here, please.) My personal favorite pair was always Elizabeth and Mr. Bennett from Pride and Prejudice. Their banter always reminded me of my connection with my father, and I admired their mutual respect. They each had their flaws, but they were great together.

Maybe you have a great relationship with the father figures in your life, and maybe you don't. But you know that when you really need a dose of fatherly love and affection, you can turn to some of your favorite book dads for comfort. Whether you're looking for someone self-sacrificing like Jean Valjean, or just and kind like Atticus Finch, these book dads had enviable relationships with their daughters.

With their witty banter and mutual respect for each other, it's hard not to be charmed by Elizabeth's relationship with her father. Mr. Bennett isn't always as kind to his other daughters or his wife, but he sees an equal in Elizabeth, someone who isn't quite as silly as the other women in his life. In turn, he respects her decision not to marry the first man who comes along, especially if he's the terrible Mr. Collins.

2. Atticus Finch and Scout Finch, To Kill A Mockingbird by Harper Lee

To be clear, we're talking about To Kill A Mockingbird Atticus and Scout. And Atticus of TKAMB is pretty much the literary dad-to-end-all-dads. He's the personification of bravery and honesty, and he wants to pass these traits on to his children, even going so far to tell Scout not to fight and defend his honor. He risks his professional and personal reputation to defend a black man because he believes it's right. That's quite a role model.

Personally, I think these two are the cutest and weirdest father-daughter pairing ever. Unabashedly quirky and sharing a mutual love of all things unlikely to actually exist, there's no denying that the apple didn't fall far from the tree with the Lovegoods. Reading about the two of them getting so excited about nargles and crumple-horned snorkacks just warms my heart.

Lear's vanity may keep him from winning any "greatest dad" awards, but you can't argue that Cordelia's a pretty good daughter. Rather than offering him flattering but empty words, the way her nasty sisters do, Cordelia is honest about her love for her father, even if it leads to her disinheritance. Luckily mad King Lear comes around in the end and the two reunite before his death.

After the death of her mother, Valjean rescues Cosette from her cruel guardians and runs away with her, giving her an education in a convent. Because he loves her, however, he takes her from the convent and allows her to live in the outside world, where she promptly falls in love with a man who would take her away from her adopted father. Being the fantastic man that he is, Valjean rescues Cosette's lover from certain death, only to find himself separated from his daughter until he's on his deathbed. Daughters, so ungrateful!

Yes, Mr. Woodhouse is a little overbearing and clingy and a bit of a hypochondriac, but that's just because he loves his daughters and his friends so much! He's a kind old man who wants nothing more than for his youngest daughter to stay and keep him company, and Emma doesn't seem to mind doing that. It's constantly mentioned that the two are homebodies, and Emma is even willing to compromise and live at home after her marriage just to accommodate him! OK, maybe their relationship is a little weird, but whatever, it's sweet.

Poor Sara is left destitute after the death of her rich father, forced to work as a maid in the boarding school she once attended. Thankfully, the very rich (and very guilt-ridden) Mr. Carrisford takes an interest in her and secretly begins outfitting her room with gifts and comforts, without even knowing she's the daughter of his dead partner! It's adorable when he realizes who she is and promises to care for her like a father (giving her a share in a diamond mine isn't a bad gesture, either).