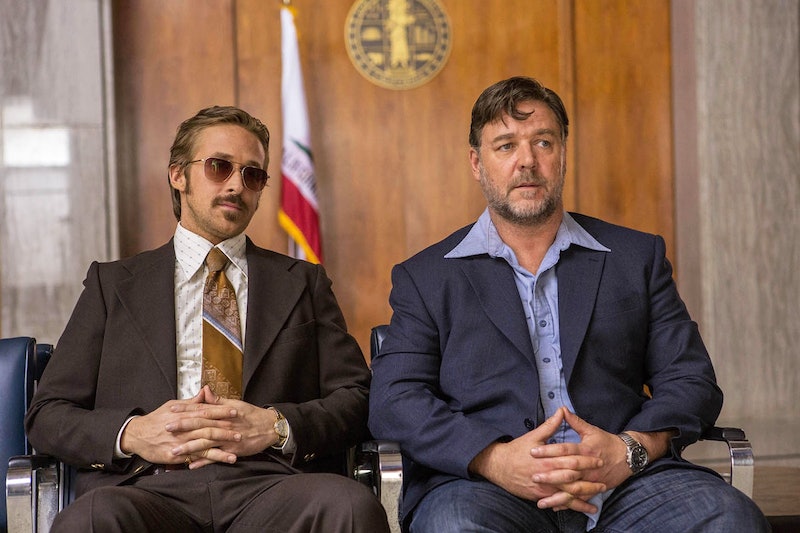 Buddy comedies are by no means inherently original. But that niche is a recognized subset of comedy for a reason. When done well, they're hilarious. And going by the trailers for the Ryan Gosling and Russell Crowe team-up, The Nice Guys is done very, very well. Set in the '70s, this R-rated caper pairs Crowe's hired muscle Jackson Healy and Gosling's sophomoric private investigator Holland March to blunder through a missing persons investigation that ties back to the coke-dusted underworld of Los Angeles organized crime. I didn't live through that decade, but the period details seem accurate to me, starting with both actors' era-appropriate facial hair. So is The Nice Guys based on a true story?

Healy and March are not based on real people, and the disappearance of Amelia Kutner isn't a real case on the books in Southern California. Director Shane Black helmed the production of a script he wrote with collaborator Anthony Bagarozzi, the plot of which is completely fictional. "We each took a character and started writing and then we switched back and forth until we had a plot," Bagarozzi told Variety.

Though there's no juicy real-life details behind the events of The Nice Guys, the script itself has its own rocky history. Black told GQ that the concept of the film dates back to 2001, when "no one wanted" a tangled and funny crime movie. And Black was no Hollywood newbie at the time. He penned the first two Lethal Weapon movies, the surreal fantasy The Last Action Hero, and another odd couple team-up in The Last Boy Scout, among other features. But it still took 15 years to get The Nice Guys off the ground.

When Black's first round of shopping the script around yielded no results, he decided to take the concept to television. Alas, the strictures of network TV meant that The Nice Guys wouldn't find a home there either without its humor and sensibilities undergoing a drastic change. "The Standards and Practices were just going to kill us," Black told GQ. "They were so egregiously offended by even the most minor edginess." CBS passed on the pitch and HBO did too, even though the premium channel would have been able to present a final product closer to Black's irreverent vision.

During the period that The Nice Guys sat in dormancy, Black made a bit of an industry comeback. "I had essentially slid off the map from the time, say, that Long Kiss Goodnight sold for an exorbitant amount of money up until Kiss Kiss Bang Bang," the director told GQ. The Long Kiss Goodnight majorly flopped at the box office despite stars Geena Davis and Samuel L. Jackson, not to mention Black's status as an sought-after action screenwriter. Critics were back on the filmmaker's side when he delivered the sly and referential noir comedy Kiss Kiss Bang Bang in 2005. He reunited with one of the stars of that film when Black directed Robert Downey Jr. and co-write the script for Iron Man 3 in 2013.

Besides Black's restored prominence, another development might account for the end of The Nice Guys' long gestational period. "Thank God it didn’t happen," Black's producer Joel Silver told Cinema Blend about the script's flirtation with television. Because in 2010, Black told GQ, Silver encouraged him to re-frame the story. Black did that by changing the setting from the present day to the late '70s, "and that seemed to be the one that people had more response to." A 2016-set Nice Guys minus its mustaches? Perish the thought.