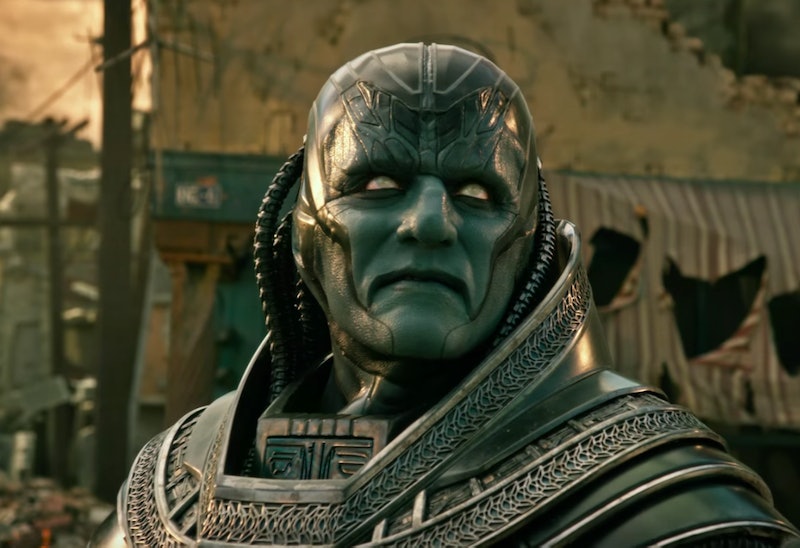 With his thick, blue skin and huge silver armor, Apocalypse is shaping up to be the most formidable villain the X-Men have ever faced. It also doesn't hurt that his name is synonymous with the end of the world. But, for all his ominous threats and imposing stature, there's still a lot about Apocalypse that fans don't know, like, who is Apocalypse and what does he want? Most importantly, what are Apocalypse's powers? In trailers for X-Men: Apocalypse, fans have watched Apocalypse issue menacing monologues and, uh, look evil, but any real demonstration of his powers have been kept pretty well under wraps. All we know is he's regarded as a God. So, what exactly can this guy do?

Well, if you're hoping to find answers in the original comics, prepare to be disappointed. Apocalypse, it turns out, is a very vague mutant villain in the X-Men cannon. He's not just one of the oldest mutants ever, he's almost mythical. The true origin of his mutant powers and the extent to which they have grown over the (hundreds of thousands of) years are unknown.

There are, however, a few educated guesses that have emerged over the years. According to comic lore, Apocalypse grew up in Ancient Egypt, though it stands to reason that he had actually existed long before then, and was born with the power to control all the molecules in his own body. Though this power should make him immune to aging, some kind of "techno-organic disease" has made it impossible for him to live in one body for more than a lifetime, so he has gotten into the habit of transferring his consciousness from one mutant body to another, collecting each mutant's powers along the way. In fact, when we meet Apocalypse in Ancient Egypt in X-Men: Apocalypse, he is spoiler alert! transferring his consciousness into the young, able body of a mutant with the power to regenerate — an immortal, if you will.

Throughout the film, the established powers of molecular manipulation and the ability to collect mutant abilities via body transfer are the only ones that are explicitly shown or explained. However, in the movie Apocalypse never really changes his physical shape, not even to disguise himself or make him more imposing in battle. Instead, he seems to have the power to change the molecules around him, a power that (spoiler alert) allows him to literally turn men into dust, or drywall. Sounds pretty deadly, right?

How could Professor Charles Xavier and his team ever hope to defeat such a powerful villain? Well, based on Apocalypse, it appears that either Apocalypse has a no-kill-mutant policy, or that molecular power doesn't actually work on mutants. (Don't ask me why.) Whenever Apocalypse goes up against a fellow mutant, he doesn't attack on a molecular level. Instead, he goes for the psyche. Throughout the film, he connects telepathically with others, though his power is not as strong as Charles', who has the ability to control the thoughts and actions of others. Apocalypse cannot control minds, but he has plenty of other evil tricks up his sleeve.

Apocalypse's most important powers seem to be those he has accumulated from other mutants. Though, what those are exactly remains equally mysterious. In the film, every time Apocalypse recruits one of his four horsemen, he is able to heighten their abilities. Angel, for example, receives metal wings, while Psylocke, uh, loses her pants and lets her hair down. He's also exceptionally strong, able to teleport large groups of people, and is shown to have the ability to absorb information through a television. (Though, where he picked that one up is anybody's guess considering he collected powers in a time before electricity.)

Bottom line: Apocalypse's powers are so vast, that even the movie doesn't know what they are. The only Apocalypse powers you really need to know about are as follows: 1) He can control molecules (kind of), 2) He can communicate telepathically, 3) He can teleport, and 4) He can enhance a mutant's powers.

There's a whole lot about Apocalypse and his powers that remain a mystery, but as long as he's using his powers for evil, I'm not sure I really need to know more.