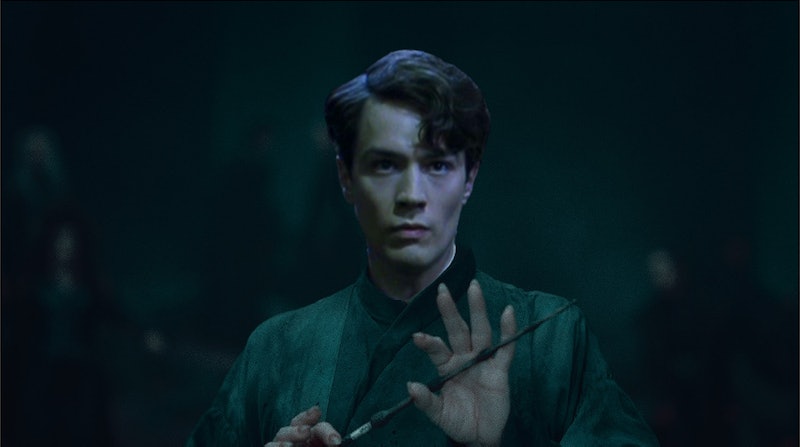 Nearly 15 years ago, the second Harry Potter film, Harry Potter and the Chamber of Secrets, delighted audiences with a darker and spookier tale than its predecessor. The second film in the series gave us the origin story of the franchise's villain by pitting a teenage Lord Voldemort against Harry Potter in an epic final battle. The scene involved a giant serpent, a brainwashed Ginny Weasley, and a huge plot twist. It's undeniably the biggest set piece the franchise had seen thus far, and according to Christian Coulson, who plays Tom Riddle (aka the teenage Dark Lord), it took a whopping eight weeks to film.

"It's unheard of," he said of the amount of time it took to nail the sequence in the chamber. "[The scene] was about 15 minutes long, which is a significant amount of time. But most movies you film in six to eight weeks anyhow, so it's rare to be doing one scene for that long."

If you recall, Riddle emerges in the scene when Harry finds Ginny passed out on the cold, wet floor of the chamber. As Harry desperately tries to stir Ginny, Riddle offers him an ominous warning: "She won't wake. She's still alive, but only just." As Harry slowly realizes Riddle's true identity ("I am Tom Marvolo Riddle"), a basilisk serpent is summoned to kill Harry Potter. But of course, the young wizard protagonist has an inventive solution up his sleeve.

"It's curious to me, a lot of people assume that there is green screen being used in those sequences but there wasn't," Coulson says. "They built that whole thing. A whole aircraft hanger had been transformed into this huge underground chamber." And while it's impressive to say the least, the fact that it was all real meant lighting — and relighting — took literal hours. But that wasn't the only reason the scene took eight weeks to film.

"Dan and Bonnie were both young enough that legally they had to be in class for a certain amount of hours a day, so you could only film certain things," the 37-year-old actor says. "The hardest part was having a three hour break," he says, presumably while Radcliffe and Wright were in school, "then coming back focused and able to concentrate. It's its own weird skill."

But filming the scene wasn't the only thing that was tedious. According to the British actor, auditioning for the role of Tom Riddle took six months. "They knew they weren't going to cast someone who was recognizable," he says, "I was in a casting bracket that is probably the most overpopulated casting bracket there is, which is men in their late teens/early 20s. The casting director called me when I got it and said, 'You were the second person we saw. I championed you all the way through. We saw 2,000 other people before we made a decision.' That was a wild thing to me."

In November, it will be 15 years since Harry Potter and the Chamber of Secrets hit theaters. But even a decade and a half later, it's never too late to revisit the classic. As Riddle says, "Voldemort is my past, present, and future."

More like this
The 'Hocus Pocus' Sequel Finally Has A Release Date & It Makes Total Sense
By Shannon Barbour and Radhika Menon
Alicia Silverstone Has Recreated An Iconic 'Clueless' Scene
By Frances Stewart
S Club 7’s Jon Lee Continues To Reach For The Stars
By Rachel Mantock
“The Door Is Always Open” For Another 'Breaking Bad' Spin-Off, Says AMC Boss
By El Hunt
Get Even More From Bustle — Sign Up For The Newsletter