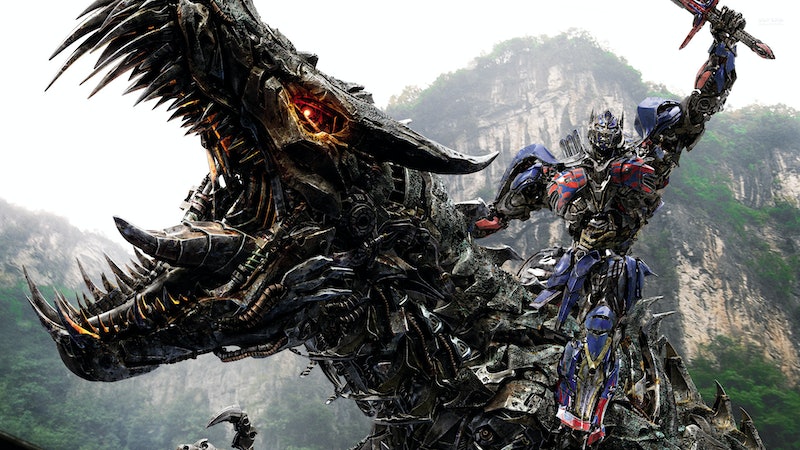 "More than meets the eye" might be the tagline of Hasbro's Transformers, but when it comes to the film franchise based on the toys, what you see is pretty much what you get: movies about giant shape-shifting robot-aliens pummeling each other while attractive humans run around screaming as the sun perpetually sets in the background and an American flag flutters in the breeze. We can make fun of it all we want, but the formula for Michael Bay's Transformers movies has worked wonders so far, raking in $3.8 billion worldwide over the course of four entries. It's no surprise then, that a fifth film is on the way — and we now know it's going to be titled Transformers: The Last Knight .

The announcement came this Monday courtesy of the "transformermovie" Instagram account, which posted a short video of Optimus Prime's face, which faded out into the aforementioned title and then the words, "Production Begins June 2016." The video bears the caption: "Calling all #Autobots: Optimus Prime is ready for battle. Are you?"

But what exactly does "The Last Knight" mean? What kind of knights are we even talking about? Is Transformers really going medieval? (I guess after dinosaurs, nothing would surprise me.) Here are a few theories on what this might mean for the fifth Transformers movie:

After a series or critically-maligned sequels, perhaps the Transformers franchise is trying to get back in our good graces by referencing one of the most-beloved follow-ups in action movie history: the 2008 Batman Begins sequel The Dark Knight. Perhaps we'll even get a psychotic villain who's a free agent that enjoys manipulating Autobots and Decepticons alike, just like the Joker played Batman off the criminal element of Gotham. Or maybe we'll get a good guy who goes crazy when half of his face is burnt off. Who knows?

The success of HBO's Game Of Thrones has spawned a spate of medieval imitators of varying quality, like Vikings, The Last Kingdom, and The Bastard Executioner. Maybe Transformers is simply trying to hop on the medieval bandwagon, filling their next movie with epic sword fights and transformers shaped like dragons and alien-robot incest. (Well, maybe not that last one…)

3. It's A Reference To The Dinobots

A quick search of the word "knight" on the Transformers wiki actually comes up with something pretty significant: a ship called the Knights' Temenos, which was featured heavily in Age Of Extinction. (You know, it's the one that suck up half of Hong Kong and then drops it back down again.) Before the Knights' Temenos served as the personal prison ship for villain Lockdown, it was the transport used by the "Legendary Knights" — aka the Dinobots. Given that Age Of Extinction actually only featured the highly-anticipated dinosaur Transformers for about a half hour of its two-hours-and-forty-five-minute runtime, it would be nice for the sequel to give them even more focus.

Then again, maybe the "knight" in question isn't referring to the Dinobots at all. It could also be a reference to the Knights of Cybertron, the original group of Transformers that inhabited the planet of Cybertron, created directly by their god, Primus, himself. Transformers legend has it that, once they helped establish society on Cybertron, they left the planet to spread enlightenment throughout the galaxy — and Cyberton quickly descended into chaos and civil war without them. Maybe we'll finally meet one of these ancient and original Transformers in the upcoming fifth film.

When the X-Men titled their third film The Last Stand, it definitively marked the end of that franchise. Likewise, by naming the fifth Transformers movie The Last Knight, Michael Bay is signaling that his hyper-successful franchise is wrapping things up.

Not only do we already know The Last Knight won't be the last Transformers movie, we already know Michael Bay has many many many more planned. In fact, he convened a "writers room" to come up with an extended plan similar to the Marvel Cinematic Universe, which will apparently include a Bumblebee-centric spinoff, a prequel, various crossovers, and — naturally — more sequels to the main franchise.

Transformers 5 may call itself The Last Knight, but it certainly won't be the last we hear from Optimus Prime and the Autobots.