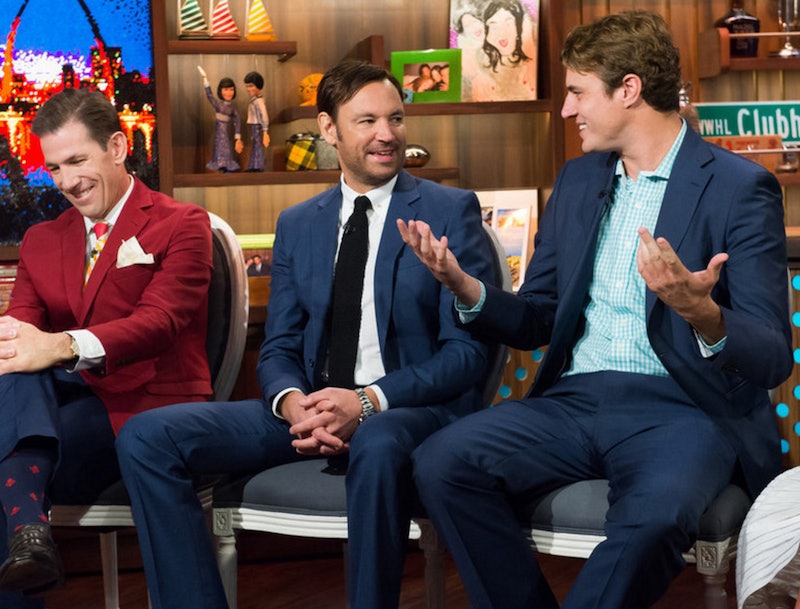 Strained group dynamic be darned, the Charleston Charmers are going to the Appalachians! On last week’s Southern Charm, Shep asked a few of his cast mates whether they’d be up for a trip to his parents’ stunning mountain abode, and I worried that the ongoing Kathryn drama would derail the excursion entirely. Would Shep exclude Kathryn and upset Kathryn and T-Rav? Or would he include Kathryn and upset Cameran and Whitney? Or would he cancel the whole shebang? What’s a peace-loving Shep to do? At the top of Monday night’s Southern Charm, Shep and Craig —the two card-carrying members of Team Inclusion — discussed whether or not Kathryn would be invited to Linville with the rest of the group. Well, it looks like their worries were all for naught; Much to Team Inclusion’s relief, the guest list worked out in a fairly drama-free way.

Over fruit plates and cocktails, Shep told Craig that Whitney and Cameran would not go if Kathryn was present, but didn't want leave anyone out. Craig said he was certain that Whitney’s jealousy of the Kathryn/T-Rav 'ship was to blame for this rift, and he concluded that Shep should just invite Kathryn regardless of what everyone else thinks. So, Shep called Kathryn and asked if she’d like to go to Linville, North Carolina with the rest of the cast. Team Inclusion would stick to its name if it was the last thing it did.

Kathryn thanked Shep for the invite, but graciously declined. She told Shep she was on bed rest, and road tripping up to the Appalachians in a party bus sounded like the opposite of that. After Shep hung up the phone, Team Inclusion breathed a giant sigh of relief; They were happy Kathryn’s feelings weren’t hurt and that the rest of the crew would be happy with the guest list. Their inclusion/exclusion worries were over. All was well!

Or so they thought.

On the way to Linville, the cast pulled over in Asheville, went barhopping, and stayed overnight in a hotel. The next morning, the cast said goodbye to a Charleston-bound T-Rav, boarded Shep’s party bus, and prepared to to head to the mountains.

…Everyone but Cameran and Whitney, that is. They let the rest of their cohort know that they rented a car and would drive themselves up to Shep’s parents’ house. They had no interest in cruising up the small, winding roads in that giant, lumbering vehicle. Shep and Craig seemed a little put off by this, but they ultimately didn’t make a big deal of it. Team Inclusion wasn't about to start micromanaging this decision.

And as for the party bus? How did it handle getting shunned by Cameran and Whitney?

Well, rumor has it that the party bus spent the next couple of days trying to figure out what it did to deserve getting rejected like that on national television. I’ve also heard that the party bus is really hurt and doesn’t want to talk about it. Still. So, I guess it's safe to say it cut deep.