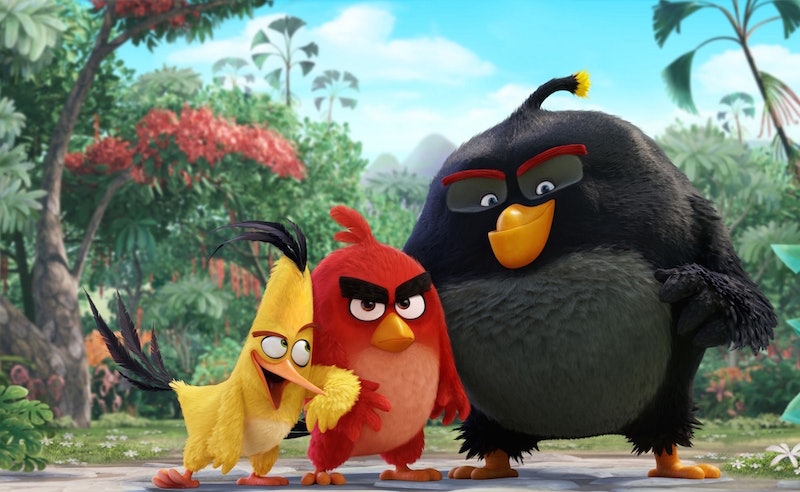 For a movie based on an iPhone video game, The Angry Birds Movie is turning out to be a huge production. The movie, in theaters May 20, had an $80 million budget, was penned by The Simpsons writer Jon Vitti, and features the voice talents of a ton of A-listers. Seriously, The Angry Birds Movie voice cast is more star-studded than the Milky Way. The actors who voice the various characters all have different performing backgrounds; some have worked mostly in TV while others are primarily film stars, some are best known for one major role while others have a more varied resume, and some are typically associated with comedic projects while others are known for their work in dramas.

That being the case, it seems likely a pretty unlikely mix of stars; I mean, would you have ever expected to see Sean Penn, Kate McKinnon, and Peter Dinklage all on the same marquee? But all of the actors have one thing in common: amazing vocal talents that perfectly lend themselves to a comedic animated project like Angry Birds. So without further ado, here are all the A-listers that make up the delightfully surprising cast of The Angry Birds Movie .

This SNL vet — who is now a bona fide film actor — stars as Red, a temperamental bird who has to step up and fight against a slew of evil green pigs who have stolen eggs from the birds' island.

The actor behind Frozen's Olaf gives his voice to The Angry Birds Movie as the speedy yellow bird Chuck.

Comedy star Danny McBride joins the cast as Bomb, a bird who is aptly named for his tendency to explode.

Another SNL actor-turned-movie-star provides the vocals for a former "angry bird" named Matilda, who now teaches an anger management class for other birds.

Hader tackles the roles of Leonard, who is the leader of the dreadful green pigs. His character's beard is equally dreadful.

The GOT star plays the Mighty Eagle, who is a sort of demi-god to the birds of the island.

Despite being an active cast member on SNL, McKinnon found the time to provide the vocals for a small but feisty pink bird named Stella.

The Oscar winner must have a sense of humor, seeing as his Angry Birds character Terence does not actually speak, only growls.

Although a part of me only wants to think of Tony Hale as Buster Bluth, the Arrested Development actor has since shown his versatility, and he actually plays three different characters in The Angry Birds Movie.

The former MADtv star (who is also half of the comedy duo Key & Peele) appears in Angry Birds as a bird judge named Judge Peckinpah.

Shelton both wrote a song for the movie and appears as the country-singing pig Earl, complete with a cowboy hat.

Fresh off his highly-praised performance in The Unbreakable Kimmy Schmidt, Burgess plays a green pig photographer with the creative name Photog.

It takes a true fashionista like Charli XCX to pull off the striped hat worn by her character Willow in Angry Birds.

Eichner takes a break from his Billy on the Street interviews to give voice to Angry Birds characters Philip and Chef Pig.

The Workaholics actor plays a few different birdies in the new movie.

The Angry Birds Movie gets an appearance from OINTB cast member Danielle Brooks, who plays the blue bird Olive Blue as well as a crossing guard bird.

If you look deep into the ensemble cast, you'll find even more familiar names. One thing is for sure: although the characters in The Angry Birds Movie are small, the film is big on star power.