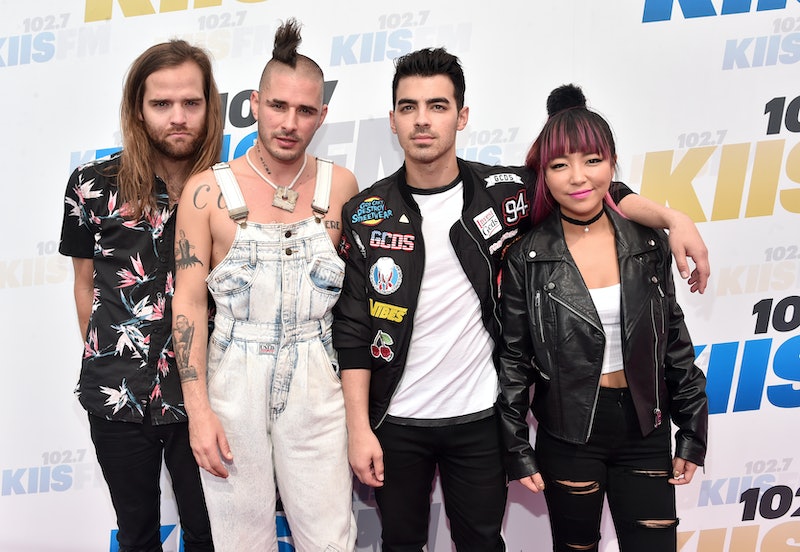 Who would have thought that two-thirds of tween boy band the Jonas Brothers would be slaying the charts in 2016? Nick Jonas is out there being a hot pop star, and Joe Jonas kind of shocked me when he went the pop-rock route and dropped a song with his mysterious new band, DNCE. I was loving Nick's sultry R&B, but didn't expect to really, really love DNCE's first single, "Cake By the Ocean," which became a huge hit because it's ridiculously catchy, let's be real. It seemed quite random that Joe Jonas suddenly had a band behind him, but since I expect them to be around a lot this summer, who are the other members of DNCE?

DNCE's infectious brand of funk pop and their EP, Swaay, is already setting itself up to be the perfect soundtrack for this summer. The band is also getting huge exposure as the opening act on Selena Gomez's Revival Tour throughout the rest of the summer, and they just released the video for their second single, "Toothbrush."

If you're a fan, get ready for a lot more of this band, so without further ado, here's a little bit more about DNCE's other three very important band members.

Lee is the only woman in the all-man band. According to her Instagram bio, she "came to LA from Korea with my Guitar & Faith… And God’s grace never left me!” From this, I can gather she and Jonas share their Christian faith, but how did she get to be DNCE's guitar player? Lee attended the Guitar Program at Musicians Institute College of Contemporary Music and scored her first big music gig as Jordin Sparks' lead guitarist in 2009, according to the institute's website. The website also notes that before DNCE, she toured with musicians including, Cee Lo Green, the Jonas Brothers, Ciara, and Charli XCX. Lee told The Outfit in a 2015 interview of how she met Jonas, "Joe and I have been friends for years. I played guitar for Jordin Sparks in 2009 when she opened for the Jonas Brothers. I met Joe then and we were instantly cool."

Cole Whittle is probably the most outlandish of DNCE members, and his style will never disappoint. Whittle was the bassist of NYC band, Semi Precious Weapons, and opened up for Lady Gaga's Monster Ball tour from November 2009 until December 2010, according to the Gagapedia. In an interview with Epiphone in 2010, Whittle revealed that he attended prestigious music college, Berklee College of Music. Not bad.

Jack Lawless has been a part of the Jonas Brothers family for a very long time. He was formerly the Jonas Brothers' drummer, according to Boston Music Spotlight. Jonas shared with InStyle of how they all decided to come together after so many years,

I've known Jack and JinJoo for over 10 years. We toured together, and I've seen them play with other amazing musicians. Jack and I were roommates at one point and we had this idea to create a band, and the time came around when it was appropriate to make it really happen.

It seems like this DNCE line-up is already making a lot of magic together, so I have a feeling they will stick around for a while.