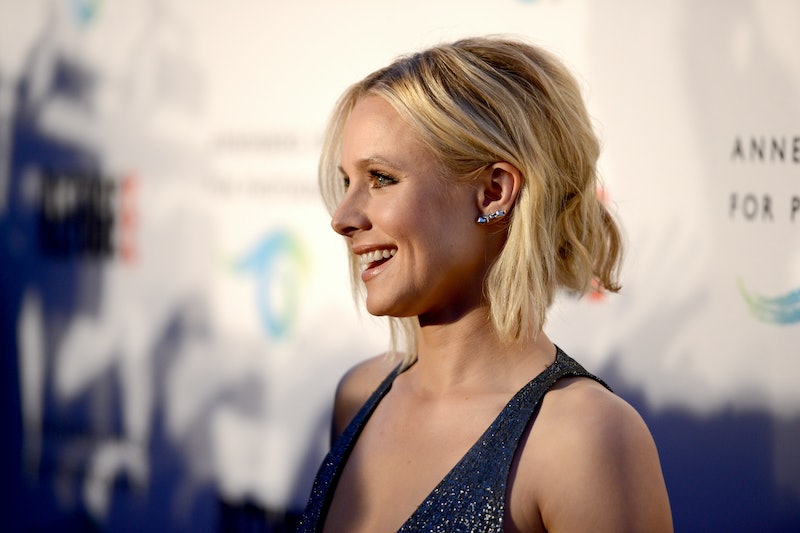 Veronica Mars is returning to TV in Kristen Bell's comedy The Good Place , coming this fall to NBC. In the Michael Schur sitcom, she plays a New Jersey woman named Eleanor who gets hit by a truck advertising an erectile dysfunction drug and ends up in heaven, but, unfortunately, by total mistake. In the trailer, which premiered at the NBC upfronts, we watch Bell get to be a little dirty, but in a very G-rated way. See, in this version of heaven, Bell can't seem to curse, but she can make us laugh with censored expletives like "forked up," "bull shirt" and "bench." For those who immediately think Frozen when they think of Bell, seeing her in this out and out comedy may seem unexpected. But Bell's been making us laugh for years; she's just never been given a real chance to be the comedy star we know she can be.

Often, Bell is cast as the straight (wo)man who gets to be the audience's surrogate. Sure, Bell is funny in The Boss, but it's Melissa McCarthy who gets to be over the top and ridiculous, while she gets to be frustrated or patient with Michelle Darnell. Always in a funny way, but never in a way that makes you think she's the real star of this movie.

Bell is hilarious as the titular character in Jason Segel's Forgetting Sarah Marshall, perfectly skewering procedural television in a fake CSI-like show called Crime Scene: Scene of the Crime. One will never know how she managed to keep a straight face while filming any of those scenes with Billy Baldwin, but, once again, she's a supporting player. Viewers are meant to forget Sarah Marshall, not root for her.

Perusing Bell's IMDb page reveals lots of parts like this; funny bit roles that make you laugh, but maybe don't get you saying, "Boy, that Kristen Bell is hilarious!" On The Good Place though, she's getting her Melissa McCarthy moment. One in which she's telling people to "eat her farts" and storing cocktail shrimp inside her bra. Bell gets to be a little kooky, something she hasn't fully gotten a chance to be since her supporting role in the TV movie, Reefer Madness: The Movie Musical, which is a tongue-and-cheek take on the 1936 anti-marijuana propaganda film of the same name. Bell gets to be Mary Lane, who is perfect in every way until she smokes a little pot and turns into a dominatrix.

But the kind of kooky Bell gets to play on The Good Place is a little more down to earth, perhaps more like she is in real life. Certainly, there's nothing kookier than crying over a sloth, something Bell did very publicly. As she told Ellen DeGeneres, "If I'm not between a three and a seven on the emotional scale, I'm crying. I'm crying if I'm too sad, I'm crying if I'm too happy. Always."

That, in itself, is a funny statement, and one that should give any director the sense that this woman is going to be hilarious. It seems Michael Schur, known for Parks and Recreation, got the message loud and clear. Schur even previously cast her in a bit role as a very put together councilwoman on Parks and Rec. But here, he's letting Bell get at that range of emotions, from three to seven and everything in-between. Bell's finally getting the chance to show that she's more than a funny bit-player, she's a really hilarious leading lady. It's about time.